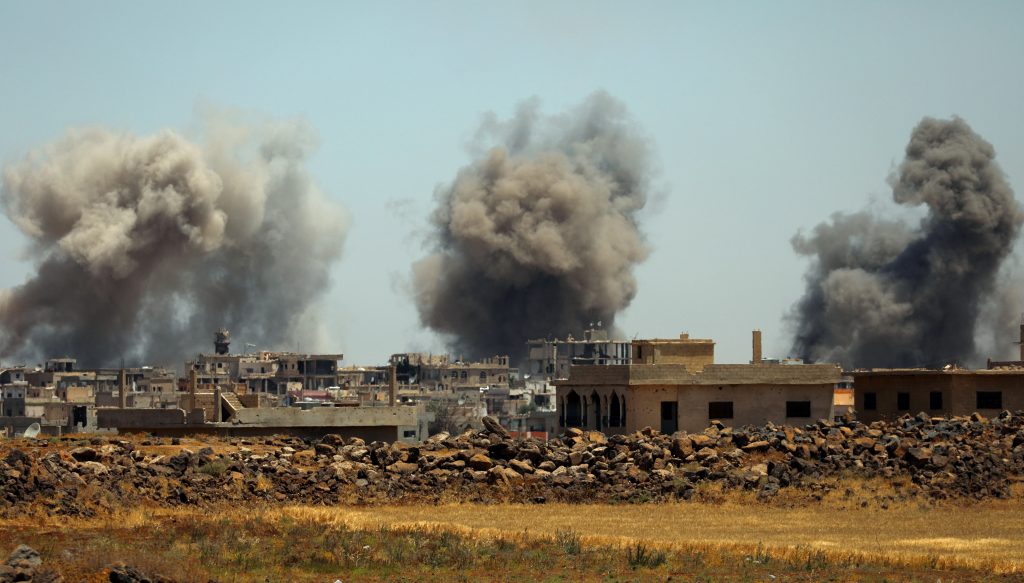 Government helicopters dropped barrel bombs on the city of Deraa on Monday for the first time in nearly a year, a rebel and a war monitor said, extending an assault in southwest Syria.

Along with the barrel bombs – containers stuffed with explosives – the helicopters dropped leaflets saying the army was coming and urging people to “kick out the terrorists as your brothers did in eastern Ghouta,” the sources said.

The region is politically sensitive because of its location near Israel and Jordan and the existence there of a “de-escalation” deal agreed between the U.S., Jordan and Syrian government ally Russia.

Washington has warned Syrian President Bashar al-Assad and his Russian allies that violations of the deal would prompt a response, but rebels said it had also told them not to expect any American military support.

Assad has turned to the southwest after driving rebels from their last besieged enclaves in western Syria, including eastern Ghouta near Damascus, earlier this year.

It is one of two major areas still held by the rebels, along with Idlib province on the border with Turkey in the northwest. Deraa, the southwest’s largest city, was an early center of the uprising against Assad in 2011 and has been split into rebel and government sectors for years.

Recent fighting has focused on the town of Busr al-Harir, halfway along a narrow rebel salient stretching into government areas northeast of Deraa. If taken, it would split that salient in half, putting the northern part under siege.

The pro-government al-Watan newspaper reported on Monday that the army had advanced into Busr al-Harir.

The war monitor, the Syrian Observatory for Human Rights, reported fierce fighting inside the town between the army, along with allied militia, and rebel factions.

But Abu Shaima, spokesman for a central operations room for rebels fighting under the banner of the Free Syrian Army (FSA), said the insurgents had foiled attempts to advance.

Jordan’s foreign minister said his country, already hosting hundreds of thousands of refugees, would not take in Syrians fleeing fighting in the southwest. “We demand that the de-escalation agreement … be respected,” Ayman Safadi said on Twitter on Sunday.

On Sunday, an airstrike hit a medical center in Busr al-Harir, causing extensive damage but no casualties, said the Union of Medical Care and Relief Organizations, a medical charity that works in opposition-held parts of Syria.

The bombardment has killed about 30 people since it began on June 19, the Observatory reported.

The Syrian military said in a statement carried by state media on Monday it was committed to protecting civilians in the area.

Russia also said on Monday it had helped the army repel a terror attack in the southwest, killing 70 rebel terrorists. Syrian state media reported that rebels shelled the nearby city of Sweida.