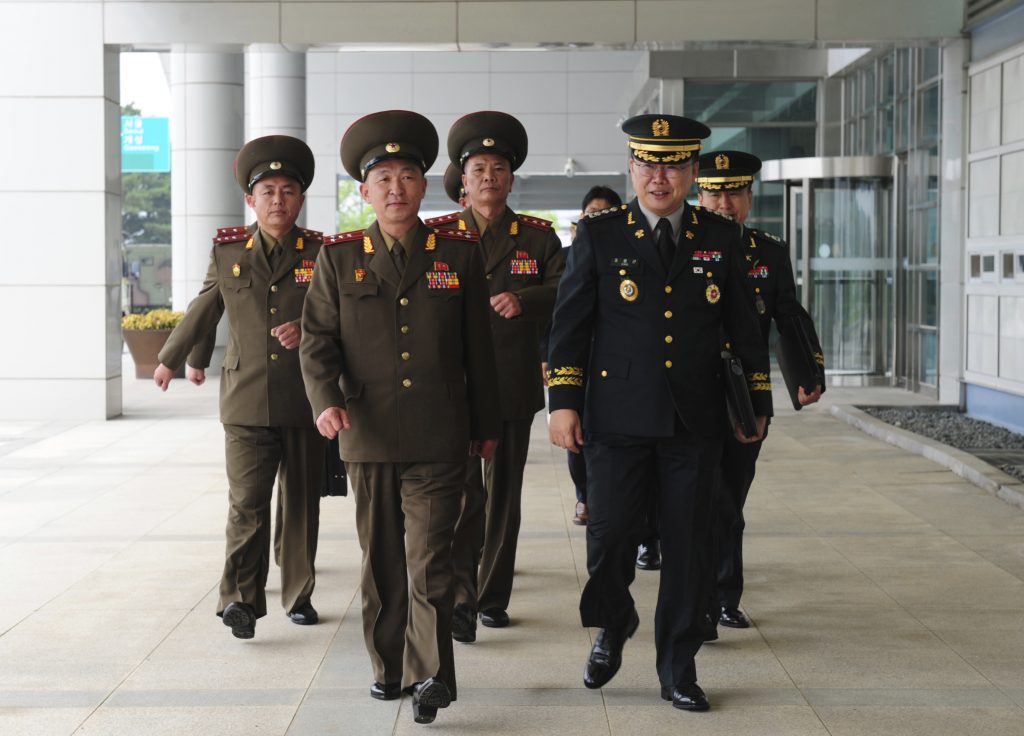 The rival Koreas are discussing the possible relocation of North Korea’s long-range artillery guns away from the tense Korean border, South Korea’s prime minister said Monday, as the countries forge ahead with steps to lower tensions and extend a recent detente.

If realized, it would be yet another conciliatory step by North Korea since it entered talks on giving up its nuclear weapons earlier this year. But some experts say it might be a tactic to push Seoul and Washington to withdraw their more sophisticated artillery systems from front-line areas in return for pulling back its outdated conventional weapons.

In a speech marking the 68th anniversary of the start of the 1950-53 Korean War, Prime Minister Lee Nak-yon said that “moving [North Korea’s] long-range artillery to the rear is under discussion,” as he explained what types of goodwill steps between the Koreas have been taken in recent months.

Lee’s comments appeared to be Seoul’s first official confirmation of media reports that South Korea demanded that North Korea reposition its forward-deployed artillery pieces during inter-Korean military talks on June 14. Seoul’s Defense Ministry, which has denied those reports, said it had no immediate comment on Lee’s speech.

North Korea has deployed an estimated 1,000 artillery pieces and rockets along the 155-mile border, putting the Seoul metropolitan area within its striking distance. Seoul, a capital city with 10 million people, is about 25-30 miles from the border.

Many experts have called the North Korean artillery threats “significant” because it can inflict massive casualties and devastate much of Seoul in the initial hours of a war before the much-better-equipped U.S. and South Korean militaries could fully respond.

But there are also views that such an assessment may be an exaggeration as the North’s artillery guns in general have poor accuracy and cannot destroy hard concrete structures. During a North Korean artillery strike on a South Korean border island in 2010 that killed four people, 90 of the 170 shells fired by the North fell into the sea while 30 of the 80 shells that reached the island didn’t explode, according to military commentator Lee Illwoo.

North Korea’s pullout of its artillery would be “meaningless” or a symbolic “gesture for peace,” Lee said.

Shin Won-sik, a retired three-star South Korean general, said in a newspaper column last week that the South may not be able to find any place to reposition its artillery assets in densely populated rear areas if it pulls them from the border.

North Korea has said it’s willing to give up its nuclear program if it’s provided a reliable security assurance from the United States. But it hasn’t taken any serious steps toward disarmament while repeating a vague pledge to achieve “complete denuclearization of the Korean Peninsula,” a phrase it has used in the past when it requested the United States to withdraw its 28,500 troops from South Korea and stop military exercises with the South.

South Korea and the United States recently announced the suspension of their annual military exercises called Ulchi Freedom Guardian and two other small-scale drills in part of efforts to increase the chances of successful nuclear diplomacy with North Korea. Some experts say the drills’ suspension could weaken the allies’ combined defense posture against North Korea.

The U.S. military said Saturday it moved 100 wooden coffins to the inter-Korean border to prepare for North Korea’s return of the remains of American soldiers who have been missing since the 1950-53 Korean War. The two Koreas last week also agreed to restart temporary reunions of families separated by the war in August.