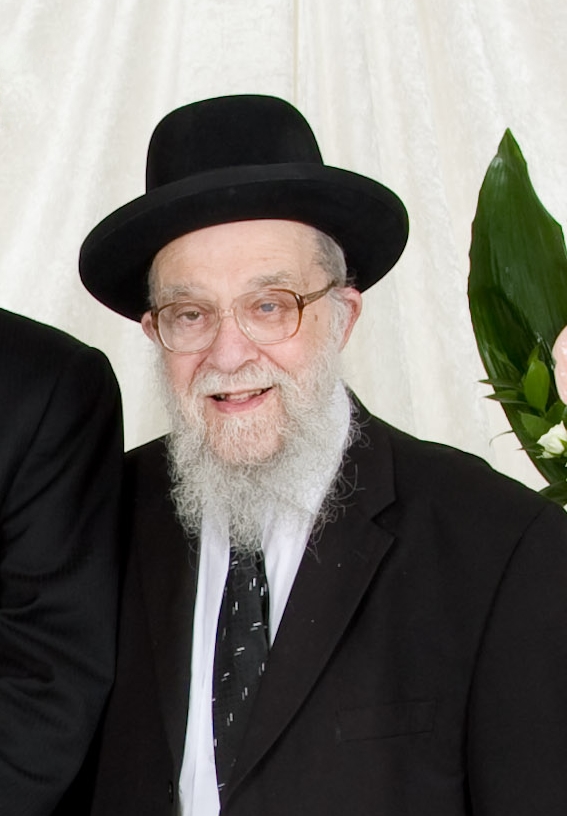 The Gateshead kehillah, together with the whole community, were greatly saddened by the petirah of Rabbi Yosef Lehmann, zt”l, in the final hours of last Shabbos. Rabbi Lehmann was a much loved and respected figure in Gateshead, where he had lived for over seventy years. He was popular with everyone who had contact with him; and his influence was felt worldwide. Through the establishment of his business, Lehmann’s has become a household name across the globe.

Yosef Lehmann was born 92 years ago in the town of Karlsruhe, Germany, near the French border. His father was an upright businessman who infused his family with a strong sense of yashrus, yiras shamayim and ahavas hamitzvos. Yosef was his second son, and was only five years old when his father sensed the dangers that would soon emerge in Germany. With a wise insight that unfortunately many other people lacked, his father decided to use his business connections and emigrate with his family to England. In 1931, the Lehmann family settled in Highbury, London among the nascent Adass Yisroel kehillah that had recently been formed. Unfortunately, their father was suddenly niftar in 1935, leaving their mother to bring up the family on her own. She undertook this task with much devotion to her children. She arranged that the three boys should learn with Rabbi Tarshish. She also had boarders in the house, and invited bachurim to the Shabbos seudos to say divrei Torah and to sing zemiros, in order to bring the ruach of Shabbos to the table. Her young teenage boys were enrolled in the Jewish Secondary School, led by Rabbi Dr. S. Schonfeld. After they graduated from school, their mother asked a Gadol if the boys should go to learn full-time in yeshivah. The older son, Manfred Lehmann, was told that he should rather help his widowed mother support the family. He subsequently married and lived to a ripe old age and completed learning the entire Shas a few times.

Since his older brother went into business to support their mother, in 1942, Yosef was sent to join Gateshead Yeshivah. During the war years, the number of bachurim in the yeshivah was greatly increased by the influx of refugees. Yosef was recognized as one of the most outstanding talmidim, excelling in hasmadah. After a few years, he joined Gateshead Kollel, under the leadership and guidance of Harav Dessler zt”l. Since a bachur could not expect to find a shidduch without having a source of parnassah, several bachurim, including Yosef, were paid members of the kollel, and they ate and slept in the kollel building.

In 1951, Rabbi Lehmann married his worthy eishes chayil, tlch”t the eldest daughter of Harav Yisroel Ehrentreu zt”l, the founder of the Jewish Day School in Manchester and father of ylch”t Dayan Chanoch Ehrentreu. She enabled him to devote all his time to advancing in learning. Rabbi Lehmann was an outstanding masmid, a talmid chacham and lamdan. On Chanukah, he lit the menorah and immediately returned to the beis medrash to continue learning. He learned in the kollel for a few years. Rabbi Dessler was most impressed by his straightforward honesty, and asked him to become the part-time secretary of the kollel.

Already in his yeshivah days, Rabbi Lehmann became involved in importing sifrei kodesh. Since there were no sefarim printed in England, he was asked to try and have a sefer sent from America for someone in Gateshead. When he was successful in that mission, another person asked him to perform a similar favor. This was repeated a few times. Bachurim and yungeleit began to come regularly to him, as he had become quite proficient at getting sefarim sent to England. In return for the time and effort that he gave, Rabbi Lehmann charged a small marginal profit.

Despite his very busy schedule, he was a devoted father. His children enjoyed conversing with him on all manner of subjects and relished his wit and puns. He was also happy to help with his children’s math homework, and to supply a synonym from his excellent grasp of English. In the summer holidays, they enjoyed his company on hikes in the Lake District. The Shabbos seudos were replete with divrei Torah, carefully thought-out questions and discussions based on the sedrah, and zemiros sung with gusto.

Eventually, Rabbi Lehmann decided that he would choose supplying sefarim as a parnossah, viewing his business of selling sifrei kodesh as a unique method of harbotzas hatorah. Supplying talmidei chachamim, ba’alei batim and bachurim with sefarim was like providing a craftsman with the tools of his trade. Without a plentiful stock of sifrei rishonim v’acharonim, no learning in depth could take place. That was constantly on his mind. For this reason, Rabbi Lehmann’s primary concern was to ensure the quick dispatch of any sefarim that were ordered. He would not wait to invoice his customers, since he was more concerned that they should be able to use the sefarim. The invoice would follow later. He also offered very generous discounts to any ben Torah, even though as a result, his profit margin was greatly reduced. This was truly his avodas hakodesh, and resulted in harbotzas hatorah to the whole world.

During his many years in business, Rabbi Lehmann demonstrated his outstanding midas habitachon. Like many other enterprises, his business sometimes went through a period of decline, yet he was never overly worried or depressed. He was always forgoing to others in business matters, even when he suffered a loss as a result.

He not only sold sefarim and knew exactly where to find each one in a flash, with its price and discount computed in his head, he also had an encyclopedic knowledge of the thousands of sefarim that were piled all over his house, and could advise the customer of the precise sefer that would suit his needs. All customers who entered his shop would always find him cheerful and optimistic. Buying a sefer became an experience of chizuk for his customers. Despite dealing with hundreds of customers and their taxing requests each day, Rabbi Lehmann always remained unruffled, with a dry sense of humor that succeeded in putting everyone at ease. When a bachur once asked him, “if by chance Rabbi Lehmann would have some dollars,” he wryly replied that “Nothing happens by chance!”

However, Rabbi Lehmann took his responsibilities very seriously. When the supply of newly published sefarim became too great for him to handle alone, he decided to go into partnership. As a result, the new warehouse in Jarrow was opened. But he was involved in the business right up until his last year.

He davened in the Kollel Beis Hamedrash for about seventy years, acting as the baal korei for fifty years. Ill health made the last years of his life difficult’; but he refused to forgo his daily routine. In his last year, he would start getting up in the morning eighty minutes early, in order to be on time for Shacharis. Despite considerable suffering, he wouldn’t complain nor lose his composure or sense of humor.

The levaya was attended by a great mass of the Gateshead kehillah. In the absence of the Mara d’Asra, the maspidim were led by Harav Yankel Ehrentreu with Harav Avrohom Yeshoshua Ehrentreu. Rav Binyomin Lehmann, son of the niftar, spoke movingly about his father, followed by Rabbi Yosef Shloime Goldstein, his son-in-law. All the maspidim described the Ahavas haTorah of the niftar. He truly embodied the virtue of “hatznea leches” and “boreach min hakavod” — fleeing from any attempt to give him honor. His yashrus in business was legendary.

The levaya passed through London, where Rabbi Shimon Winegarten was maspid in Munk’s Shul. Rabbi Winegarten described the ability of the niftar to make everyone feel at ease, with a good vort for a talmid chacham and an ordinary Yid alike. He concluded that “there was no-one in the world who had something bad to say about him!”

The levaya took place in Eretz Yisrael on Monday in Bnei Brak. Rabbi Lehmann leaves behind tlch”t his wife, sons, daughters, sons-in-law, daughters-in-law, grandchildren and great-grandchildren who are all bnei Torah following in his worthy ways.