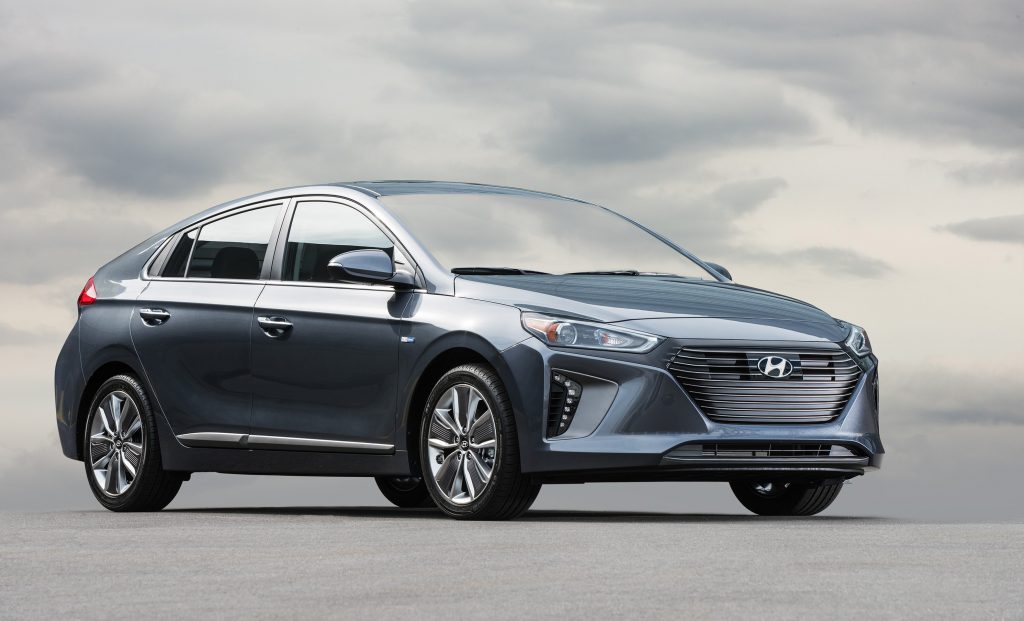 The compact Ioniq Hybrid, introduced last year to be Hyundai’s direct competitor to the popular Toyota Prius, entered its second year for 2018, with a starting price of $22,200 (plus $885 freight) for the base Blue model, and it ranges as high as $27,550 for the top-of-the-line Limited.

In between is the SEL model for $24,000. And all new for 2018 is the Ioniq Plug-In Hybrid, which can go up to nearly 30 miles on battery power alone before recharging, but also can continue in gasoline mode as well.

Also available is the Ioniq Electric, which starts at $29,500, and is powered by battery only. The Ioniq Electric has a range between charges of about 124 miles, but the lithium-ion battery can be recharged to at least 80 percent of full charge in about 23 minutes, using a Level 3 fast charger.

With these variants, Hyundai became the first automaker to introduce the same vehicle in three electric configurations: a conventional hybrid; a plug-in hybrid that gives owners both a regular hybrid setup and an EV drive mode; and a pure EV version similar to the Nissan Leaf and Chevrolet Bolt. The electric model is available at dealerships in California, or only by special order at dealers outside California.

The first version to arrive was the Ioniq Hybrid, which has a maximum EPA fuel-economy rating of 58 mpg — better than the most-fuel-efficient Prius. That’s for the base Blue model; our tester, the Hybrid Limited, has a rating of 55 mpg city/54 highway/55 combined.

With the Ioniq Plug-In Hybrid’s range of more than 29 miles on a full charge, Hyundai says owners who have short daily commutes might not need to buy gasoline very often. The gasoline engine kicks in when the battery gets low, or the driver switches to “Sport” driving mode.

For this report, we tested the Ioniq Hybrid Limited, which, like the SEL model, has the slightly lower EPA ratings than the Blue model. The Blue version is rated 59 mpg city/57 highway/58 combined. (In comparison, the base Prius is rated 54/50/52.)

Outside, the Ioniq Hybrid is similar to the regular Prius, including having the two glass panels in the rear liftgate — the larger one on top, and a smaller one underneath. As with the Prius, the Ioniq seats up to five people. It’s an inch shorter and two inches wider than the Prius, but has five cubic feet more interior space overall.

Another key difference is that the Ionic Hybrid and Plug-In Hybrid come with a six-speed double-clutch automatic transmission, while the Prius comes only with a continuously variable automatic.

Having a conventional transmission gives the Ioniq a more-conventional and sportier driving experience than the Prius, particularly when the gearshift lever is pushed to the left to engage the Sport mode.

That raises the shift points, keeps the gasoline engine on full-time, and allows for spirited driving. When quick pickup for passing is necessary, the Sport mode is the best choice.

Hyundai designed the Ioniq to be much more of a driver’s car than hybrids such as the Prius. The goal is to give consumers a car that does more than just conserve fuel — it also can be fun to drive.

The hope is that a better driving experience might attract buyers to the Ioniq who otherwise probably would not consider a hybrid. Hyundai says the Ioniq was designed to compete against regular compact sedans such as the Chevrolet Cruze and Ford Focus, although it’s clearly a great competitor to the Prius. Prices are in more line with those conventional compacts, though, so there’s no big cost premium for the hybrid drive system.

Hyundai says the Ioniq name is a combination of “ion” and “unique,” with the “ion” part signifying that it’s electrified.

Our tester had a fairly smooth ride even on some slightly rough (potholed) roads, and the cabin was generally quiet.

Overall roadhandling was more crisp and sure than that of the Prius, as well, and in Sport mode, we had better acceleration.

To help keep the weight down, the Ioniq was designed with an aluminum hood and liftgate, and it also has no conventional 12-volt battery to power the starter and other accessories. Instead, four cells of the large lithium-ion battery pack are used to create a 12-volt power source, eliminating the weight of the traditional 12-volt battery.

Under the hood of the Ioniq Hybrid is a 1.6-liter Atkinson-cycle four-cylinder gasoline engine, paired with a 32-kilowatt electric motor.

Because the lithium-ion battery is under the rear seat, the Ioniq has a roomy cargo area, with 26.6 cubic feet of space. There is no spare tire, however, just a “tire mending kit,” which as most of us know doesn’t always work, especially when the tire blows out or has damage.

Recyclable or renewable materials are used throughout the car, including an interior that is 25 percent made of sugar cane.

The only other extra was the carpeted floor mats ($125). The exterior of our vehicle was the pleasant Ceramic White color, and we had the beige interior — seats, dash and doors.

Total sticker price for our Ioniq Hybrid Limited was $31,560, including freight and options.

Highlights: All new for 2017, the Ioniq Hybrid is similar to the Toyota Prius, but with a roomier interior, better fuel economy, lower starting price, and a conventional automatic transmission instead of a continuously variable automatic. It will also come in pure electric and plug-in hybrid configurations.

Negatives: Back seat a tight fit for three people (common in this segment).