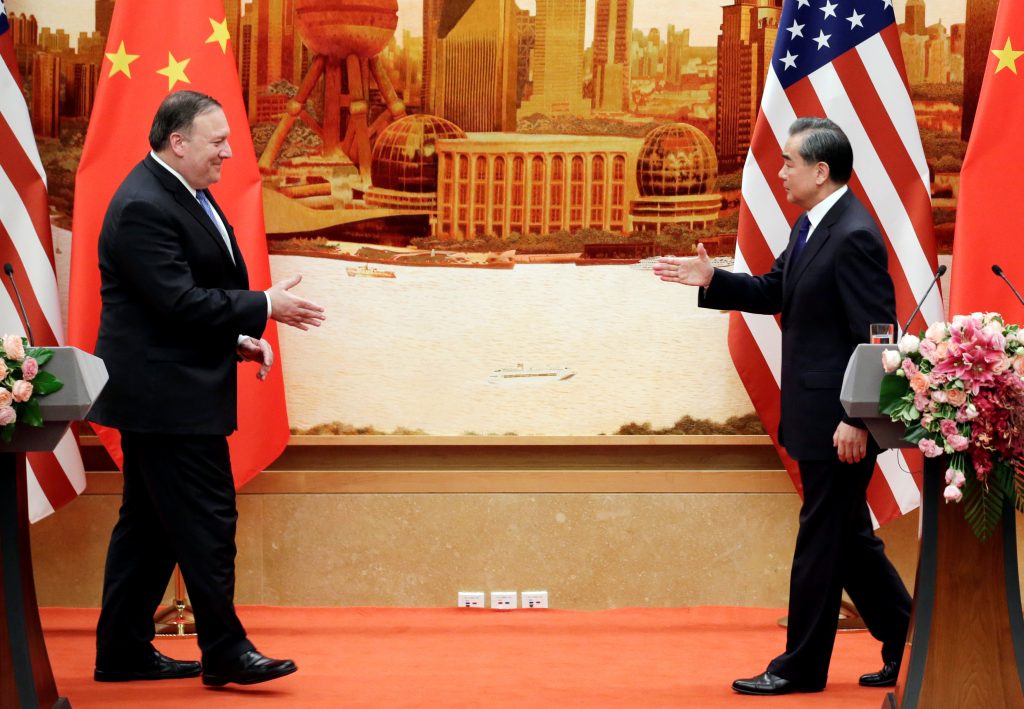 Tough sanctions will remain on North Korea until its complete denuclearization, the U.S. secretary of state said on Thursday, apparently contradicting the North’s view that the process agreed at this week’s summit would be phased and reciprocal.

President Donald Trump and North Korean leader Kim Jong Un issued a joint statement after their Singapore meeting that reaffirmed the North’s commitment to “work toward complete denuclearization of the Korean Peninsula, while President Trump “committed to provide security guarantees.”

“President Trump has been incredibly clear about the sequencing of denuclearization and relief from the sanctions,” Secretary of State Mike Pompeo told reporters after meeting South Korea’s president and Japan’s foreign minister in Seoul.

“We are going to get complete denuclearization; only then will there be relief from the sanctions,” he said.

North Korean state media reported on Wednesday that Kim and Trump had recognized the principle of “step-by-step and simultaneous action” to achieve peace and denuclearization on the Korean Peninsula.

The summit statement provided no details on when North Korea would give up its nuclear weapons program or how the dismantling might be verified.

Sceptics of how much the meeting achieved pointed to the North Korean leadership’s long-held view that nuclear weapons are a bulwark against what it fears are U.S. plans to overthrow it and unite the Korean Peninsula.

However, South Korean President Moon Jae-in said the world, through the summit, had escaped the threat of war, echoing Trump’s upbeat assessment of his meeting with Kim.

“What’s most important was that the people of the world, including those in the United States, Japan and [the] Koreans, have all been able to escape the threat of war, nuclear weapons and missiles,” Moon told Pompeo.

Secretary Pompeo insisted that North Korea was committed to giving up its nuclear arsenal but said it would “be a process, not an easy one.”

Kim understood that getting rid of his nuclear arsenal needed to be done quickly and there would only be relief from stringent U.N. sanctions on North Korea after its “complete denuclearization,” Pompeo said.

Moon later said South Korea would be flexible when it comes to military pressure on North Korea if it is sincere about denuclearization.

Also on Thursday North and South Korea held their first military talks in more than a decade. The talks continued from an inter-Korean summit in April at which Moon and Kim agreed to defuse tension and cease “hostile acts.”

Speaking later in the day in Beijing, Pompeo said China, Japan and South Korea all acknowledged a corner had been turned on the Korean Peninsula issue, but that all three had also acknowledged sanctions remain in place until denuclearization is complete.

“China has reaffirmed its commitment to honoring the U.N. Security Council resolutions. Those have mechanisms for relief contained in them, and we agreed that at the appropriate time that those would be considered,” Pompeo said, standing next to the Chinese government’s top diplomat, State Councillor Wang Yi.

Wang said China had consistently supported the denuclearization of the Korean Peninsula but that it was impossible to solve the issue overnight.

“At the same time, we believe North Koreas’s reasonable security concerns should be resolved.”

The United States has long insisted on complete, verifiable and irreversible denuclearization by North Korea.

But the summit statement reference to North Korea committing to work towards the complete denuclearization of the peninsula has used been by North Korea in the past to include a U.S. nuclear umbrella in the region, and echoes promises it has failed to keep.

“They made real commitments to denuclearize. Each of them. And President Trump made a commitment that he would provide security assurances that were commensurate with that,” Pompeo said in Beijing.

“Those are firm commitments that the two leaders made and an understanding of the program is a piece of what will ultimately lead to our capacity to verify that full and complete denuclearization has actually taken place.”

President Trump returned to the United States on Wednesday and took to Twitter to hail the meeting, the first between a sitting U.S. president and a North Korean leader, as a major win for American security.

“Everybody can now feel much safer than the day I took office,” Trump tweeted. “There is no longer a nuclear threat from North Korea.”

Democratic critics in the United States said the agreement was short on detail and the president had made too many concessions to Kim, whose country is under U.N. sanctions for its nuclear and weapons programs and is widely condemned for human rights abuses.

Pompeo said Trump’s comments about the reduced threat from North Korea were made “with eyes wide open.”

Japan has reacted to Trump’s plan to cancel military exercises with South Korea with concern, saying the drills are vital for East Asian security.

Two North Korean missiles flew over Japan last year as North Korea made rapid advances in developing a missile capable of striking the U.S. mainland with a nuclear warhead.

Tokyo is working on arranging a meeting between Prime Minister Shinzo Abe and Kim, with one possibility being an Abe visit to Pyongyang around August, the Yomiuri newspaper reported.

A Japanese government source familiar with the matter told Reuters that officials aimed to discuss a summit with North Korean officials at a regional security conference in Mongolia on Thursday and Friday.

“The issue of South Korea-U.S. joint exercises is one that should be discussed,” Kang said. “But the issues of the alliance should be dealt with under the premise[that] we maintain a joint ironclad defense posture.”

The U.S. intelligence assessment of the nuclear and other military threat posed by North Korea to U.S. and allied forces remained unchanged despite Trump’s and Moon’s assertions about the North Korean nuclear threat being over, a senior U.S. official responsible for studying the North Korean military said.

“Make no mistake, we are going to maintain the readiness of our forces in South Korea,” said one U.S. official, speaking on condition of anonymity. The official acknowledged, however, it was still not certain how that was going to happen.

The United States maintains about 28,500 soldiers in South Korea, which remains in a technical state of war with the North after the 1950-53 Korean War ended in a truce rather than a peace treaty.