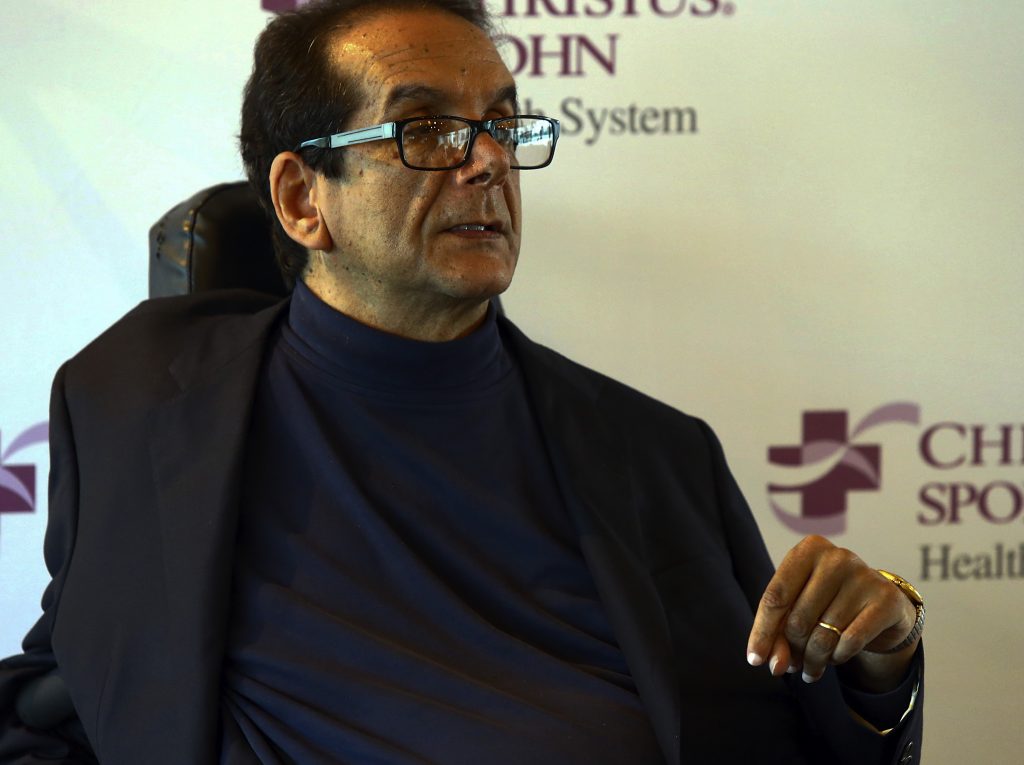 Charles Krauthammer, the Pulitzer Prize-winning columnist and noted commentator, said on Friday that he is continuing to battle cancer and that his doctors have given him a short time to live.

Krauthammer, 68, has been dealing with the illness for months, leading to the suspension of his widely syndicated Washington Post column and appearances on the Fox News Channel for much of the past year.

In a statement published by The Post, Krauthammer said he appeared to have recovered from an operation to remove a cancerous tumor last August, and was cancer-free as recently as a month ago.

“However, recent tests have revealed that the cancer has returned [and is] aggressive and rapidly spreading. My doctors tell me their best estimate is that I have only a few weeks left to live. This is the final verdict. My fight is over,” he wrote.

Krauthammer has been a leading conservative voice for decades. In addition to his Fox appearances and his Post column, which is published by some 400 newspapers, he was a weekly panelist on “Inside Washington” from 1990 until the program ended in 2013, and a contributing editor to the Weekly Standard.

He won the Pulitzer for commentary for his Post columns in 1987, just a few years after he made the unusual transition from being a practicing psychiatrist to writing columns.

“This is a hugely sad day for me, and I know in that I’m no different than so many Post readers,” said Fred Hiatt, The Post‘s editorial page editor. “For decades Charles has written a column of unparalleled principle and integrity, not to mention humor and intellectual virtuosity. There will be no replacing him.”

In a brief tribute to Krauthammer written on behalf of The Post‘s editorial board, Hiatt wrote on Friday, “We know we speak for many of you when we say that nothing and no one can replace him. Charles wrote for the right reasons. [As many] know – and presidents, from right to left, can attest – he didn’t seek invitations to White House dinners or other badges of approval from the powerful. He sought, rather, to provoke us to think, to enlarge our understanding, at times to make us laugh.”

Rupert Murdoch, executive chairman of Fox News, hailed Krauthammer in a statement as “a guiding star in an often turbulent world, a world that has too many superficial thinkers vulnerable to the ebb and flow of fashion, and a world that, unfortunately, has only one Charles Krauthammer.”

Krauthammer was permanently paralyzed in a diving accident while he was a first-year student at Harvard Medical School. After a lengthy recovery, he graduated and went on to a medical career.

He turned to opinion writing in 1980, contributing first to the New Republic, which he joined as a writer and editor in 1981. He also served as a speech writer to Vice President Walter Mondale in 1980.

He wrote essays for Time magazine starting in 1983. His Post column began in 1985.

His many honors included a national magazine award for his New Republic essays. The Financial Times called him the most influential commentator in America in 2006.

Although his columns touched on many topics, Krauthammer was best known, and perhaps most influential, for his comments about foreign policy. He popularized the term “Reagan Doctrine” to describe President Ronald Reagan’s support of anti-communist movements in Africa, Asia and Latin America to counter the Soviet Union and end the Cold War.

He was a strong supporter of Israel and was a leading advocate for the invasion of Iraq in 2002 and 2003, writing on the eve of the U.S. military’s action that “it may yet fail. But we cannot afford not to try. There is not a single, remotely plausible, alternative strategy for attacking the monster behind 9/11. It’s not Osama bin Laden; it is the cauldron of political oppression, religious intolerance, and social ruin in the Arab-Islamic world – oppression transmuted and deflected by regimes with no legitimacy into virulent, murderous anti-Americanism.”

He also predicted that Iraq would recover quickly after the invasion. “With its oil, its urbanized middle class, its educated population, its essential modernity, Iraq has a future. … Once its political and industrial infrastructures are reestablished, Iraq’s potential for rebound, indeed for explosive growth, is unlimited.”

In his statement on Friday, Krauthammer thanked his doctors, caregivers and colleagues as well as his readers and viewers.

“I believe that the pursuit of truth and right ideas through honest debate and rigorous argument is a noble undertaking,” he wrote. “I’m grateful to have played a small role in the conversations that have helped guide this extraordinary nation’s destiny.”

He added, “I [have] no regrets. It was a wonderful life – full and complete with the great loves and great endeavors that make it worth living. I am sad to leave, but I leave with the knowledge that I lived the life I intended.”