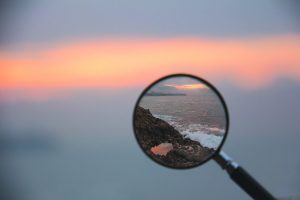 One of the most challenging aspects of writing articles is the general lack of instantaneous feedback. Unlike public speaking — or even a one-on-one conversation — a writer does not have any immediate way to know whether the recipients of his message agree or disagree, or whether they find it mesmerizing or totally boring. On the flip side, it also means that writers generally never know if a reader fell sound asleep at the beginning of the third paragraph, or got so frustrated by what was written that he ripped out the page and hurled the article directly into the wastebasket.

(A friend of mine shared with me about the time he substituted for an evening Gemara shiur in a local shul. Midway through, all three attendees dozed off.

“I was talking to myself,” my friend told me. “But knowing it was my delivery that helped them fall asleep, I was afraid to stop lest I wake them up…” That notion, that we may have helped someone get a good nap or a good night’s sleep, is somewhat of a consoling thought for a writer as well.)

Like most people, while we usually do prefer positive letters and calls over critical ones — though the latter are also appreciated because they indicate that someone read what we labored to write — we doubtless learn more from constructive criticism. This is especially true when the advice comes from someone we trust and admire.

I was somewhat surprised when I received a message from an individual — a noted askan and baal chessed whom I am privileged to call a close friend — that he wanted to discuss with me an article I had recently written in these pages titled “Facing Facts” (Features, 24 Iyar/May 9.) The subject of the Op-Ed was the misuse of technology, and I knew that on this topic we are very much on the same page.

It turned out that his issue was not with anything I wrote, but rather with what he feels I generally don’t write. He pointed out that I concluded that article with a poignant story of a car service driver whose filter didn’t allow him to download or view clips on his Smartphone.

“There is no doubt that this driver, who according to your description did not seem to be part of our community, deserves the praise you heaped on him,” my friend told me. “And it is important to tell such stories of Kiddush Hashem about people outside our community. But such tales of heroism also exist within our community.

“Why do you — and other writers — focus so much on all that is right in other parts of the Jewish world, and by inference, if not directly, focus on all that is wrong in our own community?”

His point is a valid one.

It isn’t merely a matter of trying to set the record straight by helping the outside world see the beauty of our community. Focusing more on the good we do will help all of us grow as well.

My Rebbi, Harav Nesanel Quinn, zt”l, told of the time his Rebbi, Harav Shraga Feivel Mendlowitz, zt”l, the legendary founder of Mesivta Torah Vodaas, was dancing with great fervor with his talmidim one Shavuos afternoon when he noticed a talmid — who lived in Lower Manhattan and had crossed the Williamsburg Bridge on foot to spend the afternoon in his beloved yeshivah — sitting and learning.

Rav Mendlowitz, who instilled in his talmidim an enormous level of hasmadah, nevertheless encouraged him to join the dancing.

One does not have to work very hard to find these acts of greatness. Our community is blessed with many unassuming heroes who do selfless acts of kindness on a daily basis.

A classic example is one that my family experienced only last week.

My thirteen-year-old son is enrolled in a well mapped out program called Kovetz-al-Yad, in which bachurim review the Masechtos they have learned in past years on a nightly basis after regular yeshivah hours. The key to the program is the monthly luach — essentially a pocket-sized, folded piece of thick paper, which helps each participant keep track of precisely where he is holding.

One day last week, as I entered the shul near my house, the gabbai rushed over to me, saying that someone had given him something for my son, and I should make sure to get it from him before I went home. Since my minyan was about to start, I assured him that I would do so after davening.

Halfway through Shacharis, the gabbai (who davens with a different minyan) approached me and wordlessly placed a Kovetz-al-Yad with my son’s name on it in my hands. Since I was unable to speak, I couldn’t ask him for any details.

Early the next morning, after my son immersed in the mikveh located in this shul, he discovered a hand-written note — written on a tissue — in his tefillin bag.

“I found your luach,” it said. “I gave it to the gabbai, to give it to your father. If you didn’t receive it yet, here is the telephone number of the gabbai…..”

The gabbai later told me that the hero of the story was a melamed in the local Satmar cheder. I can only imagine how precious every moment is for him in the early morning. Yet he not only made the effort to find out whose son had lost the luach and impress upon the gabbai the importance of making sure I get it, but even took the extra step of writing my son a note — all to make sure that this little piece of paper that helps a young bachur review got back to him.