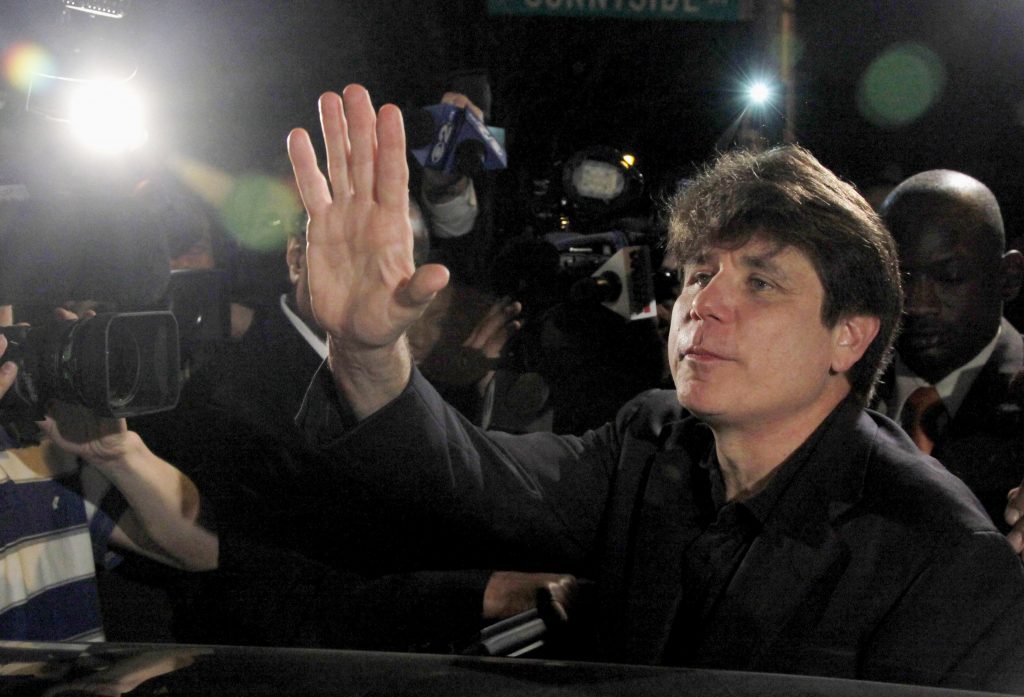 President Donald Trump said Thursday that he’s considering commuting the sentence of former Illinois Gov. Rod Blagojevich, who was convicted of corruption, and pardoning lifestyle maven Martha Stewart, who did a stint in federal prison after she was convicted of charges related to a stock sale.

As he left Washington to fly to Texas, Trump tweeted: “Will be giving a Full Pardon to Dinesh D’Souza today. He was treated very unfairly by our government!” D’Souza, an outspoken critic of former President Barack Obama, had claimed that his prosecution by the Obama Justice Department was politically motivated, but the presiding federal judge said D’Souza had failed to prove it.

Trump later shared with reporters aboard Air Force One his thoughts on Blagojevich and Stewart.

Blagojevich, the Democratic former governor, began serving a 14-year prison sentence on corruption convictions in 2012. His scheduled release date is 2024.

Stewart was convicted in 2004 of obstructing justice and lying to the government about why she unloaded stock just before the price plummeted. She served five months in prison.

Trump also told reporters accompanying him to Texas that no one asked him to pardon D’Souza, whose case had become a cause in conservative circles.

Trump said he only knew D’Souza from reading his works. He said he telephoned D’Souza on Wednesday night.

The filmmaker, author and speaker was sentenced in September 2014 in federal court in New York to five years of probation after he admitted making illegal contributions to a U.S. Senate candidate in New York. Eight months of the first year was to be served in a community confinement center.

D’Souza was also sentenced to an eight-hour day of community service every week of the five-year term, weekly counseling, and was ordered to pay a $30,000 fine along with a $100 special assessment.

“Dinesh D’Souza is an individual who, you know, has made restitution and accepted responsibility for his actions. But these are infractions and crimes that are rarely prosecuted, and many believe that he was the subject of some selective prosecution from the previous administration,” Shah said on Fox News Channel.

“Nonetheless, he’s accepted responsibility and the president thinks it’s appropriate that he receive a pardon after community service, paying a fine and doing other things that the judge has required,” Shah said.

D’Souza acknowledged that he had two close associates each contribute $10,000 to the Senate campaign of Republican Wendy Long with the understanding that he would reimburse them. Individual contributions to any one candidate were limited to $5,000 at the time. Long lost to Democratic Sen. Kirsten Gillibrand.

D’Souza, who made the documentary “2016: Obama’s America,” entered the plea a week after the federal judge overseeing the case rejected his claim that he was selectively prosecuted. The judge said D’Souza had shown the court no evidence that he was targeted.

The government said in court papers that D’Souza faced overwhelming evidence of guilt and “now seizes upon the fact that he is an outspoken critic of the Obama administration as an excuse to avoid the consequences of his actions.”

D’Souza is a former policy analyst under President Ronald Reagan and a prolific author well-known for works critical of Obama.

He retweeted Trump’s tweet about the forthcoming pardon but did not immediately respond to an emailed request for comment sent to his media company, D’Souza Media.

In February, D’Souza apologized for sending a tweet that made fun of students from a high school in Parkland, Florida, who were upset after the Florida House voted down a proposed ban on a type of semi-automatic rifles known as assault weapons. The students had lost 17 classmates and teachers in a shooting that month.

D’Souza said in one of the tweets that it was the “worst news since their parents told them to get summer jobs.” In another tweet, he wrote “Adults 1, kids 0.”

His tweets about the Parkland students have been sharply criticized by some Florida Republicans, including Gov. Rick Scott. Despite the backlash, D’Souza is scheduled to speak at a two-day event being put on next month by the Republican Party of Florida. Scott, who is running for U.S. Senate, has not yet decided whether he will attend.