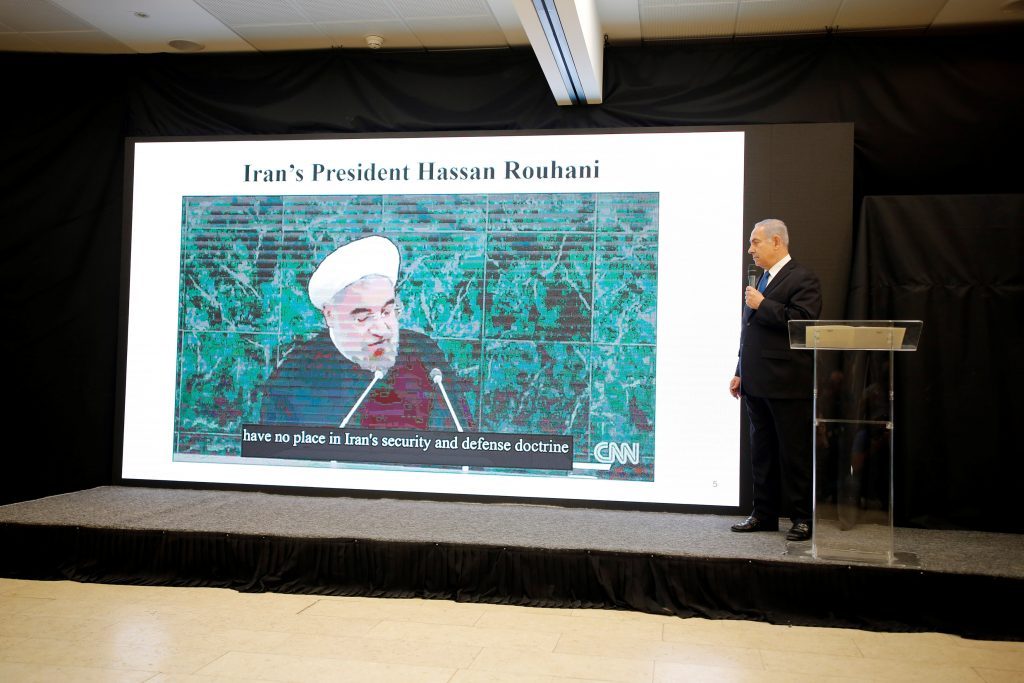 Did you hear about Israeli Prime Minister Netanyahu’s revelation that Iran is cheating on the deal it made in 2015 with six major world powers?

Well, if you did, you misheard. Or were misled.

Several news organizations seemed to make that erroneous claim, and the situation wasn’t helped by a White House communiqué contending that the news from Israel exposed the fact that “Iran has a robust, clandestine nuclear weapons program.”

The statement’s “clerical error,” in the words of White House spokesperson Sarah Huckabee Sanders, was later amended, with “has” changed to “had.” How tragically droll had World War III resulted from a single letter typo.

What Mr. Netanyahu in fact revealed was a large cache of documents (55,000 pages, and 183 compact discs) that, he explained, had been obtained and spirited out of Iran by the Mossad (that grinding sound you’ve been hearing is the manic gnashing of mullahs’ teeth). The voluminous material, as described by the Israeli leader, revealed some previously unknown former Iranian nuclear sites, and showed that Iran, despite its insistence to the contrary at the time the Joint Comprehensive Plan of Action was enacted, had indeed earlier pursued the manufacture of nuclear weapons.

That revelation is less than shocking. Nobody, including in the Obama administration, believed that Iran hadn’t aspired to nuclear weaponhood. The Shiite government was known to have had a program, “Project Amad,” with that specific aim, which continued until 2003.

Four years before the nuclear deal was signed, an International Atomic Energy Agency report explicitly noted the existence of Project Amad. And, shortly before the deal, even then-Secretary of State John Kerry, one of its architects, nodded to Iran’s bald lie about its past activities, politely explaining that “we are not fixated on Iran specifically accounting for what they did at one point in time or another.”

In fact, it was precisely the recognition of Iran’s nuclear aspirations that propelled the powers to push for a deal, in order to put brakes on the mullahs’ objective. As British Foreign Secretary Boris Johnson noted last week, “The Iran nuclear deal is not based on trust about Iran’s intentions; rather it is based on tough verification.”

President Trump campaigned on a promise to renegotiate that “worst deal ever” (an appellation it apparently shares with NAFTA — they must have tied for first place), and had originally assigned a May 12 deadline (which he then rolled back to May 8) for the deal to be renegotiated to address Iran’s ballistic missile program, expand the terms by which inspectors visit suspect Iranian sites, and remove or change the “sunset” clauses under which some of its terms expire. Or be scrapped altogether.

Some observers have speculated that Mr. Netanyahu’s dramatic unveiling (quite literally; he pulled a curtain off exhibits) of the material taken from Iran and demonstrating the country’s deceitfulness was intended to prepare the way for Mr. Trump’s pulling the U.S. out of the deal.

But the revelation might also have been aimed more poignantly at the Iranians themselves, to put them on uncomfortable notice that not only is what everyone knew but couldn’t prove in 2015 now proven, but also to apprise them that Israel has the means to infiltrate secure locations within Iran (even within Tehran, where the documents had been hidden) and help itself to what it likes.

Which discomfort might just help Mr. Trump succeed at tightening, rather than jettisoning, the deal. If Iran is sufficiently nervous about what might happen next within its own borders, it might just be a bit less resistant to “persuasion.”

What’s more, the president’s bravado — or, in his critics’ eyes, volatility — arguably helped intimidate North Korea, even though the outcome of that country’s inscrutable leader’s overture to his southern neighbor remains to be seen. Might Mr. Trump’s swagger (which his new Secretary of State Mike Pompeo has declared is returning to American foreign policy) convince Iran to better … understand things?

At present, President Emmanuel Macron of France, Chancellor Angela Merkel of Germany and Prime Minister Theresa May of Britain have lobbied Mr. Trump to not reopen the deal. And Iran has declared that the agreement cannot be amended, period. But its mullahcracy certainly appreciates the deal’s lifting of some economic sanctions and, with the current pressure on their country, might conceivably accept tightened terms if some means can be devised to allow it to save face.

Neither reasonability nor flexibility, though, are among the current Iranian government’s strong points, and even if a typo, thankfully, didn’t result in war, pushing the mullahs too far could. Let’s hope —and be mispallel — that it won’t.