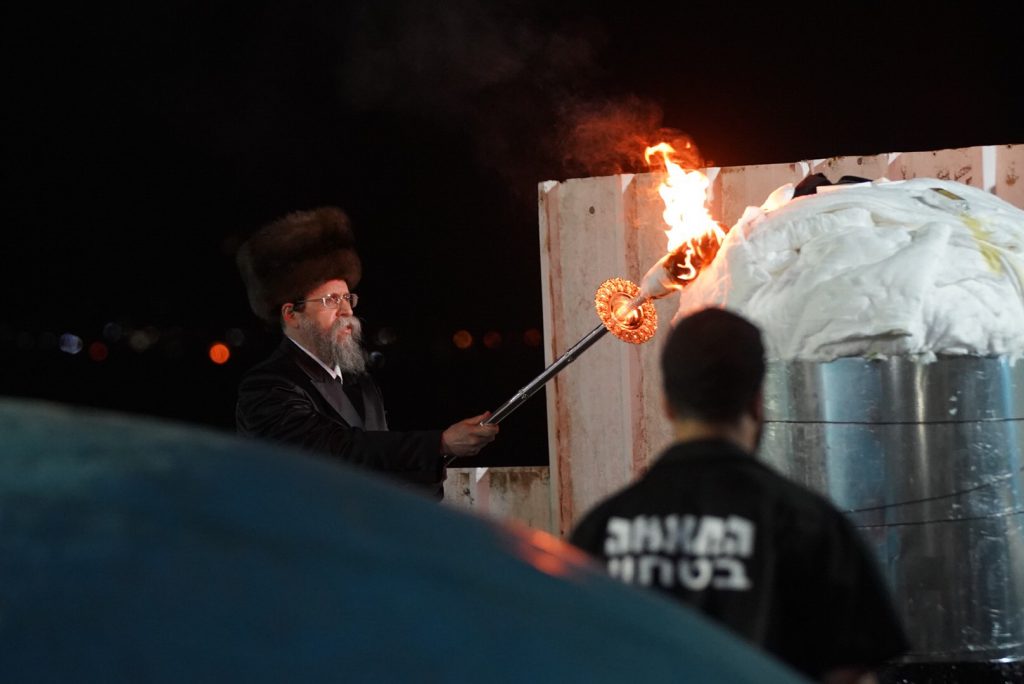 Despite mounting regional tensions and the threat of war, despite a heat wave and high winds threatening wildfires — despite everything, Lag BaOmer at Meron proceeded as it does every year, with a joy and serenity that transcended all the troubles of the world.

At 8 p.m. Israel time Wednesday night, the great crowd davened Ma’ariv, followed by Sefiras HaOmer in a minyan too vast to really count, and recitation of Tehillim too heartfelt to be ignored in shamayim; and then the Boyaner Rebbe, in the holy tradition of his fathers, lit the main bonfire at the kever of Rabbi Shimon bar Yochai.

Then the singing and dancing began, and Dovid Weinkrantz was found in the same place as he always is: in a group of musicians on a stage in the courtyard of the site, situated between the men’s and women’s section.

For 43 years, since 1975, he has been there with his accordion (the only one in the group, he notes), along with about 10 others. Not just anyone can play there, though. As he said, they only allow musicians who they know to be true yirei shamayim to join them on the bimah. Only the purest music will do in such a pure moment.

But besides that, he said in an interview with Hamodia just after his arrival at Meron on Wednesday afternoon — all are welcome.

“By Rabbi Shimon, there are no political parties, no sectors, no divisions, it doesn’t matter Ashkenazi, Sephardi, Chassidish, Litvish. All can rejoice with Rabbi Shimon.”

“A person comes to Meron with a face like Tisha B’Av, full of sorrow and worry, and he leaves with the face of Simchas Torah, full of faith and joy.”

Like Yidden say that the many rocks on the roadside on the approach to Meron are the heavy stones, the troubles that weigh on the hearts of Yidden, and are lifted off when they leave the holy site.

Nine years ago, Reb Dovid carried his own heavy burden — two growths inside him. The morning on which the surgery to remove them was scheduled, he attended a bris milah.

He is not a young man anymore, but the schedule he maintains on Lag BaOmer would exhaust someone half his age. From the hadlakah until 1:30 a.m., he plays with the band at the chatzer of the kever. But his night is not over. From there he goes to the nearby kever of Rabbi Yochanan HaSandler, also a talmid of Rabbi Akiva, where music and dancing is quieter, more subdued; until 5 a.m., when all is quiet for Vasikin. From about 7 until noon he sleeps, in order to gain strength for the next musical session, until it’s all over at about 10 p.m. Thursday.

He and his fellow musicians, all accomplished klezmerim, receive no payment for their superlative efforts. Indeed, it costs them money, as they pay their own way there and back.

But it doesn’t matter. They do it out of love. Love for Hashem and the Jewish people.

Not that they aren’t rewarded. “It recharges my battery for the whole rest of the year,” he says.

When asked how Meron came to be such an important part of his life, he explained that it goes back to Cracow two generations ago. His mother’s father would go to the kever of the Rema, Rav Moshe Isserles, every Lag BaOmer, because that also happened to be the yartzheit of the Rema. So, he grew up hearing about Lag BaOmer from his mother.

Reb Dovid grew up in Eretz Yisrael; and at age 11 he went to Meron for the first time.

Later, as a student at Bar Ilan University, he was invited by a friend to travel to Meron with him to play music there on the 7th of Adar, Moshe Rabbeinu’s yartzheit. He agreed, and agreed to go again on Lag BaOmer. That was 1975, and he’s gone every year since.

“The greatest pleasure of all, though, is when adults in their 20s, 30s, 40s, come up to me at Meron and say, ‘I remember when I saw you playing here when I was a little boy.”

Reb Dovid Klein from Tzfas, originally from Baltimore, has been going to the Lag BaOmer celebration at Meron every year for the last 35 years.

As he geared up on Wednesday afternoon for this year’s trip, he shared what he termed “a thought journey” with us:

“Lag BaOmer at Meron has been one of the things that most influenced me in my Yiddishkeit. It had a big effect on me,” he said.

“Every time, it’s the same incredible sight, an impossible, huge crowd … Sometimes there are so many people — hundreds of thousands — that they overflow the roads and not a vehicle can get through.

“Who are these people? They are holy people, all of them, who have traveled, from all over the country and all over the world, just to honor one person: Rabbi Shimon bar Yochai.

“And how did he deserve such kavod, such honor?

“First of all, he was a talmid of the great Rabbi Akiva and a great sage in his own right. Second, he wasn’t scared of the Romans; he kept on teaching Torah despite the threat of a death penalty. When the Romans came for him, he fled to a cave where he and his son Rabbi Elazar learned Torah for 13 years without stopping for minute. But he never rested on his laurels. He kept on serving Hashem and teaching Torah to the very end. The Zohar says that when he gave up his neshamah, it came at the end of a shiur he was giving, and the last word he uttered in this world was from a passuk — divrei Torah.

He admitted, though, that he missed two years: when he was in aveilus for his father z”l, and the year his wife gave birth to their first child, just a few days before Lag BaOmer, and he was needed at home.

Those were the first two years of his marriage. The following year, when he told her that he planned to go to Meron on Lag BaOmer, she responded, “But you never go!”

“No, I always go! I just couldn’t go the last two years.” She didn’t know that he had been making the trip regularly for years before they married.

Yosef Aharon, an avreich who was born in Yerushalayim and grew up in Bnei Brak, told Hamodia that he brought his son with him to Meron this year as an afikoman present.

But, he said, he didn’t come only for his son; the experience is important to him as well. “Especially, the ruchniyus of the hadlakah [the lighting of the main bonfire at the kever of the holy Tanna Rabbi Shimon Bar Yochai], to watch the Boyaner Rebbe light the fire, it’s a great thing to see.”

“And then the singing and dancing. It’s like everyone is brought together as in a single body,” he said.

One bachur we approached for his reflections about the event said that he wasn’t going to Meron this year.

Why not? we asked.

“Because,” he said with a sheepish smile, “it’s just too intense.”

As usual, the logistics of the event were formidable. Over 600 volunteers arrived during the preceding days to set up emergency medical services for the largest gathering of people in Israel in any one spot annually. As of Wednesday evening, United Hatzalah volunteer EMS first responders reportedly treated some 56 people in the Meron area for minor contusions, snake and scorpion bites, fainting, cuts, and other minor complaints.

Food and drink was provided in abundance for all the visitors at no charge, a chessed which has become part and parcel of the celebrations at Meron.

Hundreds of police were deployed to keep order. Police said they were using various technological means, “including a hovercraft, a wide array of cameras and a police helicopter are being used to receive aerial pictures of the events in the sector,” according to a statement.

And this year, concerns about fire hazards were pronounced. Several municipalities from Haifa to Bnei Brak and elsewhere announced that they were banning or restricting bonfires due to weather conditions which elevated the risk of fires spreading from the bonfires.

Sephardi Chief Rabbi of Israel Yitzchak Yosef issued a statement calling for the public to exercise extreme caution in lighting Lag Ba’omer bonfires. “According to Jewish law, despite the importance of the day, it is obligatory to obey the safety instructions of the professional bodies and to light the fires in each and every town according only to their directions,” he wrote.

Prime Minister Binyamin Netanyahu joined the chorus of caution as well, and promised, “There will be other chances.”