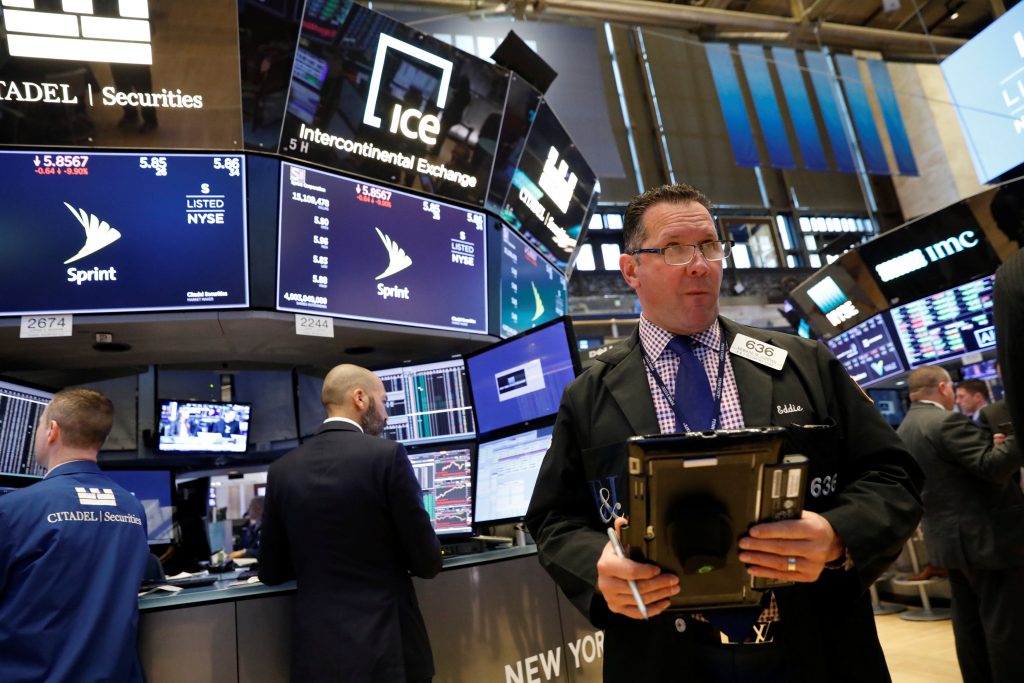 U.S. stock indexes were lower in mid-afternoon trading on Monday after an early burst of buying faded away.

The S&P 500 jumped at the open of trading following a series of buyout deals and strong earnings reports. But the index sagged as noon approached, weighed down by losses for telecom stocks and other areas of the market.

PUT ON HOLD: Telecom stocks in the S&P 500 fell nearly 2 percent for the largest loss among the 11 sectors that make up the index.

Sprint and T-Mobile US were at the center of investors’ attention, though neither is in the S&P 500. The pair announced a $26.5 billion deal to merge following years of consideration for a combination. But investors are unsure whether this attempt will get the necessary approvals from U.S. regulators.

GOBBLED UP: McDonald’s jumped 5 percent to $166.73 after it reported healthier profit and revenue than analysts expected for the first three months of the year. Sales at its restaurants open more than a year were much stronger than Wall Street had forecast.

EARNING THEIR KEEP: McDonald’s joined the wave of companies to report not only big earnings growth for the first quarter, but bigger than analysts expected. Just over half the companies in the S&P 500 have reported their earnings for the first three months of the year, and they’re on pace to deliver overall growth of 23 percent, according to FactSet. That would be the strongest showing since the summer of 2010.

“It’s been phenomenal,” said Phil Orlando, chief equity market strategist at Federated Investors. “Corporate earnings are doing better. Economic growth is doing better, and I think the market is begrudgingly allowing those numbers to work their way into share prices.”

The S&P 500 has been whipping higher and lower in recent months, hurt by worries about higher interest rates and the possibility of a trade war. But the index is up 3.2 percent since setting a low in early April and is on pace to close out its first winning month in the last three.

REFINED GAINS: Andeavor jumped to the biggest gain in the S&P 500 after Marathon Petroleum said it will buy the refiner and pipeline owner for more than $23 billion. Andeavor, which used to be called Tesoro, soared 13 percent to $138.32

DISTRIBUTED GAINS: DCT Industrial Trust, a logistics real-estate company, gained 11 percent to $65.32 after Prologis, an owner of distribution centers and other logistics real estate, agreed on Sunday to buy it in an all-stock deal.

DCT shareholders will receive 1.02 Prologis shares for each share they own. With nearly 94 million shares outstanding, that values DCT at $6.38 billion, according to Friday’s closing prices.

BUSY WEEK AHEAD: Besides being the heart of earnings reporting season for companies, this week will also feature a policy meeting for the Federal Reserve on interest rates. The Fed will announce its decision on Wednesday.

On Friday, the government releases its jobs report, which is usually the most anticipated economic report of each month.