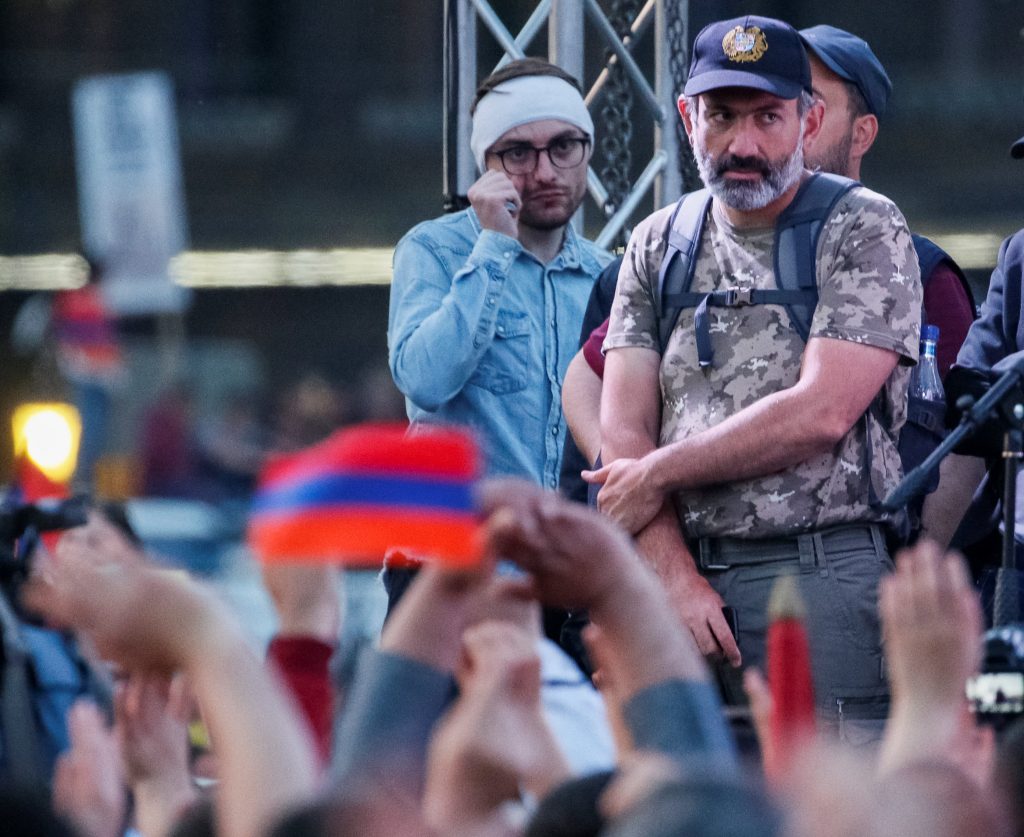 Russia, which for more than a week has been an ever-present factor in the background as Armenian protesters thronged to the streets, is starting to define its role here.

Moscow has watched as the peaceful revolt to its south unfolded, first with professed disinterest, then caution, and now perhaps with careful engagement.

Early Thursday, two Armenian officials, including its foreign minister, jetted to Moscow for a series of meetings with Russian officials, Interfax reported. “The internal political crisis in Armenia and Russian-Armenian allied relations will dominate the agenda,” the news agency cited a source as saying.

Their visit comes a day after Armenia’s charismatic opposition leader, Nikol Pashinyan, who is jostling to become prime minister in a fresh parliamentary vote on May 1, told huge crowds of demonstrators that during a meeting at the Russian Embassy he “got reassurance that Russia would not intervene in Armenia’s internal affairs.”

Pashinyan’s pro-democracy anti-government protests have been drawing crowds of over 100,000 people to the grand, salmon-colored central square of Yerevan, a level of mobilization this nation of 2.9 million has not seen in decades. For exactly two weeks on Thursday, the Armenian capital has been filled with boisterous street parties, the air imbued with contagious excitement.

But unlike the so-called “color revolutions” in Georgia and Ukraine, which were spurred by street demonstrations and which Russia vehemently opposed, the uprising here has been met with a much more measured response.

The protests have not been overtly anti-Russian in nature, but Moscow’s presence and significant clout in the tiny, impoverished country are undeniable. Ousted premier Serzh Sargsyan was overtly pro-Russian in his policies; he was replaced with former Gazprom Executive Karen Karapetyan, whose substantial work at the Russian energy giant has earned him the moniker “Karen of gas” in Armenian.

The protest movement characterized both as being corrupt members of a ruling elite and woefully out of touch with their people. But for Pashinyan’s uprising to survive, and to complete the toppling of the ruling government, Russia cannot be ignored. Russian President Vladimir Putin made this clear Thursday, when he stressed in a phone call to Karapetyan that next week’s election — which Pashinyan is expected to win — must be carried out in a legal manner.

“If we assume we’re in the final act of the play, we may be surprised,” said Noubar Afeyan, a U.S.-based philanthropist of Armenian descent on a visit to Yerevan. Referring to Russia, the Chief Executive of life-science firm Flagship Pioneering continued, “If we are actually in the first act of the play, then we should look forward to the main characters showing up at some point.”

Armenia is also a member of a Russian economic trade bloc and a Russian military alliance. But a year ago, when Armenia signed a far-reaching landmark agreement with the European Union, Moscow appeared to give its blessing, saying it respected Armenian sovereignty.

Pashinyan would need to continue this balance. He has “sought to reassure all parties, including Russia, that there should be no dramatic shift or U-turn in foreign policy,” said Richard Giragosian, director of the Regional Studies Center in Yerevan, an independent think tank.

Armenia’s peaceful, bloodless revolution has already become a unique case in the trajectory of former Soviet countries. “This was a rare success, or rare victory, of a nonviolent change of government, where the incumbent — after a decade in power — not only willingly, but easily stepped down,” Giragosian said. And while previous, pro-democracy revolutions in Ukraine, Georgia and Kyrgyzstan ultimately faltered, mostly due to Moscow’s intervention, Armenia — which has made clear that its relationship with Russia should not change — could prove the exception.