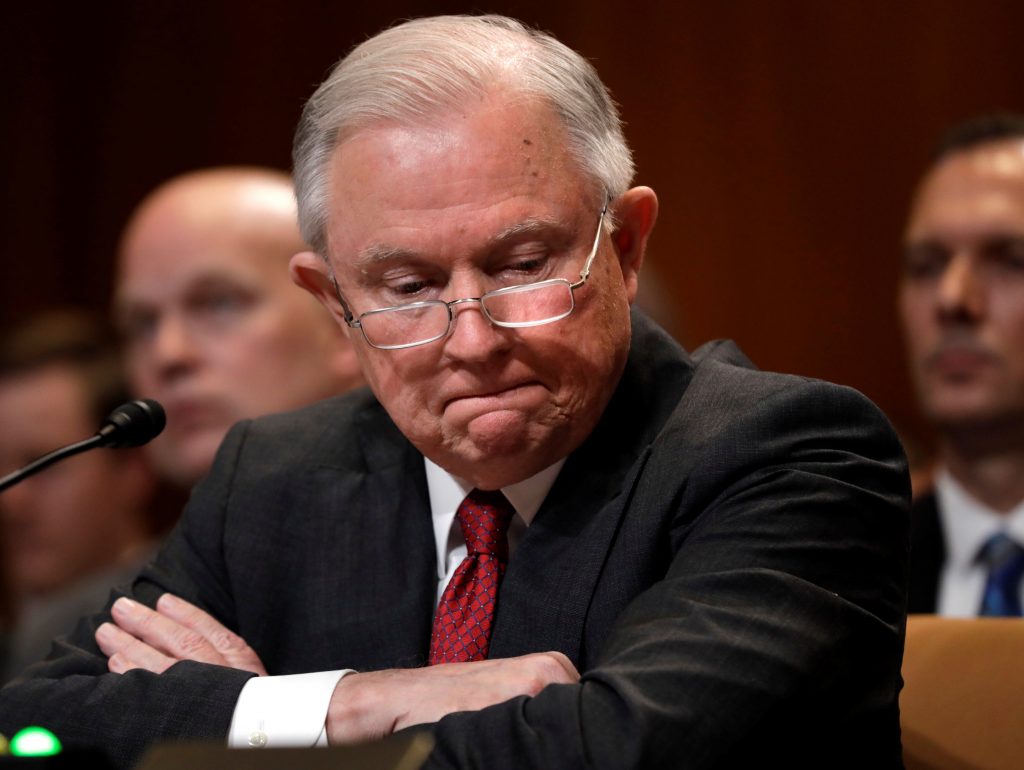 Questions about President Donald Trump and the investigation into whether his 2016 election campaign colluded with Russia overshadowed a Senate hearing on Wednesday with U.S. Attorney General Jeff Sessions, who has been a frequent target of Trump’s public attacks.

Sessions was the sole witness at the hearing on the Justice Department’s proposed 2019 budget, where Democrats repeatedly drew the spotlight to the Russia probe.

In ways that could keep Trump’s fury in check, Sessions delicately navigated questions on recusals, pardons and even the possible firing of the special counsel assigned to the Russia investigation or of the deputy attorney general.

Sessions would not say if he had recused himself, or would, from an ongoing criminal investigation into Trump’s personal attorney Michael Cohen, nor whether he would consider resigning in protest should Trump decide to fire Special Counsel Robert Mueller or Deputy Attorney General Rod Rosenstein, who oversees the Russia probe.

Trump has frequently railed against Sessions, saying he regretted tapping him as the country’s top lawyer because of Sessions’ decision to recuse himself from the Russia investigation.

The hearing touched on almost every budget line for the Justice Department, including fighting drug trafficking and changes in immigration policy, putting Sessions on the front line of representing and occasionally defending the Trump administration.

Trump has also openly targeted other top Justice Department officials, including Mueller, saying his Russia investigation is a “witch hunt.”

“That calls for a speculative answer,” Sessions told Senator Patrick Leahy, a Democrat, when asked if he would resign if either Rosenstein and Mueller were fired. “I am not able to do that.”

When asked later for his legal opinion about the open question of whether Trump has the power to dismiss Mueller, Sessions said he was recused from answering.

Most recently, Trump bashed Mueller and the Justice Department after the FBI raided Cohen’s home and office.

The president’s unorthodox attacks on the Justice Department have raised concerns by some critics about threats to the independence of the department’s investigations.

“I have been here 44 years. I have never seen such attacks,” Leahy said.

Leahy pressed Sessions on whether he had recused himself on the Cohen probe.

Sessions declined to discuss any possible recusals, because that could lead to confirming or denying an investigation or inadvertently sharing details about the probe. The Justice Department has strict prohibitions against publicly confirming investigations.

But at the same time he said, “I have sought advice on those matters. I have not met with the top ethics person on it, but I can assure you I have not violated my recusal.”