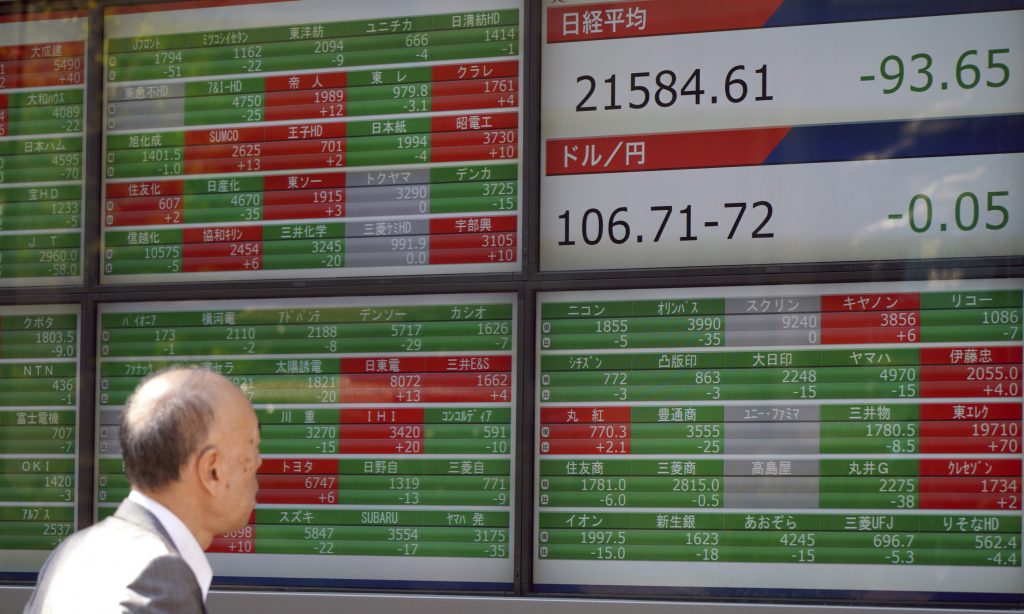 Spreadbetters pointed to a firm start for European shares, with FTSE futures up 0.3 percent but E-Minis for S&P 500 were a tad softer as were Dow futures.

In Asia, Apple led the way after Taiwan Semiconductor Manufacturing (TSMC) cut its revenue target to the low end of forecasts and blamed softer demand for smartphones.

“The big story for the APAC region today will be fallout from TSMC’s miss, which will weigh heavily on the tech sector, with first order impacts on the Semis and Samsung Electronics/ Galaxy supply chain,” analysts at JPMorgan said in a note.

“The miss appears largely to have been due to Apple iPhones, and so may also weigh on the Apple supply chain.”

Japan’s Nikkei eased 0.1 percent as the drop in tech outweighed the gains in energy and financials.

Wall Street had also been hit by weak results from tobacco company Philip Morris, which sent its shares down as much as 17.7 percent and dragged on the S&P 500.

Oil prices eased a bit after hitting their highest since late 2014 on drawdowns in global supply and as Saudi Arabia looks to fatten its export revenue.

A global oil glut has been virtually eliminated, according to a joint OPEC and non-OPEC technical panel, two sources familiar with the matter said, thanks in part to an OPEC-led supply cut deal in place since January 2017.

Analysts at CBA noted market measures of inflation expectations had spiked higher this week as oil prices surged, with some hitting highs not seen since mid-2014.

That in turn pressured fixed-income debt with yields on 10-year Treasuries jumping to a one-month top at 2.93 percent. They had last eased slightly to 2.91 percent.

Yields are up 10 basis points in just two days, the sharpest move since early February.

In currency markets, the main mover was sterling which dived late on Thursday when Bank of England Governor Mark Carney cooled expectations for an interest-rate hike in May, pointing out there were “other meetings” this year.

The sudden retreat in sterling helped support the U.S. dollar more broadly and the dollar index was steady at 89.986.

On the radar later in the day will be IMF and World Bank meetings in Washington where free trade and protectionism are certain to be high on the agenda along with Sino-U.S. tensions.