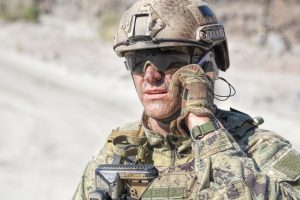 Imagine your smartphone’s camera, microphone and motion sensors were monitoring you for signs of illness. That’s the future envisioned by scientists at the Pentagon’s secretive weapons development arm, where such a system is being built to keep tabs on deployed U.S. service members.

The Defense Advanced Research Projects Agency announced Thursday that it has awarded a $5.1 million contract to the Fairfax, Virginia-based cybersecurity company Kryptowire to develop what DARPA calls the “Warfighter Analytics using Smartphones for Health” program, or WASH for short. The app would be used to spot diseases based on data that it collects from a person’s smartphone.

Tom Karygiannis, Kryptowire’s vice president of product, said he hopes the technology can one day broaden access to health care by spotting health problems before a person visits a doctor or nurse. “Ultimately, this could mean better treatment, cost savings and making treatment available to more people,” he said.

“If you’re activating a microphone on someone’s phone, that is going to raise a lot of alarms,” said Jay Stanley, a senior policy analyst with the American Civil Liberties Union. “People don’t want to feel like someone is listening in on their private life. That’s going to have to be subject to tight controls.”

For DARPA, the goal is to help the military deal with some of its biggest health-care problems while conserving resources. The WASH development program started last year and will continue through 2021, an agency spokesman said.

“The program aims to develop algorithms that use raw data from smartphone sensors to enable continuous and real-time assessment” of warfighters’ health status, identifying latent or developing conditions and diseases, DARPA communications chief Jared Adams said in an email.

According to a fact sheet published by the agency, the app will collect data from smartphone features including cameras, light sensors, pedometers, fingerprint sensors, microphones and other sources. With the knowledge and consent of the user, the information would be collected continuously and passively, meaning a soldier’s smartphone could be constantly scanning for signs that something is wrong.

Company officials say one goal of the research is to find a way to keep that data secure and private – safe from hackers or inadvertent leaks.

The work evolved out of an earlier project at Kryptowire to replace password sign-ons with passive electronic monitoring.

Kryptowire’s primary business is a software tool that searches for vulnerabilities in mobile applications. The company works under contract with the Department of Homeland Security, the Justice Department and a grab bag of private corporations.

That work led to a technology designed to let people sign into their smartphones by identifying all the ways they interact with the device; how people walk, how they hold the phone and how often they use it all became a part of the “profile” that could detect whether the person using a phone is its true owner.

After learning how to build these profiles, product developers at Kryptowire realized they might also be able to detect when something is wrong.

“For example, if a user is inebriated we found they would interact with the device differently,” Karygiannis said. “So if you can do that, the question is, what else can you do?”

Now, with financial backing from DARPA, the company is reaching out to hospitals and medical research institutions to figure out how to use that information to detect illnesses.

Possible targets could include early detection of diseases such as Alzheimer’s and Parkinson’s or conditions such as post-traumatic stress disorder, company officials said.

Once the company’s medical research partners understand what the technology can do, Karygiannis said, “they’ll probably come up with other ideas that we haven’t.”

Executives at Kryptowire say the eventual goal is to move beyond the military to everyday smartphone users, though they acknowledge that the technology would need to make a big leap from the current fitness and other health apps on the market.

Still, there’s some precedent for what Kryptowire and DARPA are doing. Companies are pushing commercial smartphone apps that diabetics can use to track their blood sugar levels. Fitness apps such as Fitbit have become so popular that some employers are building rewards programs around them, paying their workers small bonuses for healthy behavior, for example.

Seeing DARPA put money down on such an untested idea suggests that private investors might take an interest in it, too. After all, there is a long history of DARPA-funded technologies eventually entering the civilian world; GPS and the internet (once called ARPAnet, after the agency’s predecessor) benefited from early funding from the agency.

Chris Shipley, managing partner of Ascent Line Partners, an innovation and market strategy consultancy, said the agency’s involvement could mean the technology will hit the commercial market much sooner than it otherwise would have.

“I think these are really early days,” Shipley said.

“The fact that this is being deployed in a DARPA-funded application is going to be a great learning space for how they can be used in a consumer context.”