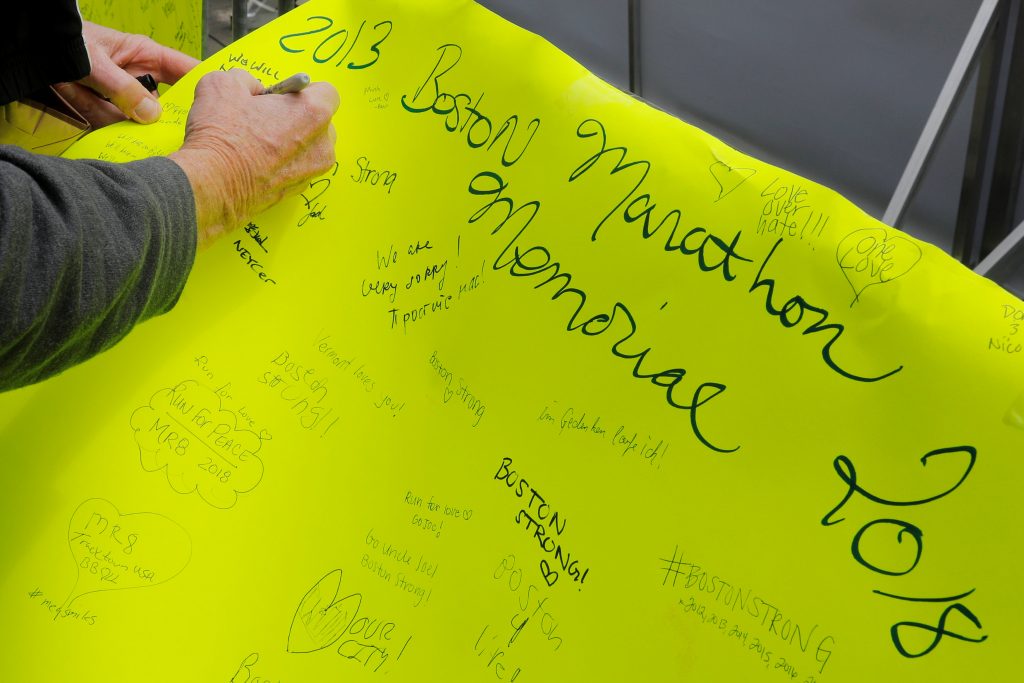 Democratic Mayor Marty Walsh and Republican Gov. Charlie Baker laid wreaths early in the morning at the spots along downtown Boylston Street where two bombs killed three spectators and maimed more than 260 others on April 15, 2013.

One wreath was laid by Baker in front of Marathon Sports as bagpipes played in the background. In another spot, the family of victims Martin Richard and Lü Lingzi were comforted by Walsh as another wreath was placed where the second bomb went off by the Atlantic Fish restaurant. Hundreds of silent people gathered to watch behind barricades.

Both Baker and Walsh addressed families and survivors at a private ceremony inside the Boston Public Library.

“On April 15, 2013, our city changed forever, but over the last five years, we have reclaimed hope. We have reclaimed the finish line and Boston has emerged with a new strength, a resilience rooted in love,” Walsh said.

Jane and Henry Richard, siblings of the youngest victim Martin Richard, and members of the family’s foundation, also spoke.

Henry Richard urged those listening to follow Martin’s message to “choose kindness and do more.” The family’s foundation was founded in 2014 to connect young people with opportunities for volunteerism and community engagement.

Lingzi’s uncle, Sherman Yee, was present at the ceremony and private gathering. He said, “The family has been ‘overwhelmed by love and support from all over the world.'” He called Lingzi an “extraordinary girl” who represented the youth that come to the U.S. from China to study.

“While she didn’t realize her dreams, as her family, we invest in the youths through our foundation to keep her memory going,” he said.

Arreen Andrew, of Boston, said she was in the crowd across the stand when the first bomb went off in 2013.

“It was sheer panic,” she recalled. “Just this sense of ‘No, this can’t happen to us.”

Five years later, while the day is still a reminder of some painful memories, she said it has also become a day about the relationships that have since been formed and “reformed and recreated our entire community.”

At 2:49 p.m., a citywide moment of silence was observed, and the bells of Old South Church were rung to mark the moment five years ago when the first bomb exploded. Sunday is “One Boston Day,” devoted to blood drives and acts of kindness.

Security is tight for Monday’s 122nd running of the iconic race.