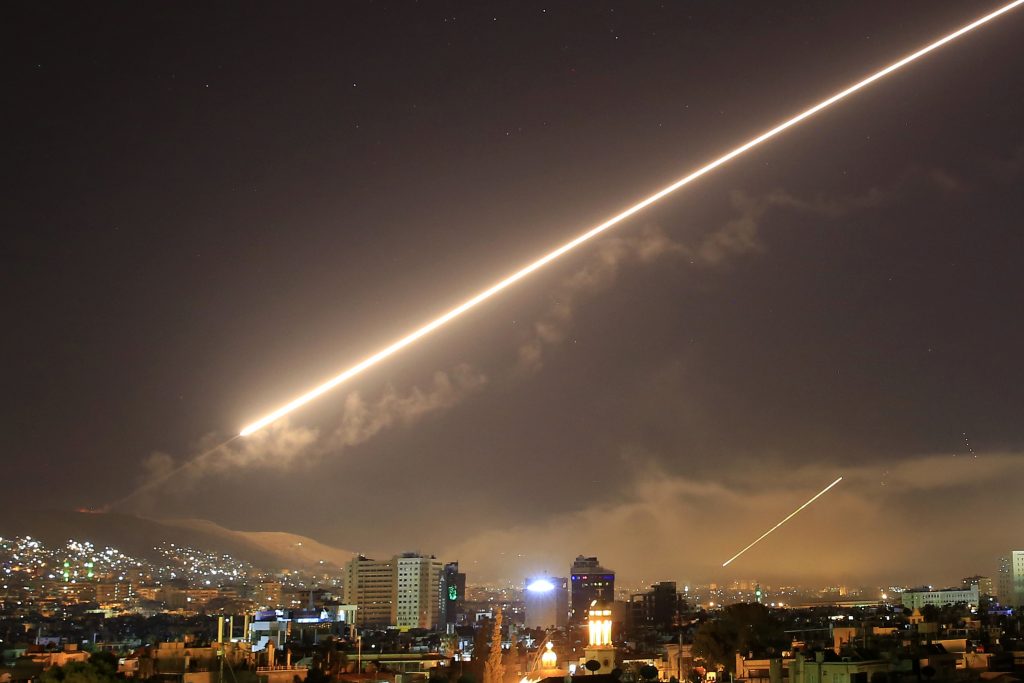 The United States, France and Britain launched 105 missiles overnight in retaliation for a suspected poison gas attack in Syria a week ago, targeting what the Pentagon said were three chemical weapons facilities including a research and development in Damascus’s Barzeh district and two installations near Homs.

The bombing was the biggest intervention by Western countries against Assad and his superpower ally Russia, but the three countries said the strikes were limited to Syria’s chemical weapons capabilities and not aimed at toppling Assad or intervening in the civil war.

The air attack, denounced by Damascus and its allies as an illegal act of aggression, was unlikely to alter the course of a multi-sided war that has killed at least half a million people.

“We believe that by hitting Barzeh in particular we’ve attacked the heart of the Syrian chemicals weapon program,” Lieutenant General Kenneth McKenzie said at the Pentagon.

However, McKenzie acknowledged elements of the program remain and he could not guarantee that Syria would be unable to conduct a chemical attack in the future.

U.S. ambassador to the United Nations, Nikki Haley, said at an emergency meeting of the U.N. Security Council that Trump told her that if Syria uses poisonous gas again, “The United States is locked and loaded.”

The Western countries said the strikes were aimed at preventing more Syrian chemical weapons attacks after a suspected poison gas attack in Douma on April 7 killed up to 75 people. They blame Assad’s government for the attack.

In Washington, a senior administration official said on Saturday that evidence showed both chlorine and the nerve agent sarin were used in that attack, prompting the strikes.

But speaking at a summit in Peru, U.S. Vice President Mike Pence seemed less sure of the use of sarin, saying that Washington may well determine that it was used along with chlorine.

Ten hours after the missiles hit, smoke was still rising from the remains of five destroyed buildings of the Syrian Scientific Research Center in Barzeh, where a Syrian employee said medical components were developed.

There were no immediate reports of casualties.

Syria released video of the wreckage of a bombed-out research lab, but also of Assad arriving at work as usual, with the caption, “Morning of resilience.”

Russian and Iranian military help over the past three years has let Assad crush the rebel threat to topple him.

The United States, Britain and France have all participated in the Syrian conflict for years, arming rebels, bombing Islamic State terrorists and deploying troops on the ground to fight that group. But they have refrained from targeting Assad’s government, apart from a volley of U.S. missiles last year.

Although the Western countries have all said for seven years that Assad must leave power, they held back in the past from striking his government, lacking a wider strategy to defeat him.

Syria and its allies also made clear that they considered the attack a one-off, unlikely to do meaningful harm to Assad.

A senior official in a regional alliance that backs Damascus told Reuters the sites that were targeted had been evacuated days ago thanks to a warning from Russia.

Russia had promised to respond to any attack on its ally, but the Pentagon said no Russian air defense systems were used. Syria fired 40 unguided surface-to-air missiles – but only after the Western strikes had ended, the Pentagon said.

“We are confident that all of our missiles reached their targets,” McKenzie said.

Washington described the strike targets as a center near Damascus for the research, development, production and testing of chemical and biological weapons, a chemical weapons storage site near the city of Homs, and another site near Homs that stored chemical weapons equipment and housed a command post.

The Pentagon said there had been chemical weapons agents at one of the targets, and that the strikes had significantly crippled Syria’s ability to produce such weapons.

The Western assault involved more missiles than a U.S. attack last year but struck targets limited to Syria’s chemical weapons facilities. The U.S. intervention last year had effectively no impact on the war.

Syria agreed in 2013 to give up its chemical weapons after a nerve gas attack killed hundreds of people in Douma. Damascus is still permitted to have chlorine for civilian use, although its use as a weapon is banned. Allegations of Assad’s chlorine use have been frequent during the war although, unlike nerve agents, chlorine did not produce mass casualties as seen last week.