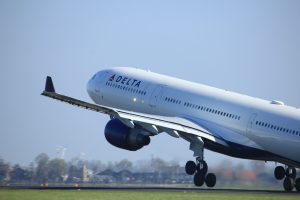 Airlines are struggling to raise prices, but they keep posting impressive profits by raising money other ways — charging extra for checking a bag or changing a flight, putting their names on credit cards, and hauling cargo.

Delta Air Lines Inc. is using that playbook and strong business-travel traffic across the Atlantic to mostly offset higher fuel and labor costs.

Delta reported Thursday that it earned $547 million in the first quarter, typically the weakest period financially for airlines. While that was down 2.5 percent from a year ago, the results were slightly better than Wall Street expected, boosting Delta shares.

Executives of Atlanta-based Delta said they were surprised by a strong rebound in travel across the Pacific and even more by demand for trans-Atlantic flights, especially among high-fare corporate travelers. President Glen Hauenstein said that despite Britain’s looming exit from the European Union, “business traffic to the U.K. has never been stronger.”

Revenue from U.S.–Europe flights jumped 14.7 percent from a year earlier, easily outpacing gains in other parts of the world and in the United States.

Delta and rivals American and United face growing competition from low-cost European airlines that tout cheap fares across the Atlantic. The U.S. carriers are fighting back by offering their own cut-rate “basic economy” fares.

The parent of British Airways, a partner of American, said Thursday that it bought a minority stake in one of those budget carriers, Norwegian Air Shuttle. On a conference call with analysts and reporters, Delta CEO Ed Bastian declined to discuss what the British Airways maneuver might mean for competitors including Delta, but he said Delta doesn’t plan to invest in Norwegian.

Delta predicted record levels of travel between the U.S. and Europe this summer. Executives said the airline has other promising sources of revenue.

Bastian said Delta’s credit-card deal with American Express, part of the airline’s SkyMiles loyalty program, “will continue to grow at a double-digit clip,” and so will money from cargo and aircraft maintenance work.

Revenue from tickets now accounts for three-fourths of airline revenue, down from nearly 90 percent two decades ago, and airlines are trying to drive that percentage even lower. An analyst told Delta executives Thursday that if they can reduce reliance on fares to two-thirds of total revenue the market will value Delta stock more highly.

For the quarter ended March 31, Delta said that excluding one-time items it would have earned 74 cents per share, a penny better than forecast by analysts surveyed by FactSet and Zacks Investment Research.

Core passenger revenue rose a healthy 7 percent but was overshadowed by a 23 percent increase in cargo revenue and a 32 percent jump in a broad category of “other” revenue that includes money from the loyalty program.

Delta predicted that adjusted earnings in the second quarter will range between $1.80 and $2 per share, in line with analysts’ forecast of $1.92 per share, according to FactSet.