National Trump: DACA Deal for Young Immigrants Is Off
National 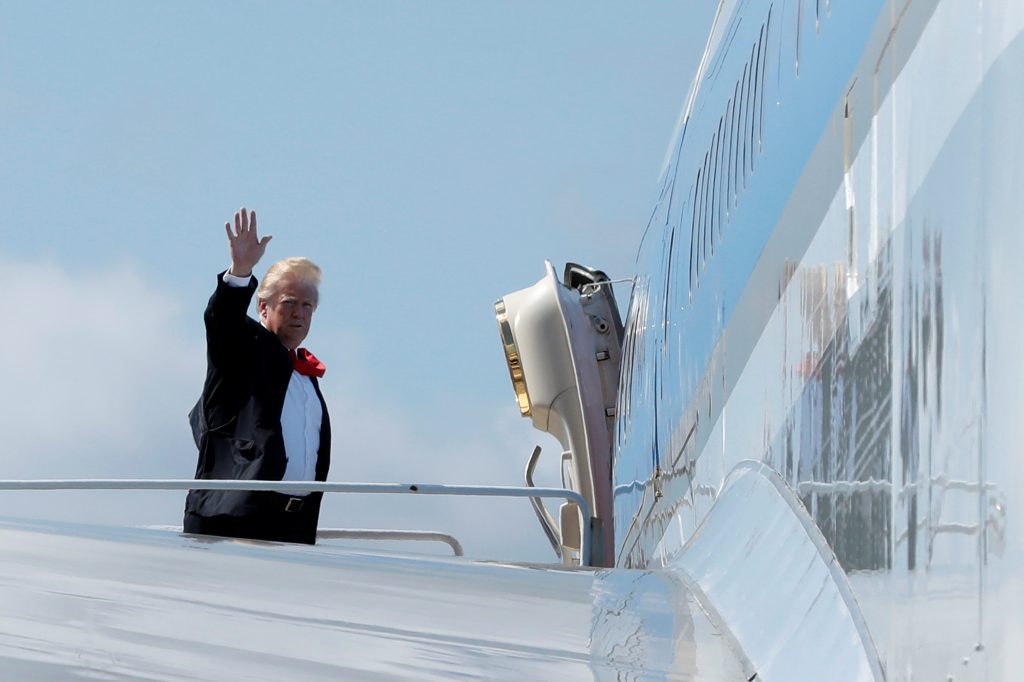 President Donald Trump said on Sunday that there will be no deal on legalizing the status on young adult immigrants known as Dreamers, declaring on Twitter that the U.S.-Mexico border is becoming more dangerous.

Trump posted that :”Border Patrol Agents are not allowed to properly do their job at the Border because of ridiculous liberal (Democrat) laws like Catch & Release. Getting more dangerous. ‘Caravans’ coming. Republicans must go to Nuclear Option to pass tough laws NOW. NO MORE DACA DEAL!”

He also threatened to kill the North American Free Trade Agreement, which is currently being renegotiated with Mexico and Canada.

DACA (Deferred Action for Childhood Arrivals) is the program created in 2012 under Democratic former President Barack Obama that Trump sought to rescind last autumn. Designed for individuals brought to the United States as children by parents who were undocumented immigrants, the program shielded the individuals from deportation and gave them work permits.

Trump had said he was open to brokering a deal with congressional Democrats who want to protect DACA in exchange for funding to build a U.S.-Mexico border wall, a frequent campaign trail promise. He insisted during his run for the White House that Mexico would pay for the wall.

Although Trump threatened a veto last month of an omnibus spending bill because it did not address the fate of Dreamers and did not fully fund his border wall, he did sign the bill.

In the months after Trump took office, the number of apprehensions of illegal crossers along the U.S.-Mexico border dropped dramatically, from more than 42,400 arrests in January 2017 to a low of around 15,700 in April, according to data from U.S. Customs and Border Protection. Since then, the number of arrests has risen and in the first months of 2018 was above the levels seen during the Obama administration.

“Mexico has got to help us at the border,” the president told reporters. “A lot of people are coming in because they want to take advantage of DACA. They had a great chance. The Democrats blew it.”

His DACA tweets came shortly after a report on Fox News that a “caravan” of mostly Honduran migrants was crossing Mexico and headed to the United States, “either illegally or by asking for asylum.”

In the town of Ixtepec, more than 1,500 men, women and children from Honduras, El Salvador and Guatemala waited in a sweltering warehouse on Saturday, mattresses rolled and bags packed, as local authorities and immigration officials from Mexico’s federal government organized 15 buses to take them to their next stop on the long journey north.

By traveling together, the immigrants hope to protect themselves from the crime and extortion that makes the route through Mexico dangerous. They say some but not all of them will seek asylum if they reach the United States.

If recent border crossers do not claim asylum, they can usually be deported quickly. But if they say they fear targeted violence or persecution in their home countries, they can begin the long process of petitioning for asylum in immigration court.

In such instances, the government can choose to release those individuals while their cases are processed. Trump and his attorney general, Jeff Sessions, have often criticized the Obama administration for routinely paroling asylum seekers.

That situation has changed. Last month, the American Civil Liberties Union filed a class-action lawsuit on behalf of nine plaintiffs alleging that U.S. Immigration and Customs Enforcement officers were now detaining almost all adults who seek asylum at a port of entry.

Trump said on Twitter on Sunday that Mexico is doing “very little, if not NOTHING,” to stop the flow of people across the southern border. “They must stop the big drug and people flows, or I will stop their cash cow, NAFTA. NEED WALL!”

Last week, U.S. Trade Representative Robert Lighthizer expressed optimism that negotiations to modify NAFTA to terms more favorable to the United States were making progress and that a deal in principle could be reached quickly.

The thorniest issues in the NAFTA talks concern U.S. demands on automotive trade and dispute settlement systems. Linking the future of the 24-year-old trade deal to Trump’s border wall plan has never been among U.S. negotiating objectives.