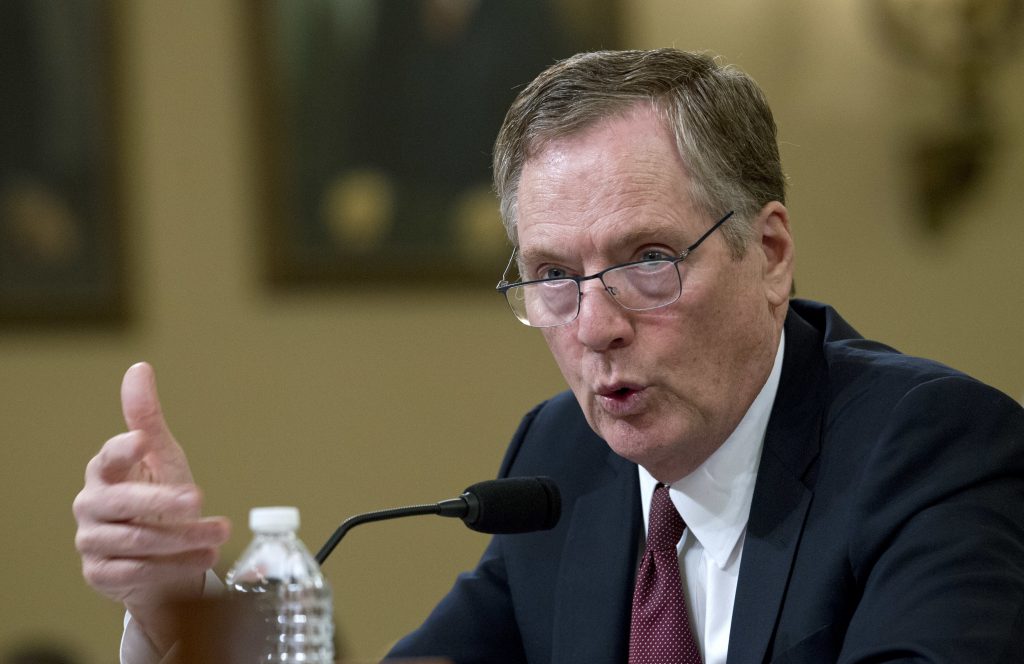 The United States agreed to revise its trade deal with South Korea and spare the country from President Donald Trump’s steel tariff, as the allies sought to resolve disputes before planned meetings with Kim Jong Un.

To avoid the steel tariff, South Korea would limit U.S. shipments of the metal to about 2.7 million tons a year, the ministry said. The country also agreed to double to 50,000 the number of U.S. cars that could be imported without meeting local safety standards, although American manufacturers sell far fewer cars in the market.

Lighthizer’s press office didn’t respond to requests for comment on the agreement. White House trade adviser Peter Navarro told CNBC on Monday that “it looks like we’re going to have a very, very good result” on Korus.

The deal would be Trump’s first since taking office, promising to put “America First” last year and triggering a series of trade disputes with nations from Canada and China. Trump criticized the U.S.’s six-year-old trade deal with South Korea as a “job killer,” and opened negotiations, even as he sought President Moon Jae-in’s help to pressure North Korea over Kim’s nuclear weapon’s program.

The disagreement threatened to drive a wedge between the two allies as Moon prepared to meet Kim next month, an encounter that Trump needs to pave the way for his own proposed summit with the North Korean leader. Moon urged Trump “to show the world that our alliance is very solid” and resolve their trade disputes in a phone call earlier this month.

“Ahead of the inter-Korean summit in late April and the U.S.-North Korea summit in May, we’re at a moment where close cooperation is more important than at any other time,” Yoon Young-chan, Moon’s chief communications official, told reporters Monday. “We can now solidify the already water-tight cooperation between South Korea and the U.S.”

South Korean Trade Minister Kim Hyun-chong said the country’s tariff exemption was the first granted by Trump on the country level, and officials were still discussing with the U.S. whether it would be permanent or expire after a time. The Korea Iron & Steel Association welcomed the deal while saying the quota was smaller than the industry wanted.

Kim cautioned that risk of trading with the U.S. would persist during Trump’s presidency. U.S. officials were most interested in the car trade, he said.

Korea’s trade surplus with the U.S. was about $18 billion last year, down from $23 billion in 2016, according to the Korea International Trade Association. Cars accounted for more than 70 percent of the value of the surplus.

The U.S. will maintain tariffs on Korea’s exports of pick-up trucks until 2041, from the previously agreed 2021, according to the ministry’s statement. Currently, no car company exports these vehicles from South Korea to the U.S., which factored into the talks, Kim said.

Previously lifted tariffs on South Korean car exports won’t be re-imposed, Kim said, and the nation planned to ease some of the safety and environmental regulations on imported U.S. cars. The government will allow U.S. manufacturers to sell up to 50,000 cars in South Korea that don’t meet local standards. The current ceiling is 25,000 cars, but there’s no U.S. company that sells more than 10,000 cars a year, Kim said.

Korea didn’t agree to any additional opening of the agriculture market and also maintained its stance in other sensitive areas, the statement said. The two countries were able to reach agreement by narrowing the range of discussions and will seek to settle the details soon, the ministry said.

The two countries also discussed changing the wording of the Investor-State Dispute Settlement and trade remedies, and Korea said it will review a request from the U.S. for Seoul to offer equal incentives to global pharmaceutical companies in developing new medicines.

“We expect to sign that agreement soon,” Mnuchin said on Fox News, calling the agreement a win-win.