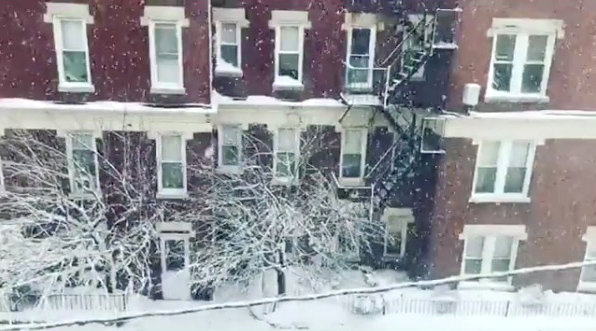 The fourth nor’easter in three weeks is set to smack the East Coast on the first day of spring.

The bulk of the dangerous, wind-driven snow and sleet is expected to wallop New Jersey, Maryland, Delaware and parts of eastern Pennsylvania before heading off to Nantucket early Thursday, the National Weather Service said.

Sleet and freezing rain are expected Tuesday afternoon, the first day of spring. On Wednesday, about 6 to 9 inches (16 to 23 centimeters) of snow is expected, with some areas getting nearly a foot (30.5 centimeters).

The jet stream, the upper level river of air that guides weather, is stuck in a plunging pattern that brings plenty of moisture from the south up the East Coast, said Brian Hurley, senior forecaster at the National Weather Service’s Weather Prediction Center. Four nor’easters in three weeks is highly unusual, but it happens when a pattern locks in. And that’s happened, Hurley said.

Officials are cautioning against unnecessary travel Wednesday afternoon and evening, when snow could be falling as much as 3 inches an hour.

Widespread power outages are possible, especially Wednesday, with gusts of up to 35 mph (56 kph) at times.

“Upper level patterns like this tend to repeat and you tend to get these serial storms, one after the other,” weather.us meteorologist Ryan Maue said, adding that Europe will get the same drumbeat of storms a few days later.

But “the calendar is catching up to spring,” Maue said. “Thankfully, you’re going to see some spring [weather] pretty soon.”