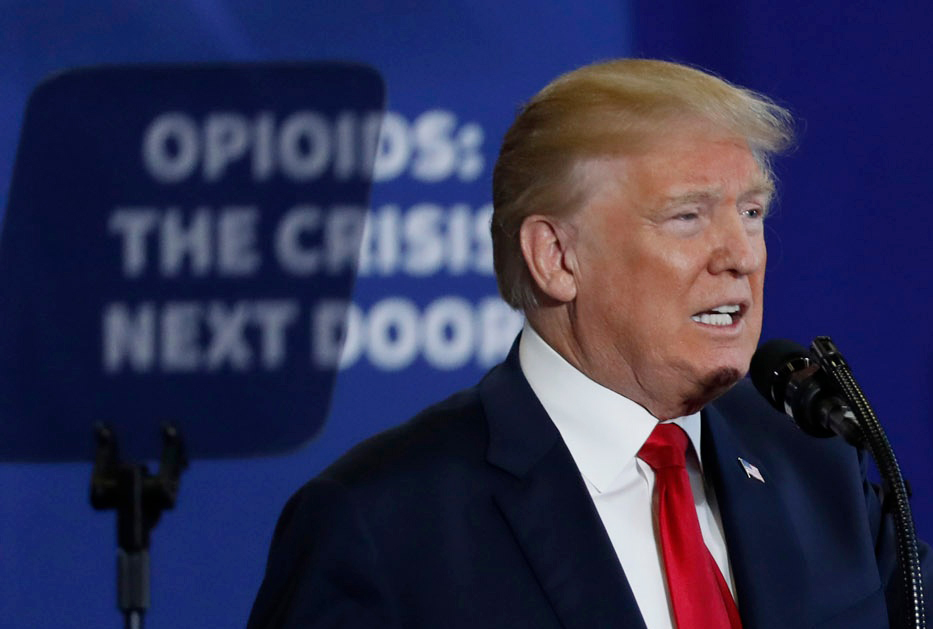 President Donald Trump, targeting the U.S. opioid epidemic, called again on Monday for the execution of drug dealers, a proposal that so far has gained little support in Congress, amid criticism from some drug abuse and criminal justice experts.

At an event in Manchester, New Hampshire, Trump unveiled an anti-opioid abuse plan, including his death penalty recommendation, new funding for other initiatives and stiffer sentencing laws for drug dealers.

He said the United States must “get tough” on fighting opioid abuse. “And that toughness includes the death penalty,” he said.

He added that he was working with Congress to funnel $6 billion in new funding in 2018 and 2019 to help fight the opioid crisis.

Addiction to opioids — mainly prescription painkillers, and illegal substances— is a growing U.S. problem, especially in rural areas. According to the Centers for Disease Control and Prevention, 42,000 people died from opioid overdoses in 2016.

For Trump, the visit to New Hampshire returns him to a state that gave him a key Republican primary election win when he was a political newcomer in 2016. Back then, he promised to tackle the opioid crisis, which is severe in the New England state.

In October, he declared the crisis a public health emergency, but without providing more money. Some critics, including Democratic lawmakers, said then that the declaration was meaningless without additional funds.

The new plan will seek to cut opioid prescriptions by a third over the next three years by changing federal healthcare programs, White House officials said.

Trump also said the plan would crack down on international and domestic illicit drug supply chains. Part of that would include requiring electronic data for 90 percent of international mail shipments with goods, he said.

He said the United States would “engage with China and expand cooperation with Mexico to reduce supplies of [illegal substances] and precursor chemicals.”

The Justice Department will target negligent physicians and pharmacies, he said, adding that he was considering litigation against drug companies implicated in the opioid crisis.

The White House did not offer examples of when it would be appropriate to seek the death penalty for drug dealers and referred further questions to the Justice Department.

The Justice Department said it would release a statement later on Monday.

Dr. Harold Pollack, an urban public health professor at the University of Chicago, said, “I don’t think the death penalty for drug dealers will accomplish very much.”

He said there was little evidence that tougher sentencing reduced the availability of street drugs.

Pollack urged Trump to work with Republican state governors to expand the Medicaid federal health program so that drug addicts could get more access to healthcare and counseling.

David Safavian, deputy director for the American Conservative Union Foundation’s Center for Criminal Justice Reform, said Trump’s plan had some good parts, including focusing on addiction as a way to lower crime rates.

“Like any plan, there are some areas where the details matter,” he said. “For example, identifying those reporting to prison with addiction issues is an important first step.”

It was also important to ensure the Bureau of Prisons had sufficient resources to treat addicted inmates so they could avoid a cycle of abuse and incarceration, he said.

Kevin Ring, president of Families against Mandatory Minimums, which campaigns against sentencing they see as overly harsh, said Trump’s plan calling for stiffer sentences or seeking the death penalty against drug dealers, was merely “doubling down on a failed strategy.”