With great tzaar we report the petirah of Hadmor Hagaon Harav Mordechai Hager, zt”l, who was niftar this morning in New York after many tefillos of Klal Yisroel, at the age of 95.

The levayeh was held Friday afternoon at Bais Medrash Hagadol in Monsey, and kevurah was in the Vizhnitzer cemetery in Monsey.

The great Rebbe and tzaddik Harav Mordechai Hager was born in Grosswardein (Oradea) Romania, on 18th Tammuz, 5682 (July 14, 1922) to his father the Imrei Chaim, the Admor Maran Harav Chaim Meir Hager, zy”a, and his wife Margalit, daughter of Harav Zev Twersky, the Admor of Rachmastrivka, zy”a. 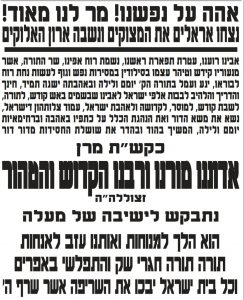 As a child he was very close to his grandfather, the Saba Kadisha “Ahavas Yisrael” of Vizhnitz, zy”a.

In 5702, he went to learn for a zman by the Admor Harav Yoel of Satmar, zy”a, and then for two years by Harav Yosef Greenwald of Pupa (the Vaychi Yosef), zy”a. Throughout his life, he would consider these two to be his primary rebbeim.

In 5704, as the world closed in on Hungarian Jewry, Reb Mordechai was able to escape across the border to Bucharest, Romania, where stayed for the duration of the war. Every year, Reb Mordechai would celebrate the 34th day of the Omer, the day on which he made his escape.

In 5705, he married Feige Malka, daughter of Harav Yaakov Yosef, the Admor of Skver, zy”a. Tragically, she was niftar, childless, just one year later. The following year, he married her younger sister, Sima Mirel, with whom he had 14 children.

Reb Mordechai, his wife, and her family then traveled to the United States, where he began serving as Rav of the Vizhnitzer Chassidim in America – first in Boro Park, and then in Williamsburg.

In 5724, no longer wishing to live in a crowded city, and he moved to Monsey.

Reb Mordechai wrote in his will that all his sons should be crowned as Rebbes, each one in a different city around the world. He had already distributed his sefarim and other sacred items to his sons.

In the past seven years, he had taken sick and couldn’t read. Since he did not want to stop learning Torah, he asked that recorded shiurim be brought to him. From among those that were brought to him, he chose to listen to the Gemara lectures delivered by HaRav HaGaon Chaim Shmerler, shlita.

Reb Mordechai’s 14 sons and daughters are:

Harav Pinchas Shalom (niftar 5775) served as Rav of the Toras Chaim Vizhnitz community in Boro Park. He was married to Zisel Raizel, daughter of the Admor HaRav Shmuel Tzvi Horowitz of Spinka, zy”a. His son Rav Yaakov Yosef succeeded him as Rav of Toras Chaim.

Harav Yisrael, Rav of the Toras Chaim Vizhnitz community in Monsey. He is married to Miriam, daughter of Harav Eliezer Meisels, zy”a, of Uhell. He will be the Rav of the Beis Medrash HaGadol of Vizhnitz.

Harav Menachem Mendel, Rav of the Toras Chaim Vizhnitz community in Kiamesha Lake, New York. He is married to Feige Shifra, daughter of his uncle HaRav Chai Yitzchak Twersky, the Admor of Rachmastrivka shlita in America.

Harav Yitzchak Yochanan, Rav of the Toras Chaim Vizhnitz community in Williamsburg. He is married to Chaya Mindel, daughter of Harav Moshe of Kiviashed, zt”l.

Harav David, Rav of the Imrei Chaim Vizhnitz community in London. He is married to Chana Miriam, daughter of Harav Moshe Taub, shlita, Kalover Rebbe in the United States.

Rav Aharon, Rav of the Ahavas Yisrael Vizhnitz community in Montreal. He is married to Sarah, daughter of Harav Nafali Aryeh Taub, zy”a, a son p-f the Kalover Rebbe, zy”a, in the United States.