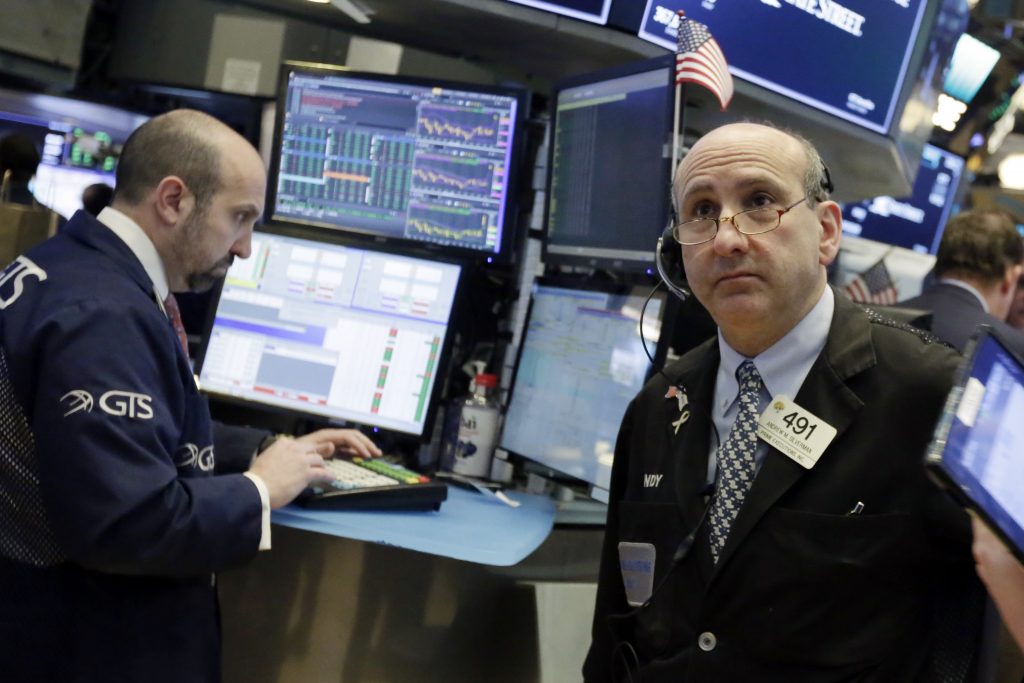 Stocks are lower Thursday after a midday rally faded. Chemicals maker Monsanto is falling after Bloomberg News reported that U.S. authorities have concerns about its sale to Bayer. Household goods makers and smaller companies are also down. Toymakers Hasbro and Mattel are declining as Toys R Us moves toward shuttering its U.S. stores.

SEEDS OF DOUBT: Monsanto stock fell $4.99, or 4.1 percent, to $118.16 after Bloomberg News reported that antitrust regulators want Bayer to sell more assets before they allow the company to buy Monsanto. The report cited unnamed sources familiar with the matter. Bayer agreed to buy Monsanto for $66 billion in 2016, and its U.S.-traded shares rose 22 cents to $29.76 Thursday.

TOYS WINDING DOWN: Mattel declined 39 cents, or 2.8 percent, to $13.79 and Hasbro fell 95 cents, or 1.1 percent, to $87.58 as Toys R Us prepares to shut down its U.S. operations. CEO David Brandon told employees Wednesday the chain plans to liquidate all of its U.S. stores, according to an audio recording of the meeting obtained by The Associated Press. The company has 740 stores and 30,000 employees, and its struggles have hurt both Hasbro and Mattel because they each get about 10 percent of their sales from Toys R Us.

The 70-year-old company filed for Chapter 11 bankruptcy protection in late October and said in late January that it would close 182 stores. Since that date, Mattel has plunged 22 percent and Hasbro has fallen 7 percent.

OUT IN FRONT: Technology companies did far better than the rest of the stock market in 2017 and that hasn’t changed this year. Technology is the only part of the market that has fully recovered from last month’s sell-off, and Lindsey Bell, an investment strategist at CFRA Research, thinks there is a good chance the industry will outpace the broader S&P 500 again this year.

“Our economy in general and our world in general is becoming more connected digitally and this is an area that’s going to continue to thrive as time goes on,” she said. She added that chipmakers and service companies like Alphabet and Facebook should continue to do well.

Bell said more deals are likely in the chip industry as both Broadcom and Intel look to buy other companies following the government’s decision to block Broadcom’s effort to buy Qualcomm.

Thanks to their big gains, technology companies now comprise one-fourth of the total value of the S&P 500. It’s been almost 20 years since any sector dominated the S&P 500 that way: according to S&P Global, technology made up one-third of the index in early 2000, at the height of the dot-com boom.

BARGAIN HUNTING: Discount retailer Dollar General climbed $3.88, or 4.3 percent, to $93.08 after it said shoppers spent more money per trip during the fourth quarter. The company also gave a strong forecast for the year. Competitor Dollar Tree gained $1.18, or 1.3 percent, to $93.99.

OFFICE MOVE: Consumer giant Unilever fell 99 cents, or 1.9 percent, to $52.35 after the company said it will put its sole headquarters in the Netherlands. For year it’s had dual head offices in London and Rotterdam. The company said it’s part of a restructuring aimed at making it a “more agile and more focused business.”

BONDS: Bond prices were little changed. The yield on the 10-year Treasury note stayed at 2.82 percent.