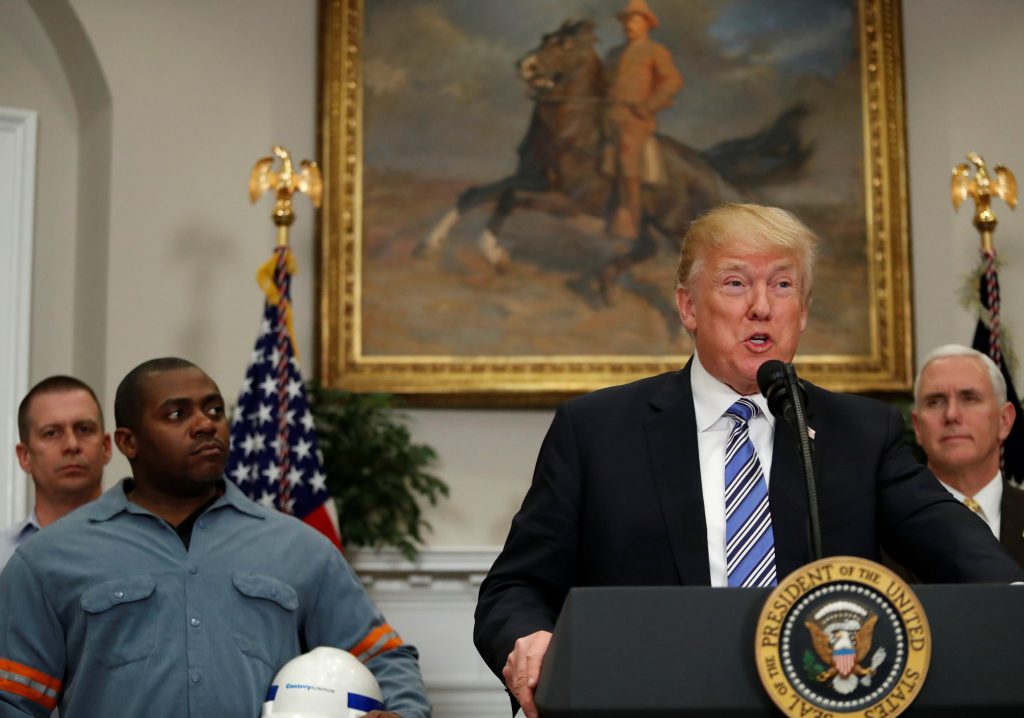 Unswayed by Republican warnings of a trade war, President Donald Trump ordered steep new tariffs on steel and aluminum imports to the U.S. on Thursday, vowing to fight back against an “assault on our country” by foreign competitors. The president said he would exempt Canada and Mexico while negotiating for changes to the North American Free Trade Agreement.

The new tariffs will take effect in 15 days, with Canada and Mexico indefinitely exempted “to see if we can make the deal,” Trump said. NAFTA talks are expected to resume early next month.

“The American aluminum and steel industry has been ravaged by aggressive foreign trade practices. It’s really an assault on our country. It’s been an assault,” Trump said at the White House. He was joined by steel and aluminum workers holding white hard hats.

American steel and aluminum workers have long been betrayed, but “that betrayal is now over,” Trump said. The former real-estate developer said that politicians had for years lamented the decline in the industries, but nobody was willing to take action.

As he has indicated previously, Trump said he would levy tariffs of 25 percent on imported steel and 10 percent on aluminum. But he said during a Cabinet meeting earlier in the day that the penalties would “have a right to go up or down depending on the country, and I’ll have a right to drop out countries or add countries. I just want fairness.”

Business leaders, meanwhile, have continued to sound the alarm about the potential economic fallout from tariffs, with the president and CEO of the U.S. Chamber of Commerce raising the specter of a global trade war. That scenario, Tom Donohue said, would endanger the economic momentum from the GOP tax cuts and Trump’s rollback of regulations.

“We urge the administration to take this risk seriously,” Donohue said.

The president suggested in the meeting with his Cabinet that Australia and “other countries” might also be spared, a shift that could soften the international blow amid threats of retaliation by trading partners.

People briefed on the plans ahead of the announcement said all countries affected by the tariffs would be invited to negotiate with the administration to be exempted from the tariffs if they can address the threat their exports pose to U.S. manufacturers. The exemptions for Canada and Mexico could be ended if talks to renegotiate NAFTA stall.

The process of announcing the penalties has been the subject of an intense debate and chaotic exchanges within the White House, pitting hard-liners against free trade advocates such as outgoing economic adviser Gary Cohn.

Congressional Republicans and business groups are bracing for the impact of the tariffs and the departure of Cohn, a former Goldman Sachs executive who has opposed them.

House Speaker Paul Ryan, appearing at a session with Home Depot employees in Atlanta, said ahead of Trump’s announcement, “I’m just not a fan of broad-based, across-the-board tariffs.” He pointed to the store’s many products that rely on steel and aluminum.

More than 100 House Republicans wrote Trump on Wednesday, asking him to reconsider “the idea of broad tariffs to avoid unintended negative consequences” to the U.S. economy and workers.

Arizona Sen. Jeff Flake, a Republican, said he plans to introduce legislation next week to nullify the tariffs, though he has acknowledged that finding the votes to stop the president’s actions could be difficult.

The president has said the tariffs are needed to reinforce lagging American steel and aluminum industries and protect national security.