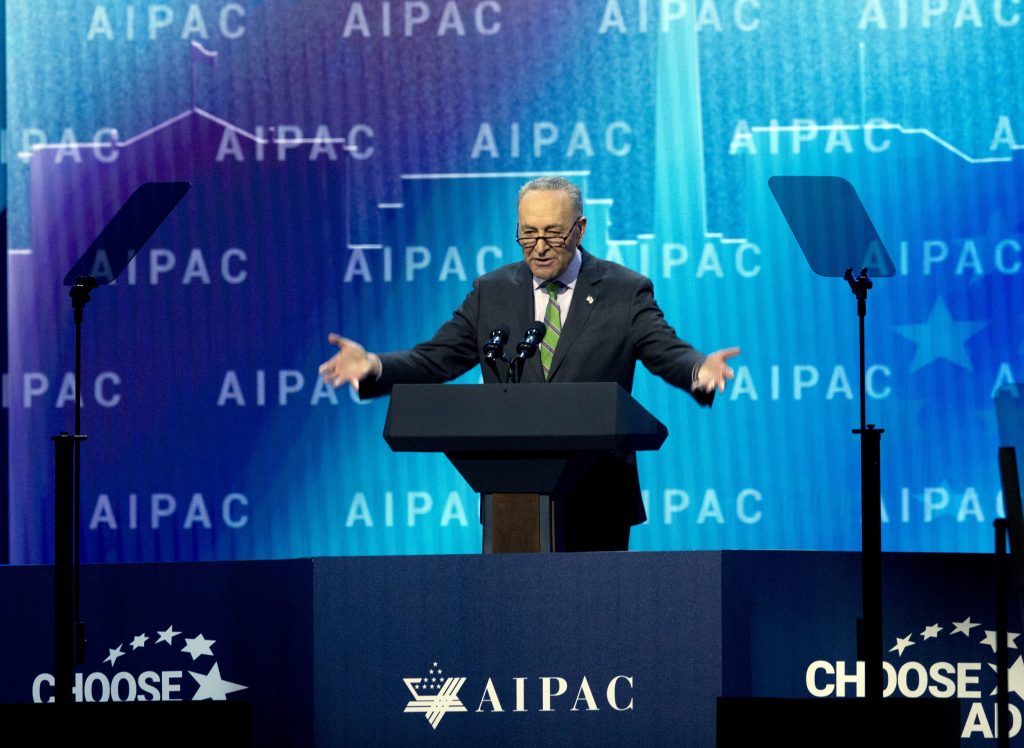 U.S. Senate Minority Leader Chuck Schumer told AIPAC’s annual conference on Monday night that Palestinian refusal to accept the existence of the state of Israel, is the block to peace and not the purported issues of settlements or borders.

“It’s sure not the settlements that are the blockage to peace,” Schumer said, noting that after Israel dismantled the Jewish communities of Gush Katif in Gaza as a painful concession to peace, the Palestinians soon moved into the vacated areas and used them as launching areas for rockets against Sderot and elsewhere in southern Israel.

Schumer also forcefully rejected borders as a phony issue. “They forget during the negotiations in 2000, Ehud Barak was making huge territorial concessions that most Israelis didn’t like; it was Arafat who rejected the settlement. It’s not the borders either. And it’s certainly not because we’ve moved the embassy to where it should belong in Yerushalayim. It’s not that either.”

The senator proceeded to tell the gathering the real reason that the peace process has stagnated:

“Because the fact of the matter is that too many Palestinians and too many Arabs do not want any Jewish state in the Middle East. The view of Palestinians is simple, the Europeans treated the Jews badly, culminating in the Holocaust, and they gave them our land as compensation.

“So that’s the reason there is not peace. They invent other reasons, but they do not believe in a Jewish state and that is why we, in America, must stand strong with Israel through thick and thin. We must, because that is the reason, not any of these other false shibboleths why there is not peace in the Middle East.”

During his speech, Schumer urged passage of the Taylor Force Act, decried the anti-Israel bias of the international community and denounced the BDS movement as anti-Semitism.

“First, we must pass and highlight the Taylor Force Act, which will bring an end to American dollars that directly benefit a Palestinian Authority until it ceases making payments to the families of terrorists, stops calling them martyrs, stops giving them parades.

“Second, we must continue to stand firm against the profoundly biased campaign to delegitimize the State of Israel through boycotts, divestment and sanctions. While Iran publicly executes its citizens, Turkey jails its journalists, and Arab states torture and kill prisoners…Why does BDS single Israel out alone for condemnation when there is such a double standard – when the world treats everybody one way and the Jew or the Jewish State another way?

“There’s only one word for it: anti-Semitism. Let us call out the BDS movement for what it is. Let us delegitimize the delegitimizers by letting the world know when there is a double standard, whether they know it or not, they are actively participating in an anti-Semitic movement.

“While Putin enables Assad’s atrocities in Syria, while a humanitarian crisis unfolds in Yemen, while human rights abuses happen every day to so many in Iran, somehow, to some, Israel receives the blame for a chaotic Middle East,” he said.

“The world draws a false moral equivalence between Israel’s actions to defend herself and the actions of terrorists who use children as human shields in their evil campaign to push Israel into the sea,” Schumer said.

Echoing Israeli Prime Minister Binyamin Netanyahu’s warnings about the Iran menace, Schumer said, “We must highlight the danger that Israel faces from a newly-resurgent Iran now so active in Syria.”

“A few weeks ago, as you know, an Iranian drone came into Israeli airspace. Iran and its proxies are gaining a foothold in Syria near Israel’s northern borders. Last summer, Congress, Democrats and Republicans together granted the administration new authority to counter Iran’s malign activity.

“Now it must use it not only to combat Iran, but to push Russia to repel Iranian proxies in Syria. We can never be complacent about any threat near Israel’s borders and Iran is a threat right now. So we must do these things and more to ensure Israel’s security to educate the younger generations about the true nature of the situation in the Middle East, for the cause of Israel is too important to you and to me.”

Like Schumer, Menendez warned of Iran and advocated amending the nuclear deal to target Iran’s missile program and military adventurism in the Mideast.

He also urged the Trump administration to be tougher with Russia in Syria.

“These agreements with Russia are dangerous,” he said. “In Syria, here at home or around the world, Russia is not a partner for stability and peace. Russia has made its alliances clear.

Menendez, adopting Israel’s view of the disturbing developments in Syria, delineated the dangers:

“Iranian leaders, transferring weapons to Hezbollah, seek to build a land bridge from Tehran through Baghdad and Damascus to Beirut. Iran views the Syrian battlefield as a laboratory for training Iranian proxy forces devoted to a singular mission, Israel’s destruction, and we know that Russia has helped enable Iran’s expansion in Syria by prolonging Assad’s grip on power.

“Hand-in-hand criminal and terrorist, Putin and Assad have cleared a path for the Iranian regime to expand its military footprint. Make no mistake, Iran is building an advanced military presence in Syria and we risk willfully disregarding this reality if we cling to a failed policy of negotiating with Russia. That’s precisely what we are doing if we continue to seek out agreements to de-escalate areas in Syria.

“I continue to be guided by my belief that it is in the national interest and security of the United States to have a strong, unwavering alliance with the State of Israel, the one true democracy in a sea of autocracy, a steadfast ally of the United States, and a nation of incredible innovation and economic sway, and the country most likely to be voting with us in common cause in international forums.”

Menendez spoke of his ongoing efforts to organize bipartisan congressional support for curbing the Iranian thrust for regional hegemony:

“These growing threats demand that we do everything we can now to push back against Iran’s continued aggression. I have spent the better part of my more than two-and-a-half decades in Congress working to support strategic diplomatic multilateral efforts to confront Iran. That’s why last year I worked with a bipartisan group of my colleagues to author and pass the Countering America’s Adversary Through Sanctions Act, also known as CAATSA.

“At a time when bipartisanship division is too often the norm in Washington, Democrats and Republicans in the Senate voted by a margin of 98 to 2 to give the Administration more tools to sanction Iran for its nefarious behaviors. That’s a strong bipartisan vote. And I know that our success, in large part, is because of the AIPAC members in this room.”

On a personal note, Menendez thanked the pro-Israel lobby group for backing him during his corruption trial, which ended in a mistrial and the dropping of charges by the Justice Department. Menendez received a standing ovation as he walked to the podium to deliver his speech.