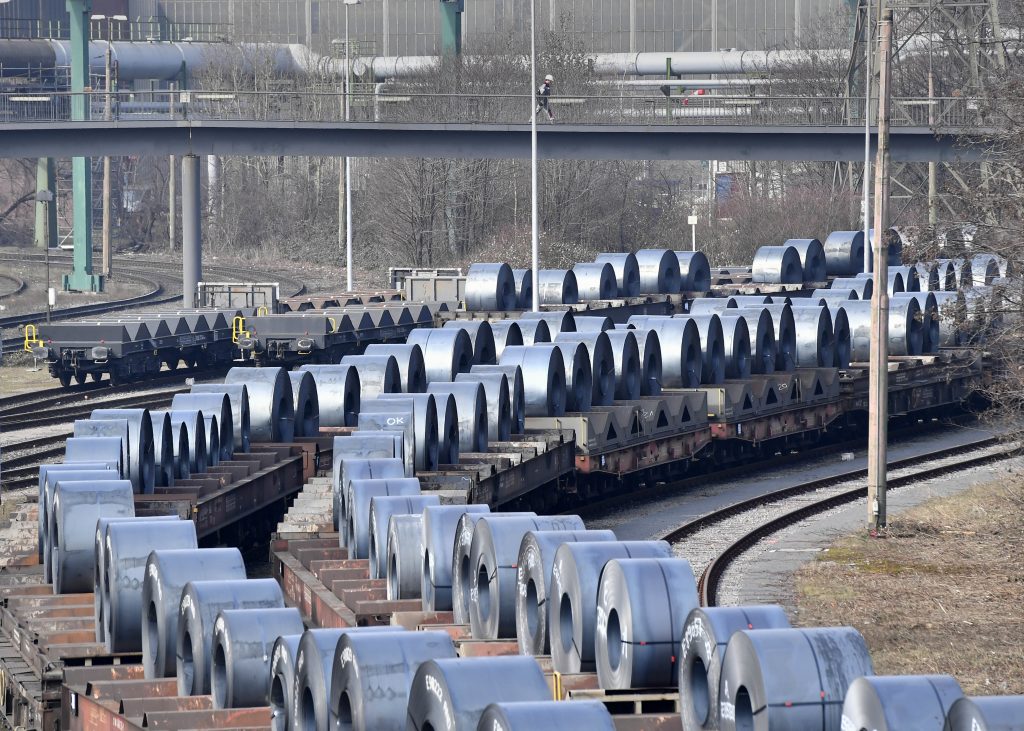 The outlook for the 19-country eurozone appeared murkier Monday with the rise of populist parties in Italy and mounting fears of a global trade war after U.S. President Donald Trump backed tariffs on aluminum and steel and warned that more could come, even on European cars.

This shift comes after the eurozone has been one of the bright spots in the global economy for months, with growth and job creation picking up steam after years of crisis management and a lack of confidence.

The eurozone economy appears to have peaked at a historically high level. Financial information firm IHS Markit said Monday that the eurozone economy hit a “speed bump” in February, possibly due to heightened political uncertainty in Germany and Italy.

The firm’s so-called purchasing managers index, a gauge of business activity, slipped to 57.1 points from January’s 12-year high of 58.8. Chris Williamson, the firm’s chief business economist, said it’s “too early to read too much” into the monthly decline but noted that some pullback was “always on the cards.”

Although the political uncertainty in Germany has been lifted by the Social Democrats’ decision to remain in a coalition government with Chancellor Angela Merkel’s conservative bloc, the situation in Italy is far from clear.

Two populist and stridently anti-European Union political groups — both fierce rivals — surged in Italy’s parliamentary election Sunday at the expense of the country’s traditional powers, but neither gained enough support to govern alone. That will herald a period of fraught discussions on forming a coalition government.

Preliminary results released Monday by Italy’s Interior Ministry showed the center-right bloc winning about 37 percent of the parliamentary vote and the populist 5-Star Movement getting about 32 percent. The center-left bloc was far behind with 23 percent support.

Both the center-right bloc and the 5-Stars insisted Monday that they should be given the right to form a government in Italy.

Analysts said it’s too early to gauge the impact of the vote on the Italian economy, which has been improving over the past year. In 2017, it expanded by 1.5 percent. Though that’s a full percentage point lower than the eurozone’s overall growth, it was Italy’s best performance since 2010.

“The prospect of a prolonged period of domestic political uncertainty risks weighing on the ongoing recovery,” said Nicola Nobile, an economist at Oxford Economics. “For now, we are not making any changes to our forecast but we will revisit it once the dust has settled.”

The longer-term worry for investors is that the Italian election may stoke renewed concern about populist forces in the eurozone, nearly a year after many of those were vanquished by the outcome of elections in the Netherlands and France.

At this time last year, the rise of populism was considered by many economists as the gravest cloud hanging over Europe’s economic future, especially as worries over Greece had abated. The great fear for those overseeing the euro currency is that a party may come into government seeking to get out of the single currency and revert to the country’s original currency.

Matteo Salvini, the head of Italy’s anti-migrant, euroskeptic League party declared Monday that the shared European euro currency is “wrong” and is ultimately destined to end.

“It’s a wrong currency and a wrong choice” for Italy, he said.

Salvini’s party is one of the two demanding to form Italy’s next government.

Externally, the eurozone economy faces another potential headwind from Pres. Trump, who said he planned to levy penalties of 25 percent on imported steel and 10 percent on aluminum imports from next week. Leading EU officials have warned of retaliation, which prompted Pres. Trump to warn he could go further and slap tariffs on European cars.

“This obviously raises the threat of a downwards spiral of tit-for-tat tariff barriers being imposed by the EU and the U.S., leading us to a genuine trade war, with spillover effects onto most other economies,” said Michael Every, a strategist at Rabobank International.