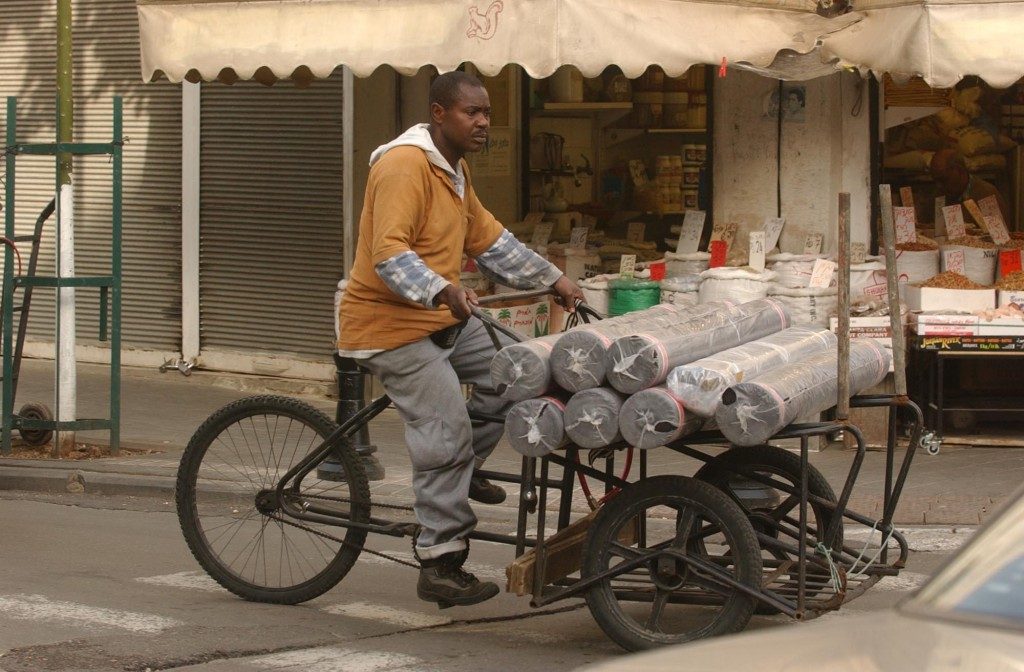 It was last Elul, at dusk, when a tourist vehicle with darkened windows entered the Neveh Shaanan neighborhood. As the car entered the Levinsky Garden, the passengers in the back seat adjusted their disguises, peaked caps and sunglasses. Yes, it was frightening.

They both held senior office: one was Prime Minister Binyamin Netanyahu and the other was Interior Minister Aryeh Deri. Both of them together and each of them separately would not have dared to venture openly here into Israel’s backyard. Welcome to Africa, Guinea, Rwanda, corner of Hatikva Neighborhood.

Once Jews lived here; now this place, South Tel Aviv, has become a second Africa, a place of violence and crime, dangerous to enter. The culture that the refugees brought from Darfur and Sudan rules here. They came here to improve their living conditions and earn more than they could in their impoverished countries. But, while doing so, they made and are making Israel into a second Africa.

As with every fundamental subject in the country, the enlightened people rose up and are challenging the “expulsion.” Their allegations are completely unfounded; these are not refugees who have come here, they are work migrants who so far have not bothered to apply for refugee status or who do not meet the criteria, according to the U.N. treaty.

In fact, no one is being expelled. They have been offered two alternatives: to leave the country voluntarily or to be held in custody in the Saharonim jail. Those who choose to leave Israel for a third country, with which Israel has signed an agreement, will receive a grant of $3,500 and a plane ticket. If it wasn’t our country, we would be saying, “Are you crazy? Such benefits?”

However, the Israeli Left is taking advantage of the opportunity to gloat at the Nigerians’ fate and is celebrating “the expulsion of the refugees.” The first comparison they make is with the Holocaust, of course. “You are friends of Nazis,” cried a Meretz MK to members of the committee who sat several weeks ago to speed up the process.

Let’s remember, the entire process has received the permission of the High Court, which ruled that there is no danger in the third country for the people being expelled, and that they can be expelled without their consent; however, for some reason, those people who usually expound on the importance of the opinions of the High Court judges refuse to accept their ruling in this case.

It is entirely clear that life in Israel is better than life in Africa, but this fact does not make all Africans refugees. Millions in Africa want to improve their standard of living, and the knowledge that they can do so in Israel will bring many more here, but we have the Sages’ ruling that “The poor of your city take precedence over the poor of another city.”

What is absurd in all this illegal immigration is the fact of their settling precisely here. Neve Shaanan was founded in 1931 by Jewish refugees from the 1929 riots. Today, Jews living in this neighborhood again feel like refugees, this time in the face of the wave of Africans who have settled there.

Interior Minister Deri courageously said, “I don’t know how this happened, but someone directed and led all these tens of thousands of people to live here. Not in the Bavli neighborhood or in North Tel Aviv, not in Ramat Hasharon, Savyon, Kfar Shmaryahu or Raanana. You won’t see them there. Inexplicably, nearly all of them came to South Tel Aviv, to a poor neighborhood, which in any case is suffering economically.”

We as chareidi Jews feel special pain at the terrible sight of synagogues that have been turned into places of entertainment and cafés for the immigrants. The Mount Sinai synagogue in the neighborhood is the best-known example. Wooden doors decorated with a Magen David are the only evidence that this was once an active synagogue.

The graffiti everywhere is reminiscent of other third-world countries, and all that remains is the faded Hebrew street sign at the corner that says “Kibbutz Galuyot” Street. How true.