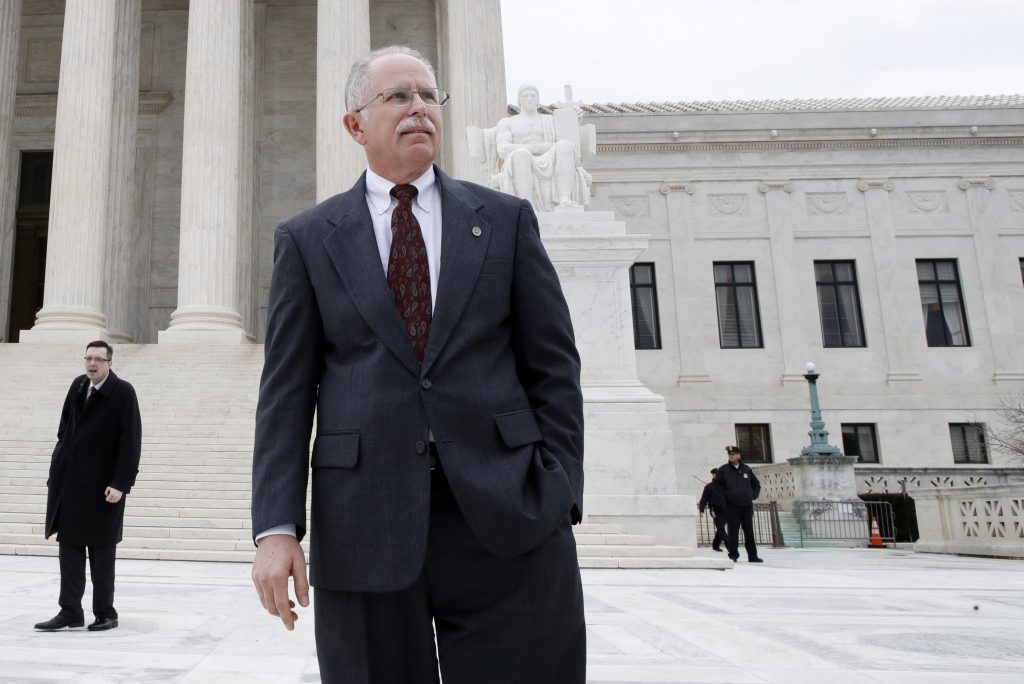 The U.S. Supreme Court appeared divided along ideological lines on Monday in a high-stakes case that could deprive unions representing police, firefighters and certain other public employees of a key source of funds — millions of dollars in fees they can collect annually from non-members.

During about an hour of arguments, conservative justices appeared sympathetic to the challenge brought by anti-union groups arguing that the fees that workers who are not members of public-sector unions must pay to help cover the costs of collective bargaining with state and local governments violate workers’ free speech rights.

The court has a 5-4 conservative majority. Conservative Justice Neil Gorsuch, the court’s newest justice and the likely deciding vote, did not speak during the argument.

Fellow conservatives Anthony Kennedy and Samuel Alito were particularly forceful in questioning the lawfulness of the fees, based on the notion that collective bargaining is in essence a political activity. Unions argue that their political activity is separate from negotiating contracts.

“Isn’t that the end of this case?” Kennedy said.

Liberal Justice Elana Kagan stressed how disruptive a ruling against the unions would be, leading to thousands of labor contracts being renegotiated and striking down laws in more than 20 states.

“When have we ever done something like that?” Kagan asked.

Dueling groups of protesters gathered outside the white marble courthouse ahead of the scheduled one-hour argument.

Union-backed protesters held signs saying “America needs union jobs,” while those supporting the challengers had signs saying “stand with Mark,” a reference to the plaintiff in the case, Illinois state worker Mark Janus.

Two dozen states require payment of these so-called agency fees, covering roughly 5 million public-sector workers. A Supreme Court ruling disallowing these fees would deal a setback to American organized labor at a time when the movement already is in a reduced state compared to the past.

Depriving unions of agency fees could undermine their ability to spend in political races. They typically back Democratic candidates over Republicans.

The justices considered a similar case in 2016, and after hearing arguments appeared poised to overturn a 1977 Supreme Court precedent that let unions force non-members covered by contracts negotiated by organized labor to pay fees in lieu of union dues to help cover non-political union expenditures.

But the death of conservative Justice Antonin Scalia the following month left the court with an even split of conservatives and liberals, and its 4-4 decision in March 2016 failed to settle the legal question. Monday’s argument did not illuminate whether Gorsuch will, as expected, join his conservative colleagues in ruling against the unions.

The 2016 case was brought by non-union California public school teachers. Janus, the plaintiff in the current case, is a child-support specialist for the state of Illinois who opted not to join the union that represents employees like him, the American Federation of State, County and Municipal Employees (AFSCME).

In both cases, the challengers argued that being forced to pay the agency fees to unions whose views they may not share violates their rights to free speech and free association under the U.S. Constitution’s First Amendment.

Unions in both cases contended that mandatory agency fees are needed in order to eliminate the problem of what they call “free riders” — non-members who benefit from union representation, for example, through salary and working conditions obtained in collective bargaining — without actually paying for it.

More than a hundred people loudly demonstrated outside the courthouse.

Jeralee Smith, a retired teacher, came out to support Janus in the case. “To force a person to pay for something with which we disagree is a travesty for democracy,” she said.

Dexter Guptill, a computer support technician for the American Federation of Teachers, said that if the justices rule against the unions, “my co-workers would wind up being forced to spend their effort representing essentially free riders.”