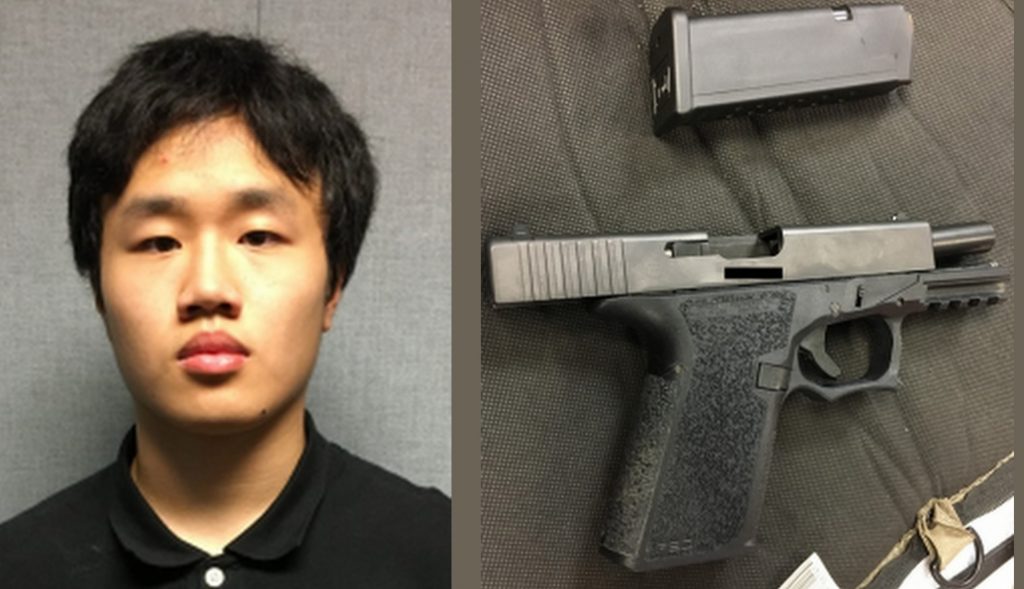 An 18-year-old Maryland student charged with bringing a loaded handgun to school has told detectives he regularly walked around school with a weapon hidden in a backpack or in a holster under his shirt to protect himself and classmates from a possible mass shooter, according to new court documents filed in his case.

The weapon, according to Alwin Chen — an honor student at Clarksburg High School 25 miles north of Washington arrested Feb. 15 — was a Glock semiautomatic handgun he built from parts ordered online and tools bought at Home Depot, the documents state. Chen also had access to weapons owned by his father and kept in the family’s townhouse, the filings state, including an AR-15 assault-style rifle, a shotgun and two revolvers.

Chen’s familiarity with guns, his willingness to bring a loaded weapon to school and his journal writings show he remains a public risk and should not be released from jail pending his trial, prosecutors said in court documents.

The Clarksburg senior was “always talking about bringing guns to school and saying how he would kill anyone,” another student told the police, according to the prosecutors’ new filing.

Chen was arrested 11 days ago after that same student alerted a school resource officer that Chen had a loaded weapon at school. The alert from the student came a day after the mass shooting in Florida that killed 17 at a high school.

After Chen’s first appearance in court, his defense attorneys said prosecutors had overstated the risk Chen posed when prosecutors said he been found with a “list of grievances,” in addition to the gun, a key detail that the judge cited in explaining why he held Chen in jail rather than allow him to be released on bond. Chen’s lawyers contended there was no such list and asked for a new bond hearing. That prompted the prosecutors to reply with added details on the threat they say Chen poses.

The new prosecution filing acknowledges there was no “list of grievances” found. But prosecutors indicated there was no ill-intent about using the term. They said they used that description after consulting with police for only a few minutes about the case before Chen’s first hearing, and without speaking directly with the lead detective.

In the new filings, prosecutors homed in on a journal they said Chen kept, noting entries from last spring when he wrote of feeling lonely and worthless. “I might start doing some vigilante operations,” he wrote on May 1, 2017, the court filings state. “I don’t plan on killing people, but I’m surely going to hit evil people.”

Earlier entries, some of them undated but that appear to go back to at least the spring of 2016, show Chen writing about feeling “angry at myself and mad at the world,” and about his worries he could be mentally ill, the filings state.

“Sometimes I think I am crazy or mentally ill,” he wrote, according to the prosecutors’ filing. “But I hide it and refuse to admit it because I know how to cope and blend into society but it’s just too lonely.”

“I want to kill all evil forces,” he wrote, according to prosecutors, “but I’d die for nothing.”

It is not clear whether District Judge John Moffett, who presided over the first bond-review hearing for Chen, will schedule a new one.

Chen’s attorneys, David Felsen and Jill Michaels, repeated Monday that their client should be released from jail, and nothing in the prosecutors’ new filing establishes he is a threat to others.

“The prosecutors’ own filing demonstrates he is not a risk to anyone else,” Felsen said. “Their allegation as to motive for bringing the gun to school for protection, given the circumstances in the country, is not a surprise.”

The new prosecution filing was written by Montgomery County Assistant State’s Attorney Frank Lazzaro, who also explained the lead-up to Chen’s arrest Feb. 15 after the student alerted the resource officer, Troy Melott, to the gun.

The student said he’d seen Chen carrying the gun “numerous times” since December, according to the filings. Melott and a member of the school security staff pulled Chen out of his AP Psychology class and brought him to a school security office.

The court filing states that Melott asked Chen if there was anything in his book bag.

“There is a loaded Glock 19 inside the book bag!” Chen answered, the filing shows.

The gun contained 13 live rounds, according to prosecutors.

He was arrested, and agreed to a recorded interview with a detective, in which Chen was cooperative and polite. He admitted bringing his assembled Glock to school on many occasions and “described it as a regular occurrence,” prosecutors wrote.

The new filing from prosecutors states there was a two-page, handwritten, undated document found in Chen’s backpack on the day he was arrested. Under the title “Memo,” Chen wrote he was “upset about a lot of things” and worried about anxiety and mental illness. The revised description of Chen’s writings says nothing about a “list of grievances.”

It is not clear exactly how Chen built his 9mm handgun. In an arrest warrant, and the new court papers, police and prosecutors describe the weapon as an operational Glock model 19.

“He presents an unacceptable danger to the community,” Lazzaro wrote, arguing he should remain jailed.