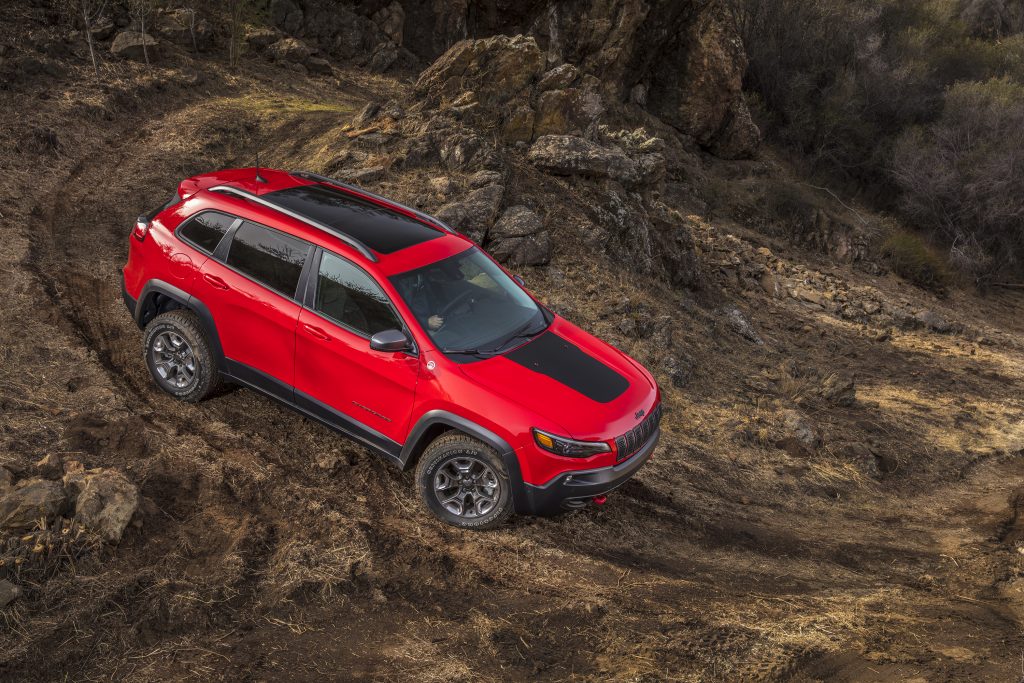 If you believe everything that you read, artificial intelligence will soon be our chauffeurs, eliminating the need for humans behind the wheel. For any number of bland sedans, having microchips pilot you to your destination would only add to their appeal.

But AI would kill the appeal of Jeeps, given that their raison d’etre is the thrill of tackling tough off-road tundra.

That said, many longtime Jeep enthusiasts would say that AI would be fine for the Jeep Cherokee, which was designed more for pokey parkways and irritating interstates than the roads less travelled, or for that matter, less paved. Sadly, most Cherokees go off-road only when accidentally running over a small shrub at the end of the driveway.

Such perceptions brought me to California to sample the 2019 Jeep Cherokee Trailhawk, where I ended up tackling terrain that few Cherokee owners would ever consider traversing. Thankfully, the same chip set that someday might have a hand in automatically driving is helping the Cherokee navigate the sort of terrain few alleged SUVs can actually tackle. Credit Jeep’s Selec-Terrain traction control system, which allows the driver to choose one of five settings: Auto, Snow, Sport, Sand/Mud and Rock, as well as Active Drive II, which locks the front and rear driveshafts, has a mechanical locking rear differential, and a crawl ratio of 51:2:1.

Inching down the hillside, I was happy to have Jeep’s legendary off-road capability in what many consumers perceive to be nothing more than a mall rat. The vehicle easily navigated California primeval with an ease that would be unimaginable in the Cherokee’s chief competitors, the Toyota RAV4, Honda CR-V and Ford Escape, all family haulers more than true compact SUVs.

That’s to be expected of a Jeep, however.

The real news is the visual revisions that occur for the new model year. Gone is the unconventionally bizarre headlight treatment that attracted and repulsed buyers, but provided a key benefit. “The initial design was aimed at breaking through and getting the conversation started, which it did. But at the same time, it’s time to broaden the reach with new styling,” said Scott Tallon, director of the Jeep brand.

This explains the Cherokee’s new front fascia, which puts the headlamps where the daytime running lamps were previously, eradicating the Cherokee’s esoteric mug. The front end is more upright, and has been raised an inch. Stylists also revised the tailgate, removing 18 pounds of weight and incorporating space for the license plate, which previously was housed in the bumper. It makes for a more attractive look.

For 2019, there are five ascending trim levels: Latitude, Latitude Plus, Limited, Overland and trail-rated Trailhawk. Most buyers choose the base Latitude or Latitude Plus with the standard 180-horsepower 2.4-liter four-cylinder engine, although the 271-horsepower 3.2-liter V6 — standard on upper trims, optional on others — accounted for nearly half of Cherokee sales last year thanks to its 4,500-pound tow rating. A third option, new for 2019, is a turbocharged 270-horsepower 2.0-liter four-cylinder engine that boasts more torque than the V6 — 295 foot-pounds vs. 239 — but offers only 4,000 pounds of towing capacity. “It’s not so much how much torque it’s making, it’s where it’s making it,” said Tallon. “The V6 has no spool-up, and the turbos generate a lot more heat. So if you’re using the turbos a lot, it’s going to create a lot more heat. We did lower the tow rating to 4,000 pounds, which is still exceptional for SUV of that size.”

The turbo is optional across all trims, and while fuel economy is the prime motivation in offering it, the new powerplant does offer other advantages. “You get a fun-to-drive factor that you didn’t have before.” He added that the new engine’s lower towing capacity versus the cheaper V6 engine isn’t an issue. “Towing isn’t everyone’s top priority. I think it’s performance, fuel economy and driving dynamics and making it a fun-to-drive vehicle. I don’t think it’s a big compromise for most people; 4,000 pounds will get most of your toys from point A to point B.”

While you might be tempted to go for the V6, the turbo four provides a dementor and power band that makes the Cherokee a formidable road warrior. Turbo lag isn’t noticeable, and the power delivery is far more enthusiastic than with other engine options. It’s almost as if the nine-speed automatic’s ratios were optimized for the turbo engine. Try it before deciding on the V6.

All engines mate to a nine-speed automatic transmission. Front-wheel drive is standard, all-wheel drive is a $1,500 option. While upper trims get Active Drive II, other models have the still capable Active Drive I, a fully-automatic system that requires no driver intervention. Driver-assistance safety features include lane-departure warning with lane-keep assist and parallel/perpendicular-parking assist.

The ride proved to have the balance that Jeep has so expertly mastered, proving well-controlled when carving through corners yet possessing enough wheel articulation in the rough.

While traversing the great unknown or the too-well known, you’ll find the cabin of the Cherokee to be most agreeable. The seats proved to be comfortable, although they lacked the side bolstering needed during off-road maneuvers. Legroom was generous up front, more than adequate in the second row. The cabin was quiet.

The instrument panel is anchored by a 7.0-, or 8.4-inch touchscreen display depending on model, and includes Apple CarPlay and Android Auto. Thoughtfully, designers have reworked the center console to incorporate a media hub that includes a USB port and 115-volt outlet.

And while a great infotainment system can make a trip more enjoyable, it’s the visual revisions on the 2019 Jeep Cherokee that demand your consideration if you’re looking for a smaller SUV. And despite its newfound sophisticated appearance, this Jeep is no mere mall rat. It’s as much fun to drive off-road as well as on, meaning that won’t want to leave the chore to a microchip.