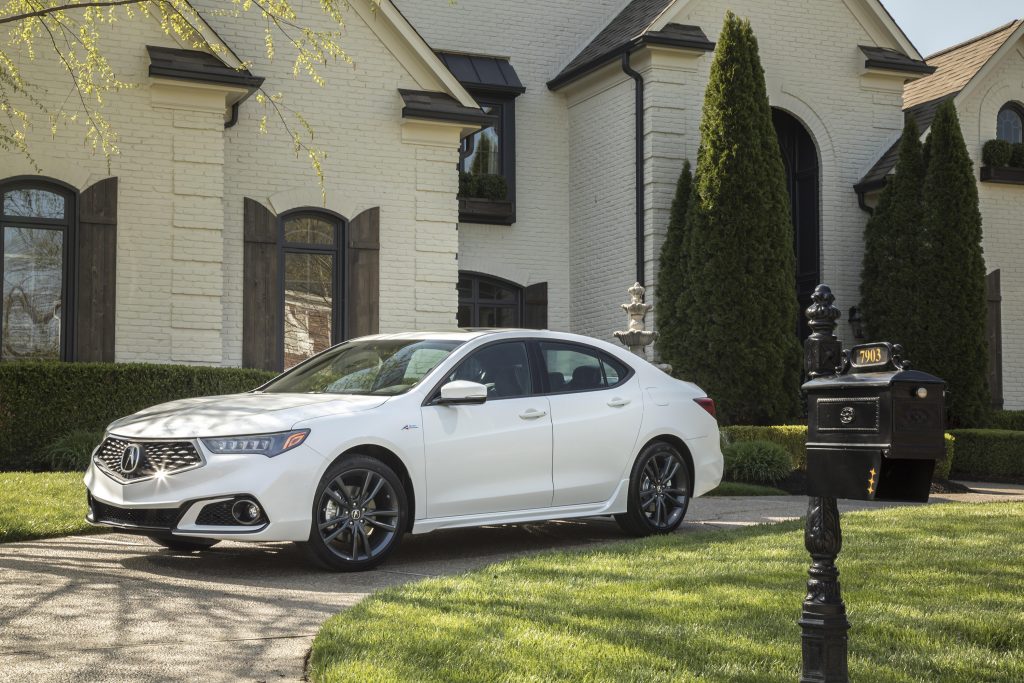 The TLX marks the merger between the TL and TSX several years ago. SH-AWD represents Acura’s torque-vectoring Super-Handling All-Wheel-Drive system. The A-Spec is new for 2018 and is Acura’s answer to those seeking a sportier drive, one that can compete with the likes of Audi A4, BMW 3-Series and Infiniti Q50.

With the A-Spec, Acura is making positive strides toward those tough foes. It gets a sharper look, is loaded with standard equipment, and receives a more sophisticated infotainment system.

Gone is the pointed beak, replaced by dark mesh grille and jewel-eye LED headlamps. A-Spec models get a black bumper, charcoal-gray 19-inch wheels, special badging and trim. At rear are dual exhausts and a black spoiler.

But the spotlight really is on performance. Kudos to engineers for the retuned electric steering and suspension systems in the A-Spec. A larger rear anti-roll bar helps stiffen the new ride and flatten the TLX on twisty roads.

The A-Spec dives into corners and leaps out with cat-like reflexes while the SH-AWD system sends power where it is needed most for peak traction. Assisting road grip on both slick and dry roads are wider Michelin Primacy MXM4 tires installed exclusively on the A-Spec.

A thick steering wheel and “active sound control” give the A-Spec its racy feel, but Acura added no extra power for the TLX lineup this year. It gets the same 3.5-liter V-6 engine that’s good for 290 horses and 267 pound-feet of torque. Those numbers fall short of the competition but it’ll get to 60 mph in 5.9 seconds, says Acura, and has a top speed of 134 mph.

The engine is mated to a 9-speed transmission that sometimes is slow to respond both on the upshift and the down. Paddle shifters can do a little better. Best to keep it in Sport-Plus mode, which improves steering and throttle response. Other drive-select modes include Econ, Normal and Sport.

EPA estimates fuel economy at 20 mpg around town, 29 on the open road, for a combined figure of 23 mpg.

Inside the five-passenger sedan, available with black or red color schemes, are multiple improvements. Leather sport seats are ventilated and heated and adjust with 12-way power function. They are nicely bolstered but not annoyingly so, and have cool Alcantara inserts and contrast stitching. A black headliner adds a touch of elegance.

There’s plenty of room up front for heads and legs, but the back seat is tight for this segment. Trunk space is OK but an odd-shaped opening may cause a couple of banged fingers.

The infotainment system features Acura’s new touchscreen and many will be glad to see it’s now compatible with Android Auto and Apple CarPlay. They appear on the top of the dual-screen system, while audio and climate functions are operated on the lower screen. An ELS audio system with 10 speakers comes with the Tech package.

A bonus with the TLX is that a host of features that often cost extra come standard. The AcuraWatch safety package includes forward-collision warning with emergency braking, adaptive cruise control and lane-keep assist with mitigation. The A-Spec also gets blind-spot monitoring and other goodies in the Tech package. Missing, though, is a surround-view camera.

Still, with upgrades in technology and style, plus more agility on the road, the A-Spec is a worthy addition to the conversation. That is, if you can recite the model name.

What’s all the excitement about? Acura introduces an A-Spec for the 2018 TLX, offering a bolder look and improved agility.

How’s the performance? Retuned steering and suspension and Super-Handling AWD system make the A-Spec the best performer in the TLX lineup.