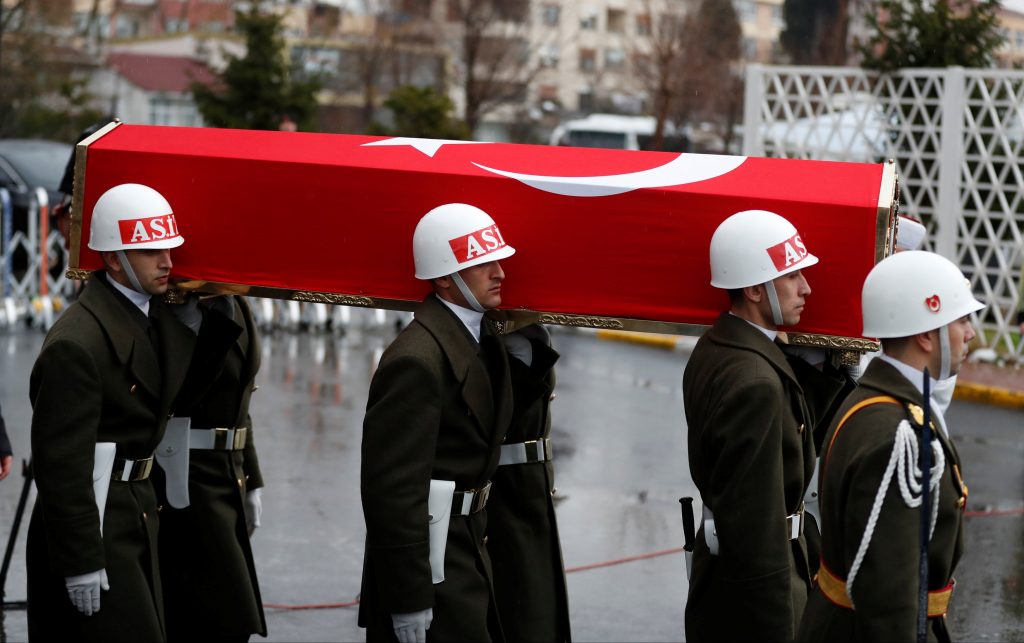 A Turkish offensive against Kurdish fighters has bogged down in the mountains and mud of northern Syria as troops encounter an adversary well accustomed to the terrain.

The Turkish military lost its advantage in the skies over the border area for much of this week after Russian forces restricted access to the airspace, according to a Western diplomat and Syrian rebels backed by the Turks. Without air cover, the lightly armed Syrian rebels, who are doing most of the fighting in the three-week-old Turkish offensive, have found it hard to advance.

Saturday was the deadliest day yet with Turkish media reporting the death of eleven servicemen.

“We are still making progress but not as fast as we did before,” said Majd Mahsoun, a fighter with the Turkish-backed Free Syrian Army. “It’s been a tough fight.”

Turkish President Recep Tayyip Erdogan launched the military operation, involving thousands of Syrian rebels, with the aim of ousting Syrian Kurdish fighters from the border enclave of Afrin. Those fighters are allied with Kurdish separatists inside Turkey, who have been locked in a brutal decades-long conflict with the Turkish state. Erdogan has framed the new offensive as a fight against terrorists.

The military campaign could reshape military and political dynamics throughout northern Syria, experts say. The fighting already poses a predicament for the United States, which sees its longtime NATO ally Turkey battling Syrian Kurdish forces that played a crucial role with American backing in defeating the Islamic State.

Trapped in the middle of this multi-sided conflict are tens of thousands of civilians, packed into basements and public buildings as casualties rise.

“We didn’t leave our homes because we couldn’t imagine they would hit civilian areas,” said Salam Hussein, a media activist in the area. “The shelling is constant, it feels like it doesn’t stop.”

On the ground and in the air, Ankara is suffering losses. At least 28 servicemen have died during the offensive, two of them helicopter pilots killed Saturday, and individual Syrian rebel battalions said that their casualties were also mounting.

Turkish-backed fighters describe Afrin’s mountains as riddled with tunnels, giving Kurdish forces the advantage in surveillance and surprise. “They’re thick and sturdy and they burrow deep into the mountains. We have to progress carefully so we can clear every one,” said Osama Akkari, a spokesman for the Almuntasir Billah group.

So far, the offensive has not progressed far beyond the Turkish border, according to Kino Gabriel, a spokesman for a U.S.-backed force comprised primarily of Syrian Kurds.

“They control 15 or 17 villages directly, but they are on the Turkish border, so we can’t consider control over even those villages as a victory for Turkey,” he said. “Even Turkey acknowledges that this isn’t a victory,” he said.

Turkish war planes had supported the Syrian rebel fighters for two weeks as they captured the highest positions around Afrin city. But on Sunday, after a Russian jet was shot down apparently by another Syrian faction, Moscow blocked Turkish access to the airspace.

That decision appeared to have been reversed late Thursday, after Turkish media outlets reported that air strikes had resumed.

Russia intervened in the war more than two years ago, to shore up Syrian President Bashar Assad, becoming one of the war’s most powerful players, and Turkey needs its support, or at least its acquiescence, to pursue any mission in Afrin.

“The decision that they took the other day to close the airspace . . . illustrates really well who has real influence in that part of Syria in terms of physical control,” said one European diplomat, speaking on condition of anonymity because he was not authorized to speak publicly on the matter.

Turkey’s state-run Anadolu news agency reported Saturday that at least 1,141 Kurdish or Islamic State fighters had been “neutralized” around Afrin since the offensive began, although the Islamic State is not known to have a presence in the area. It was not possible to independently confirm that figure.

According to the United Nations, as many as 30,000 people have fled the violence as mosques and schools open their doors to displaced families. In interviews, civilians said exit routes have at times been blocked by both Kurdish forces and Syrian troops. With smugglers charging as much as $500 per person to escape, a former Afrin resident in Turkey said his family was banding together to wire money to relatives.

“Why would they attack Afrin? It is full of civilians,” he said. “I don’t know what to say anymore. As Syrians we have no power of influence now; we’re just tinder to fuel the fires of international powers fighting over our country.”

The Turkish offensive has drawn sharp criticism from the United States, which has provided Kurdish fighters with weapons and air support to fight the Islamic State. The operation could imperil U.S. efforts in Syria to vanquish IS and al-Qaida-linked forces and to counter growing Iranian influence in the country.

Erdogan has suggested that the Afrin offensive would be followed by an operation in Manbij, a Syrian city farther to the east where U.S. troops conduct patrols. That would mark a significant escalation.

In setting his sights on Afrin and Manbij, the Turkish president has tapped into years of anger over PKK attacks. The offensive has proven broadly popular with updates splashed across Turkish newsstands and opinion polls suggesting most Turks are rallying behind the cause. Meantime, hundreds of people have also been arrested for criticizing the offensive.

In interviews with Syrian rebels who have joined Turkey’s fight, the men described Syrian Kurdish forces as “terrorists” and drew no distinction between the battle against them and the government of Assad.

Kurdish officials, on their part, called on the Syrian military last month to protect the country’s borders and act as a buffer against the Turkish offensive. Syria’s six-year-war has given Kurdish forces an unprecedented opportunity to establish autonomous areas across northern Syria. Many were captured with U.S. support.

Aldar Xelil, the co-president of a key group within the Kurdish Self Administration, the Democratic Society Movement, said talks with the Syrian government were ongoing, suggesting a potential deal that would allow Assad’s government to reassert a degree of control over the Kurdish area.

“There are negotiations with the regime now,” he said. “The regime didn’t give [us] any promises toward the democratic self-administration but practically speaking, we have surpassed that level and we are moving towards the federal project.”