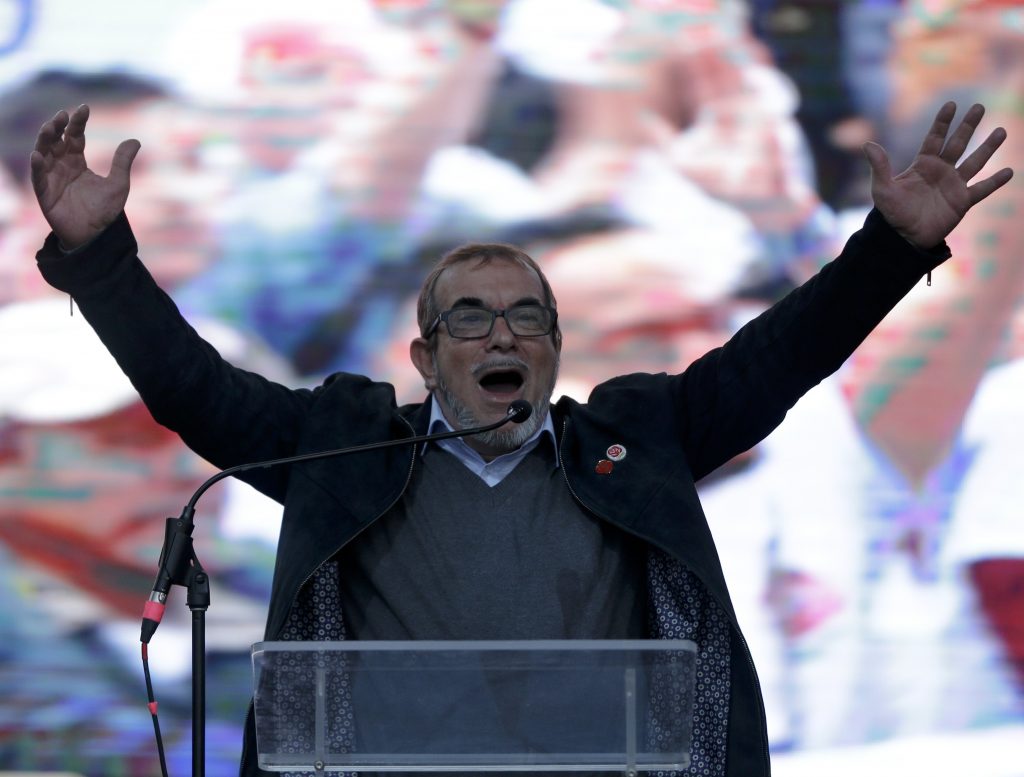 Former guerrilla leader Rodrigo Londono was once one of Colombia’s most-wanted men. Now he is a presidential contender.

The graying, spectacled man best known by his alias Timochenko launched his bid Saturday to lead the government he once battled from the jungle with a celebratory campaign kickoff featuring giant posters, colorful confetti and even a catchy jingle.

Breaking with the traditional campaign launch from a five-star Bogota hotel, Timochenko initiated his presidential bid from one of the city’s poorest, most crime ridden neighborhoods in a clear nod to the underprivileged class whose votes the ex-combatants are hoping to win. Hundreds gathered in the parking lot of a community center decorated with banners featuring a smiling Timochenko sporting a neatly trimmed beard, angular, thick-rimmed glasses, and a crisp blue shirt.

“Timo president,” a new campaign song played from loudspeakers. “For the people.”

The campaign is another historic step in transforming the Revolutionary Armed Forces of Colombia into a political party following the signing of a 2016 peace accord ending more than a half-century of conflict. The nation’s once-largest rebel group is now known as the Common Alternative Revolutionary Force, keeping its Spanish FARC acronym, and presenting a slate of former guerrillas as candidates.

Yet even as the ex-combatants ditch rebel green fatigues for simple white T-shirts emblazoned with the party’s red rose emblem there have been fresh reminders that the road to peace is filled with hazard.

Two ex-combatants were recently shot to death while campaigning for a FARC congressional candidate in northwestern Colombia. In total, 45 former FARC members or their relatives have been reported killed, according to a recent government report. Many fear a repeat of events in the 1980s, when scores of leftist politicians affiliated with the Patriotic Union party were gunned down.

On the same day as the FARC campaign’s inauguration at least four police officers were killed and another 42 injured when a homemade bomb exploded outside a police station in the city of Barranquilla, underscoring security challenges that remain even after the peace signing.

“From here on is going to be a huge test of whether the FARC’s gamble is correct: That they can practice politics without fear of being killed,” said Adam Isacson, an analyst at the Washington Office on Latin America.

Like Timochenko, the candidates include ex-guerrillas who have been convicted in Colombian courts for their part in massacres and kidnappings and whose new role as politicians has irked many Colombians. The U.S. State Department has offered a $5 million reward for anyone who helps secure Timochenko’s capture and accused him of “the murders of hundreds of people.”

The budding politicians will still have to go before a special peace tribunal, but so long as they fully confess their crimes they are unlikely to serve any jail time.

Formed in the 1960s and inspired by Marxist principles, the ex-combatants are vowing to tackle Colombia’s entrenched inequalities, though their initial proposals haven’t been as radical as many of the country’s conservatives have warned. In community meetings and ads leading up to the launch, candidates have talked about creating a subway in Bogota and a basic monthly income, an idea currently being debated throughout Europe.

“They are not proposals of a socialist, Soviet or Chavista model,” said Ivan Cepeda, a trusted conduit of both the FARC and the government, referring to the Venezuelan socialist model promoted by the late Hugo Chavez.

FARC leader and candidate Griselda Lobo, alias Sandra Ramirez, characterized the party’s ideology as being based on “principles of unity, solidarity and honesty” rather than attaching themselves to a particular political philosophy.

“That is what has characterized us as guerrillas and that is what we will bring society,” she said.

The ex-combatants are guaranteed 10 seats in congress as a condition of the peace agreement, but could capture more depending on how many votes they receive. Though Timochenko’s presidential bid is widely considered a long shot, the former guerrillas are entering politics at a time when polls show Colombians are frustrated with corruption and give the more established political parties dismal approval ratings.

“That group of thieves needs to get out,” one man told a contingent of FARC supporters recently canvassing a poor Bogota neighborhood.

The FARC’s entry into politics thus far has been emblematic of the challenges Colombia still faces in implementing the peace accord. One of the biggest concerns has been security, as an estimated 10,000 fighters return to life as civilians. Some are going home to families and communities who despise the FARC. Many Colombians are reluctant to quickly turn a page on a conflict that left at least 250,000 dead, another 60,000 missing and more than 7 million displaced.

Cepeda noted that there are key differences between the recent wave of killings and those that took place when FARC-supported Patriotic Union politicians were gunned down in the 1980s. Back then government armed forces along with paramilitary groups and drug trafficking organizations were responsible for the violence, whereas today the military is playing a key role in protecting the FARC.

“We are not in the same situation, but it is worrying that a trend has begun to appear,” Cepeda said.

The campaign kickoff drew retirees, housewives and construction workers who live in Ciudad Bolivar and said that despite the FARC’s legacy as a violent guerrilla group they were nonetheless curious to hear their proposals.

“They are human beings and like all human beings make mistakes,” said Marco Tulio, 65, a former railroad worker. “Today they are reflecting and I think it’s magnificent that people listen to them.”