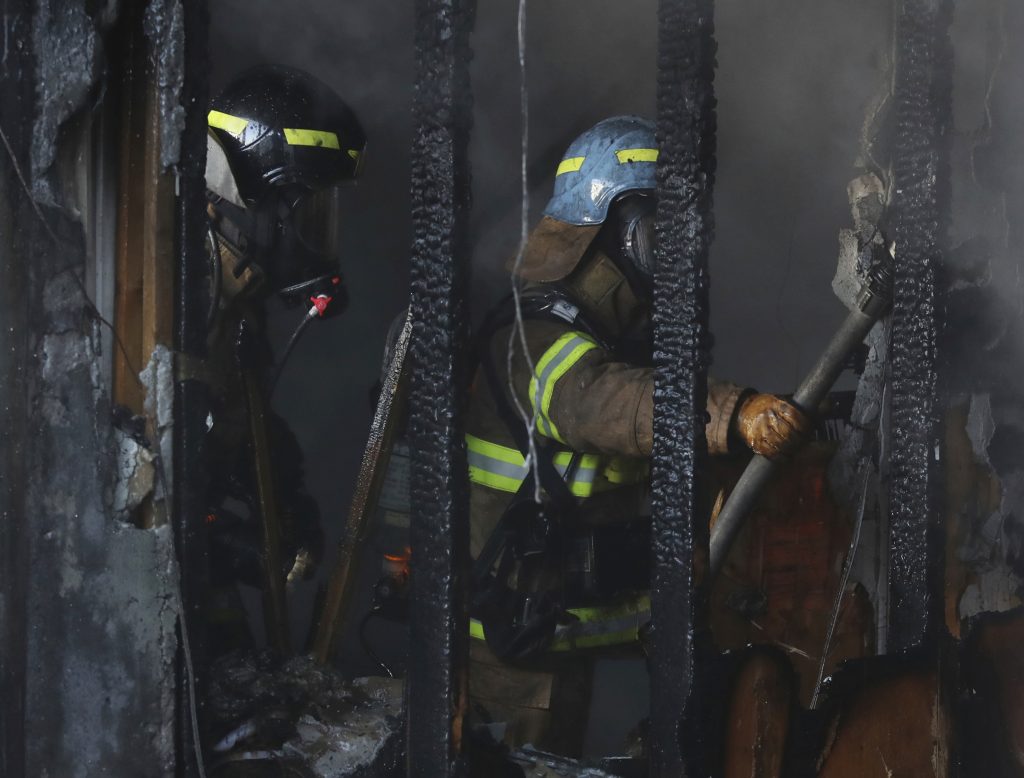 A fire spread flames and smoke through a South Korean hospital Friday morning, killing at least 37 people, mainly from suffocation, and injuring nearly 130 others in one of the country’s deadliest blazes in years. The dead included three hospital staff and several people in an intensive-care unit for respiratory illnesses.

The fire started in Sejong Hospital’s emergency room and had engulfed the first floor when firefighters arrived. They approached the second floor through the windows to rescue trapped patients, said Choi Man-wu, a fire official in the southeastern city of Miryang.

He said smoke could have spread quickly through the building’s staircase at the center, but the flames were extinguished before reaching the third floor. The cause of the fire wasn’t immediately known. The hospital’s operations were suspended after the fire.

All the dead were from the hospital’s general ward, while all 94 people being cared for in a nursing ward for the elderly were safely evacuated after the fire, some carried on the backs of firefighters, Choi said.

Ten of the injured are in critical condition, medical official Cheon Jae-kyung said in the same media briefing, suggesting the death toll could increase. The fire agency said 125 were injured, 14 of them in serious condition.

Most of the dead had been hospitalized for respiratory diseases in an intensive-care unit on the second floor. Two doctors and nine nurses were working in the emergency room at the time of fire.

Three of the dead worked at the hospital — a doctor who worked in the emergency room and a nurse and nurse assistant on the second floor, said Son Kyung-cheol, head of the foundation that operates the hospital.

Son said in a media briefing that the hospital did not have sprinklers as it was not required by law. Fire agency officials said the hospital wasn’t big enough to be required to install sprinklers.

Most of the deaths appeared to be due to suffocation, with only one suffering burns, said an official at the National Fire Agency who spoke on condition of anonymity because he wasn’t authorized to speak to media. The identification of the dead was under way, he said.

Videos from local media networks showed black smoke billowing out of the building and engulfing its entire surface. A rescuer carried on his back an elderly patient covered in a blanket as they escaped the nursing ward.

President Moon Jae-in expressed regret over the blaze at an emergency meeting convened with his senior advisers. He ordered officials to provide necessary medical supports to those rescued, find the exact cause of the fire and work out measures to prevent future fires, according to his spokesman Park Su-hyun.

South Korea is one of the fastest-aging countries in the world and has many nursing hospitals, which are preferred for elderly people who need long-term doctors’ care.

Several recent fires in South Korea have been deadly.

In late December, 29 people were killed in a building fire in central Seoul, which was the country’s deadliest blaze over the past decade before the hospital fire. Last weekend, a fire at a Seoul motel killed six people, and police arrested a man who allegedly set it ablaze in anger because he had been denied a room for being heavily drunk.

In 2014 a fire set by an 81-year-old dementia patient killed 21 at another hospital for the elderly.