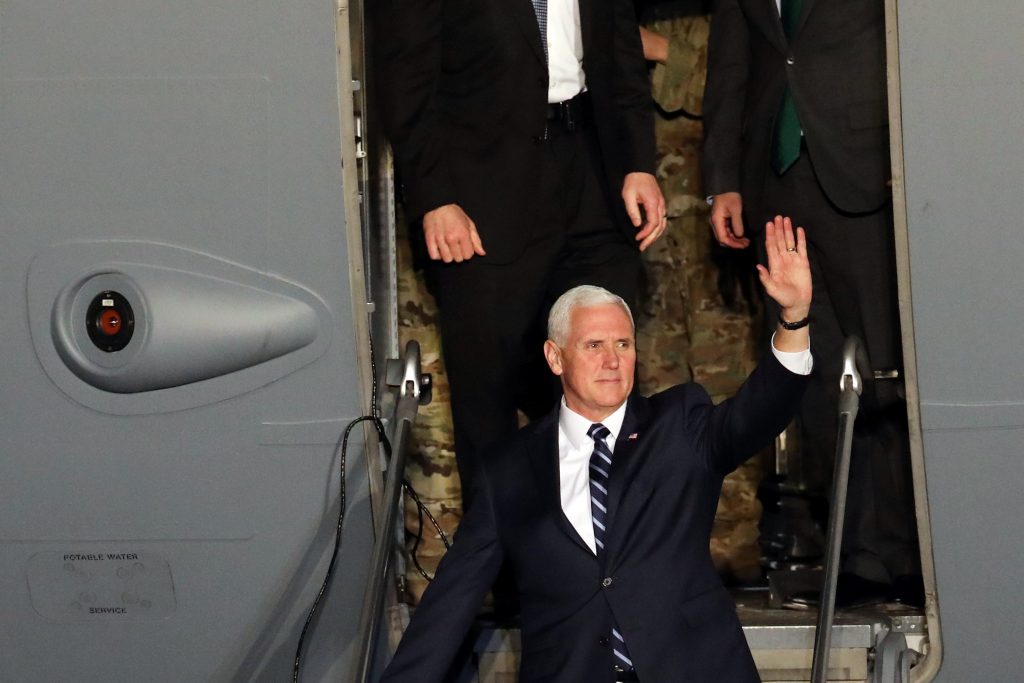 Just as U.S. Vice President Mike Pence arrived in Israel on Sunday evening, the Palestinians, not satisfied with boycotting his visit, sought to upstage it, announcing that Palestinian Authority President Mahmoud Abbas will formally ask the EU to be the new peacemakers in the Middle East, replacing the U.S.

Mr. Pence and his wife Karen arrived at Ben Gurion Airport to begin a two-day visit, and were greeted on the tarmac by Tourism Minister Yariv Levin and a modest entourage, including U.S. Ambassador to Israel David Friedman and Israeli Ambassador to the U.S. Ron Dermer.

Mr. Pence made no statement to reporters before continuing on to Yerushalayim, where he is slated to meet with Israeli Prime Minister Binyamin Netanyahu and other Israeli leaders, address the Knesset, and go to Yad Vashem.

It marks the highest-level U.S. visit to the region since President Donald Trump made his declaration on Yerushalayim on December 6 and promised to begin the process of moving the American embassy to the city.

It was reported on Bloomberg earlier in the day that Pence asked Egypt and Jordan to reach out to the Palestinians on behalf of the U.S., to tell them Washington wants to restart peace talks in the near term.

On Sunday, Pence appeared to confirm that, saying:

“The Palestinian Authority has been absent from direct negotiations since 2014. And I hope I impressed upon King Abdullah our earnest desire to restart the peace process,” Pence said.

He called his talks with the Jordanian leader “very frank.”

“Look, friends occasionally have disagreements and we agreed to disagree on the decision by the United States to recognize Jerusalem as the capital of Israel. But what we agreed on was the need for all parties to come back to the table,” Pence said.

Meanwhile, PA head Mahmoud Abbas was loudly looking for a replacement for the American interlocutors. He is scheduled to deliver a speech to foreign ministers of the European Union’s 28 member states on Monday and hold discussions with them as part of a three-day visit to Brussels.

“The president will request that the European countries help in creating an alternative to American sponsorship of the peace process,” Fatah Central Committee member Azzam al-Ahmad, who met with French President Emmanuel Macron in Paris earlier this month, told The Jerusalem Post.

“He will ask that they support the establishment of a new mechanism for the peace process in which many parties in the international community participate.”

Ahmad also dismissed an Israeli Channel 10 report that Europeans would pressure Abbas to seriously consider the promised American peace plan when the White House unveils it.

“The plan might have things you don’t like, but maybe it will also contain interesting and positive things for you. It will be a shame if you throw the plan to the trash even before you received it. Read it first and then decide if you want to say no,” French Deputy National Security Adviser Aurélien Lechevallier reportedly told Palestinian officials.

Ahmad added that Abbas will also ask the European foreign ministers to request that their governments recognize “the State of Palestine.”