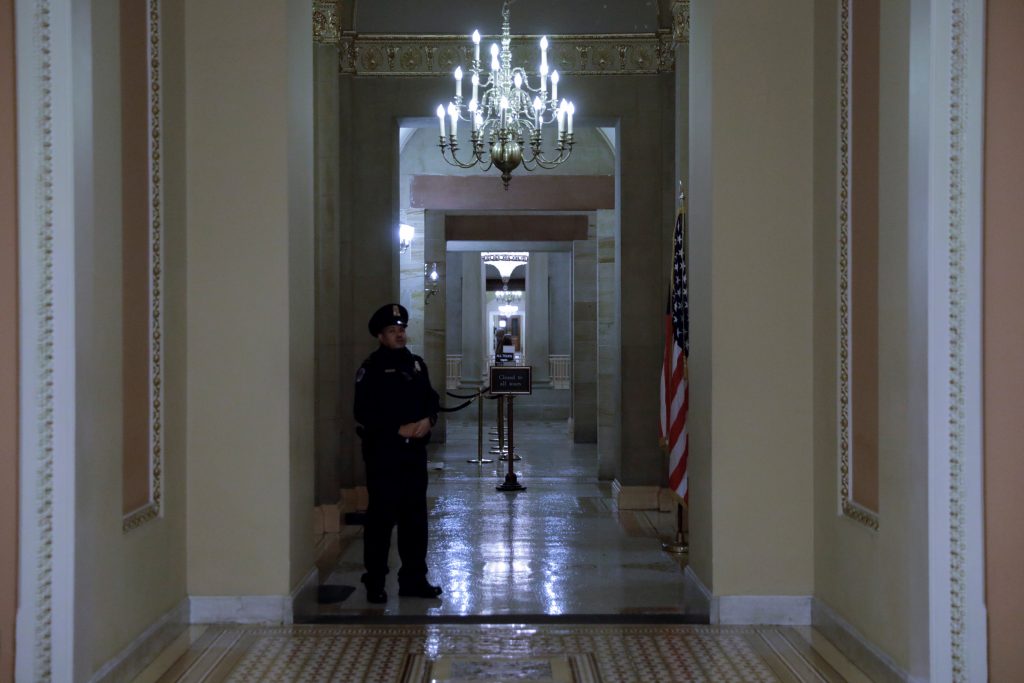 Feuding Democrats and Republicans in Congress are trying to dodge blame for a paralyzing standoff over immigration and showing few signs of progress on negotiations needed to end a government shutdown that stretched into a second day Sunday.

The finger-pointing played out in rare weekend proceedings in both the House and Senate, where lawmakers were eager to show voters they were actively working for a solution — or at least actively making their case why the other party was at fault. The scene highlighted the political stakes for both parties in an election-year shutdown whose consequences are far from clear.

“The American people cannot begin to understand why the Senate Democratic leader thinks the entire government should be shut down until he gets his way on illegal immigration,” said Senate Majority Leader Mitch McConnell, R-Ky., hours after a last-chance Senate vote failed.

Democrats refused to provide the votes needed to reopen the government until they strike a deal with President Donald Trump protecting young immigrants from deportation, providing disaster relief and boosting spending for domestic programs.

Democrats feel “very, very strongly about the issues” said Sen. Chuck Schumer of New York, the Democratic leader, adding that he believes “the American people are on our side.”

The fighting followed a late Friday vote in which Senate Democrats blocked a House-passed measure that would have kept agencies functioning for four weeks.

Republicans began Saturday hopeful they might pick off Democratic support for a three-week version and bring the episode to a quick end. Democrats are insisting on an alternative lasting only several days — which they think would pressure Republicans to cut an immigration deal — and say they’ll kill the three-week version when the Senate votes on it by early Monday.

The president resumed his social media commentary early Sunday, before lawmakers returned to Capitol Hill, tweeting that it was “Great to see how hard Republicans are fighting for our Military and Safety at the Border. The Dems just want illegal immigrants to pour into our nation unchecked.”

He suggested that if the stalemate drags on, majority Republicans should consider changing Senate rules to do away with the 60-vote threshold to advance legislation and “vote on real, long term budget.”

President Trump earlier had worked the phones, staying in touch with McConnell, while White House legislative affairs director Marc Short and budget chief Mick Mulvaney met at the Capitol with House Republicans. GOP lawmakers voiced support for the White House stance of not negotiating while the government was shuttered.
Tempers were short and theatrics high.

Lawmakers bickered over blame, hypocrisy and even the posters brought to the House floor. While neither chamber voted on a measure to open the government, the House did vote on whether a poster displayed by Republican Rep. Bradley Byrne of Alabama violated the House rules on decorum. The House voted to allow the poster, which bore a photo of Schumer and the quote “the politics of idiocy.”

Republicans blamed the breakdown on Schumer. Democrats increasingly focused criticizm on Trump, whose popularity is dismal. Democrats were using his zigzagging stance in immigration talks — first encouraging deals, then rejecting them — to underscore his first, chaotic year in office.

Republicans seemed content to hope additional Democrats will break as pressure builds and the impact of the shutdown becomes clearer. GOP lawmakers argued that Democrats were blocking extra Pentagon money by keeping government closed and thwarting a long-term budget deal.

But pressure on Republicans could mount when the new business week begins and the impact becomes more apparent to the public.

The Statue of Liberty and Philadelphia’s Liberty Bell were closed, but visitors had access to other sites such as Yellowstone. Interior Secretary Ryan Zinke tweeted a photo of him talking to students at the World War II Memorial in Washington, blocks from White House.

Social Security and most other safety-net programs were unaffected by the lapse in federal spending authority. Critical government functions continued, with uniformed service members, health inspectors and law enforcement officers set to work without pay. But if no deal is reached before Monday, hundreds of thousands of federal employees will be furloughed.

For leverage, Democrats were banking on Trump’s wobbly presidency and the GOP’s control of the White House, the House and Senate — a triumvirate that until now had never allowed a government closure to occur.

House Minority Leader Nancy Pelosi, D-Calif., called Republicans “so incompetent and negligent that they couldn’t get it together to keep the government open.”

Democrats have been seeking a deal to protect so-called Dreamers. About 700,000 of them have been shielded against deportation by the Deferred Action for Childhood Arrivals program, or DACA, which Trump halted last year. He’s given lawmakers until early March to pass legislation restoring the protections, but he’s demanded added money for his proposed border wall with Mexico as a price.