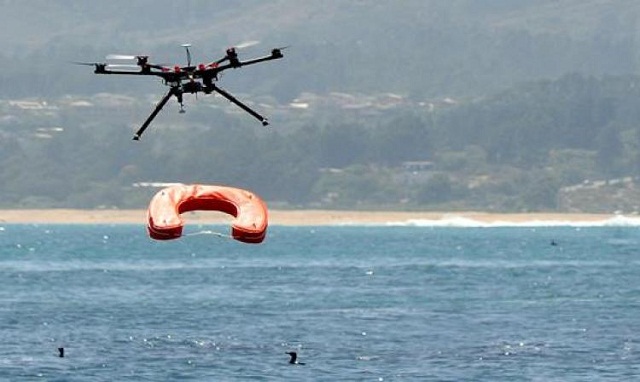 A drone rescued two swimmers off an Australian beach on Thursday, the world’s first-ever such rescue for the fast-developing technology that seems perfectly suited to saving lives at sea, authorities said.

The rescue took place as lifeguards at Lennox Head, a popular beach for surfers south of the city of Brisbane, were preparing for a training session on using drones to pull swimmers to safety.

The practice turned into a real rescue when someone noticed that two men swimming outside the safety flags were in trouble in a 10-foot swell, the government said in a statement.

Lifeguards launched the drone, steered it towards the swimmers and dropped a rescue pod into the water, where it expanded so the swimmers could grab it and swim to shore.

“Never before has a drone fitted with a flotation device been used to rescue swimmers like this,” said John Barilaro, the deputy premier of New South Wales state.

The rescue took just 70 seconds. The two swimmers were exhausted but unharmed.

Australia, most of whose 24 million residents live on the coast, had 291 drownings in the year to June 30, a small increase over the previous year but a decline on a per capita basis, according to the Royal Life Saving Society.

Forty people have drowned in the 2017/18 summer, down from 69 at the same time last year, the group said.