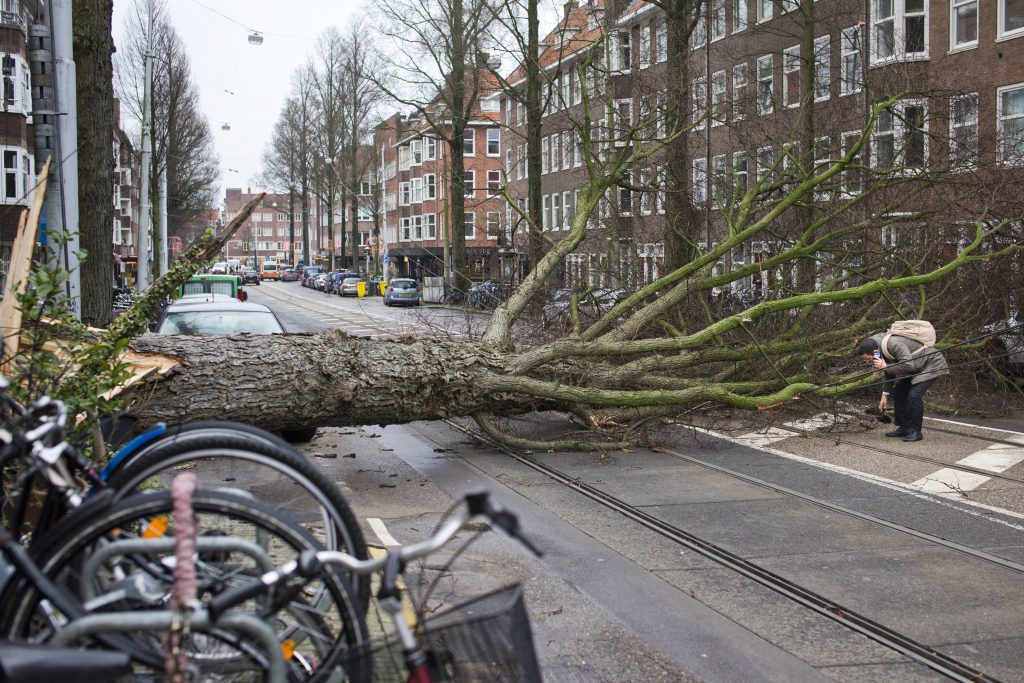 Dutch police say at least two people have been killed in separate wind-related incidents as a powerful storm lashes the Netherlands.

Dutch flag carrier KLM has cancelled 220 flights to and from Amsterdam’s Schiphol airport as a powerful westerly storm lashes the Netherlands and other parts of Europe.

The Royal Netherlands Meteorological Institute issued a Code Red, the most severe weather warning, for large parts of the country and said wind gusts reached 140 kph (87 mph) in the southern port of Hook of Holland.

In Romania, Interior Minister Carmen Dan said Thursday that about 32,000 people had no power in 13 counties across the country.  Authorities freed a bus carrying 22 people that was stranded in snowdrifts in the Galati region in eastern Romania. Snow also blanketed parts of northeastern Romania where thousands were left without power after high winds knocked down cables.

In Germany, German Railways has canceled all train services for the country’s most populous state of North Rhine-Westphalia as a winter storm moved to Germany from western Europe.

Children in many regions of Germany stayed at home because schools remained closed.

The German news agency dpa reported only a few weather-related flight cancellations flights across Germany in Munich, Hamburg, Duesseldorf and Cologne in the morning.

The storm is expected to reach western Germany around noon time and then make its way to the East during the afternoon and early evening.

Britain is suffering gale-force winds, gusting at up to 70 mph. Thousands of homes in southeast England have been left without electricity. Winds started to subside Thursday morning

In Europe, the port of Ghent has been closed because of the high winds that are lashing Belgium, the Netherlands and Germany.

Belgium set of its code orange alert — the second highest storm warning — for the north of the country early Thursday and tram traffic had to be halted in parts of the capital Brussels, where several public parks had to be closed. Trees were uprooted in several cities. Traffic at the international airport of Zaventem was largely uninterrupted. A driver was killed when a tree collapsed onto her car south of Brussels early Thursday and some were injured by flying debris in the rest of Belgium as the storm picked up in intensity during the day.