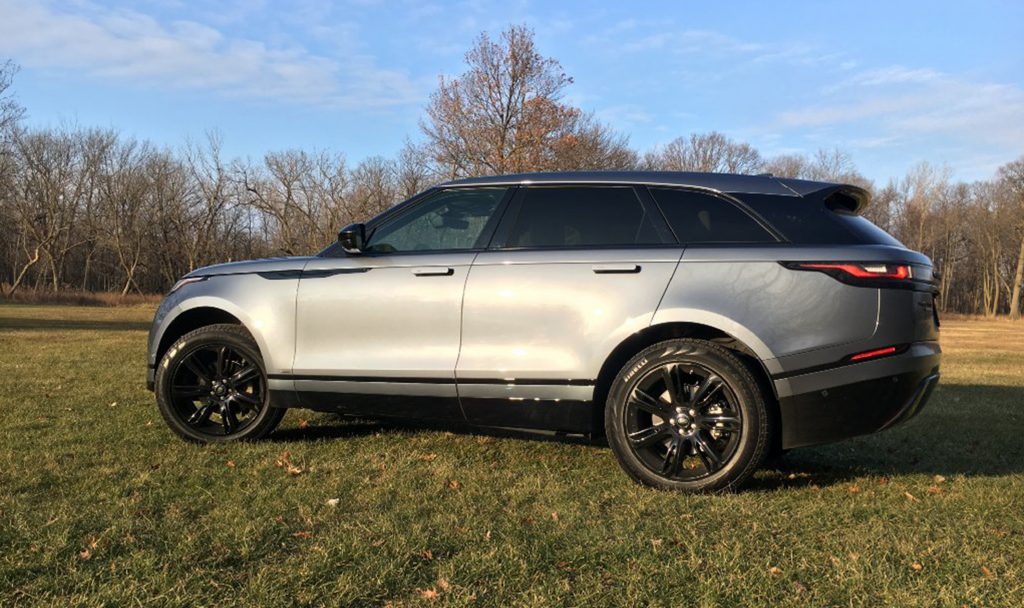 New for 2018, the Range Rover Velar enters a field flooded with luxury crossovers. Like so many overlooked middle children, it’s challenging to tell where Velar fits even within the Rover family.

The fourth crossover sibling in the more luxurious Range Rover lineage is slightly larger than Land Rover’s Discovery Sport, yet falls in line between the compact Evoque and midsize Sport. So how does it stand out?

With not one but two touchscreens.

If you’re screen-averse like me it’s not as bad as Touch Pro Duo sounds; if you prefer the smartwatch look of touch and swipe over the paneled basements known as buttons and dials, then prepare to be impressed.

Assuming you have the right gloves, of course.

The Velar is a technology showcase indicating the new double-screen direction of Jaguar Land Rover’s modernized cabins. The stacked 10-inch-wide screens blend into the dash materials, looking like glossy black finishes until the car is started and the panels illuminate. Unlike Volvo’s tablet-size do-it-all screen, these twin screens have separate functions. The upper panel tilts out of the center stack for navigation, backup camera, media, apps and such. The lower panel takes over all climate, seat, and drive mode settings. There are no dials in the console, no buttons on the stack. It’s all very clean and uncluttered.

There are two climate dials on the lower panel to adjust temps and the intensity of the heated and massaging seat functions. A menu at the top switches between climate, seats and vehicle settings, with corresponding touch-sensitive buttons. Over the course of our week with the tester, we never got familiar enough with the layout to operate it without looking down, so in that sense it’s a little more distracting than the control dial used by German luxury makes.

In subzero temperatures, we had the wrong gloves.

Fortunately, most of the media, navigation and phone commands can be accessed through the redundant steering-wheel controls. The instrument panel is another screen; in this case a customizable 12.3-inch-wide display featuring the traditional analog tach and speedo, or it can blow up the map view, or switch to one-dial display with an info panel. Techies will appreciate how Range Rover has set phasers to stun.

There’s plenty to play with, and the Spartan design matches the exterior.

Velar leans more to the sporty side of things than the SUV side. The long wheelbase and 21-inch wheels on the HSE trim give it athletic proportions, wide and low, with a long nose and short front overhang. The belt line rises as the roof line lowers, so the integrated rear spoiler and dual twin exhaust pipes make it appear from the rear more hatch than SUV. Overall, it looks Range Rover sleek, which distinguishes the brand from that homogenous field. The deployable door handles, which retract into the body when the doors are locked or at speeds over 5 mph, enhance the sophisticated stance.

The low coupe-like roofline limits rear and side visibility, and lowering the seat to its lowest position opens up headroom. Otherwise, it can be a tight fit up front. If you like to feel like you’re riding high, this is not the crossover for you. Cargo room is ample.

Range Rover might be the only brand that can bring diesel engines back from the scandal-plagued recent past into efficient powertrain relevance. The turbocharged four-cylinder engine on the tester was so quiet on the inside we didn’t know it was diesel until we checked the highway fuel economy of 32 mpg. It’s noticeable on the outside, but is more of a tick than a diesel knock. Don’t let the 180-horsepower rating fool you into thinking it’s underpowered; the 317 pound-feet of torque paired with the smooth shifting eight-speed automatic transmission powering all four wheels never lacked motivation. There are more powerful V-6 offerings for Velar but the turbo four-cylinder diesel and its EPA-estimated 28 mpg combined, is an impressive balance of efficiency and punch.

The challenge in these crossover-crazy times is to stand out, subtly. Velar is sophisticated and technologically advanced, though I’m not sure much of it is needed. But when did need ever matter much to luxury?