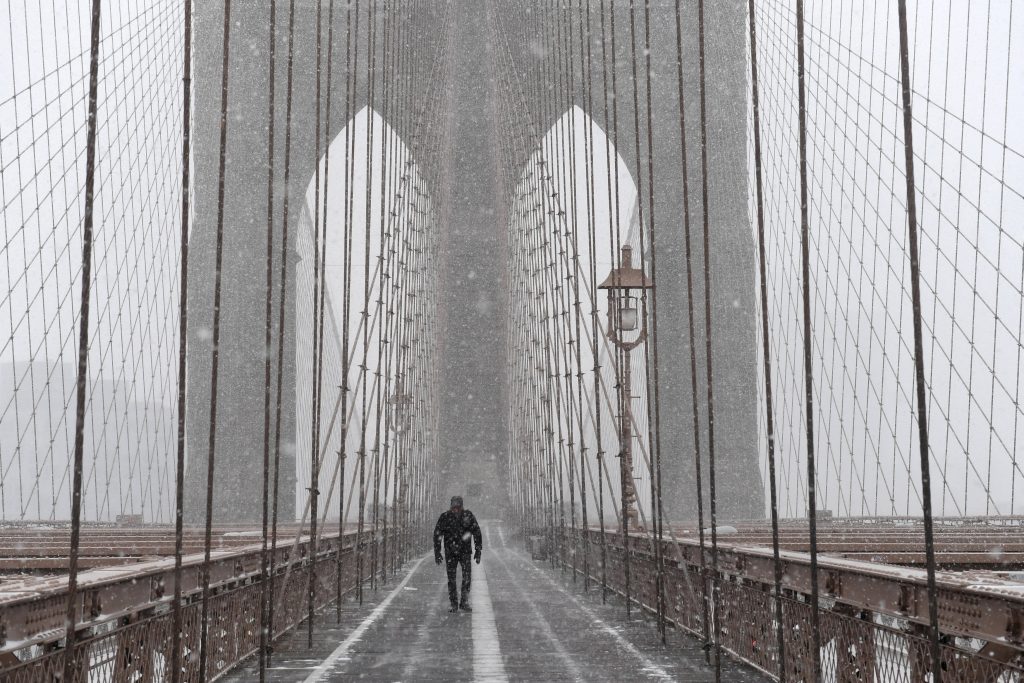 A massive winter storm roared into the East Coast on Thursday, dumping as much as 18 inches of snow from the Carolinas to Maine and unleashing hurricane-force winds that closed schools and offices and canceled thousands of flights.

Forecasters expected the system to be followed immediately by a blast of face-stringing cold air that could break records in more than two dozen cities, with wind chills falling to minus 40 in some places this weekend.

Blizzard warnings and states of emergency were in wide effect. The National Weather Service warned of wind gusts hitting almost 70 mph in some places. Eastern Massachusetts and most of Rhode Island braced for snow falling as fast as 3 inches per hour.

Motorists were warned of treacherous road conditions, and New York Gov. Andrew Cuomo cautioned that drivers were in for an “ugly, long commute.”

Three people were killed in North Carolina after their vehicles ran off snow-covered roads, authorities said.

In New Jersey, Orlando Igmat’s car got stuck in a snowbank along the Garden State Parkway in Tinton Falls as he drove to work at Verizon. He waited a half hour for a tow truck to pull him out.

“I didn’t expect it (the storm) was going to be a heavy one. That’s why I went to work today. I’m going to stay in a hotel tonight,” he said.

More than 5,500 homes and businesses lost power Thursday morning in Provincetown, Massachusetts, on the outermost tip of Cape Cod, which was being lashed with hurricane-force wind gusts, the Eversource electric utility said. Much of that power was restored by early afternoon.

In Maine, the problem was a shortage of drivers to deliver heating fuel. Small independent fuel merchants in particular were overwhelmed by customers who do not have automatic refill service, The Portland Press Herald reported.

Schools, businesses and ferry services in parts of Atlantic Canada also were shut down. Nova Scotia Power said it had more than 1,000 people at the ready in its biggest-ever pre-storm mobilization of personnel and resources.

More than two-thirds of flights in and out of New York City and Boston airports were canceled. The flight-tracking site FlightAware reported more than 3,200 canceled flights across the United States.

Rail service was affected too. Amtrak planned to operate a modified schedule between New York and Boston on Thursday. Northeast Regional Service between Washington, D.C., and Newport News/Norfolk, Virginia, was canceled for Thursday.

The storm shut down much of eastern Virginia, but some people took it in stride.

Mark Schoenenberger, a 45-year-old NASA engineer who lives in Norfolk, Virginia, put on his cross country skis so he could make a half hour trip to the bagel shop for some breakfast for his family.

The only concern he seemed to have was telecommuting while his kids were home from school. But “it’s just noise,” he said.

Waiting just behind the storm was a wave of bracing cold.

Boston expected a low around minus 11 overnight Saturday into Sunday. Portland, Maine, and Burlington, Vermont, could see minus 16 and 19, respectively, the weather service said.

State and local officials urged people to stay home so crews could clear streets and roads of snow. There were concerns in Boston and elsewhere that if roads were not properly cleared, they could freeze into cement-like ice after the cold blast arrives.

In other areas, plummeting temperatures had already caused water mains to burst.

The massive storm began two days ago in the Gulf of Mexico and first struck the Florida Panhandle.

It was so cold in South Florida that iguanas fell from their perches in trees in suburban Miami. The reptiles became immobile when temperatures dipped below 40 degrees Fahrenheit.

Green iguanas are an exotic species in Florida known for eating through landscaping and digging burrows that undermine infrastructure.

In Charleston, South Carolina, 5 inches of snow was enough for Chris Monoc’s sons, ages 4 and 2, to go sledding.

“They probably will be teenagers the next time something like this happens, and that’s kind of sad,” Monoc said. “But we’ll enjoy it while it’s here.”