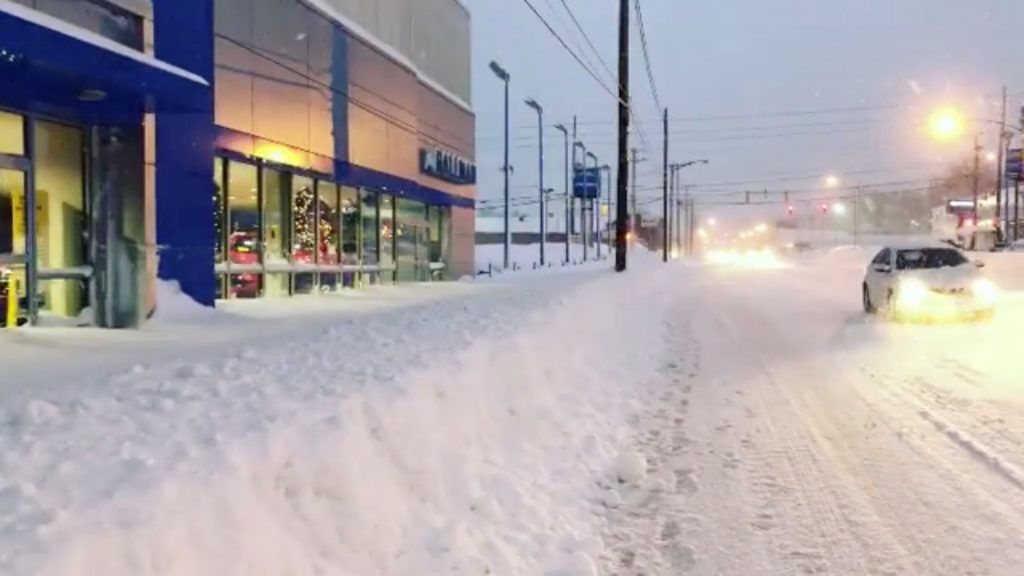 Lake-effect snow buried Pennsylvania’s fourth-largest city under more than 4 feet of snow, smashing both local and state snowfall records while hampering travel around the Great Lakes.

With snow falling at a rate of up to 3 inches per hour, the National Weather Service reported Erie, Pennsylvania, picked up 53 inches in a 30-hour period ending Tuesday morning.

Erie officials have declared a state of emergency and are pleading with motorists to stay off city streets and nearby highways, including Interstates 90 and 79.

An additional 1 foot to 2 feet of snow could fall across Erie through Wednesday.

Located along Lake Erie nearly midway between Buffalo and Cleveland — which the storm has largely spared, so far — Erie’s 99,000 residents are used to heavy snow and brutal winds. In late fall and early winter, cold air pours over the relatively warm lake waters, picking up moisture and depositing it downwind as snow.

But the heaviest snow usually falls away from the immediate lakeshore, where higher elevation helps to squeeze out the most moisture. It’s also relatively rare for the most intense snow bands to remain parked over one area for an extended period.

This time, the snow band stalled along the shoreline, clogging streets in Erie with mounds of snow. At times on Monday, parts of Erie were receiving 1 inch of snow every 15 minutes, according to accounts on social media.

In an interview, Erie Mayor Joseph Sinnott said the snow is so deep cars have been “bottoming out” in it.

“The last two decades we haven’t had as much snow as we used to have in the ’70s,” said Sinnott. “Although we have had snow, not like this, so people are not used to it. … We managed to keep the main streets as clear as possible, but the side streets are very deep, and even the SUVs are having trouble.”

Despite whiteout conditions at times, travel around Erie was complicated by residents who tried to press ahead with their travel plans.

Jane Dorler, 41, said she and her husband relied on their Toyota Tundra truck to make it to her parents’ house for a family dinner.

“We didn’t have to, but my husband wanted to, and he thought it was an adventure,” Dorler said. “We had to go 10 miles across town, and I remember when I got out onto the road, I was like, ‘they haven’t even plowed this. And I said to him, ‘this is probably the worst I have ever seen’.”

Though they passed several cars that were stuck in the snow, the couple made it to her parents’ home safely.

At times on Monday, travel lanes on Interstate 90 were blocked by stuck vehicles or jack-knifed tractor trailers. But the highway remains open, although Pennsylvania State Police are urging motorists to postpone travel if possible.

Dorler, who works at a local nursing home but is off until Friday, plans to heed that advice.

Even though even more records could fall before the storm ends, both Sinnott and Dorler expect Erie will be back up and operating normally within days.