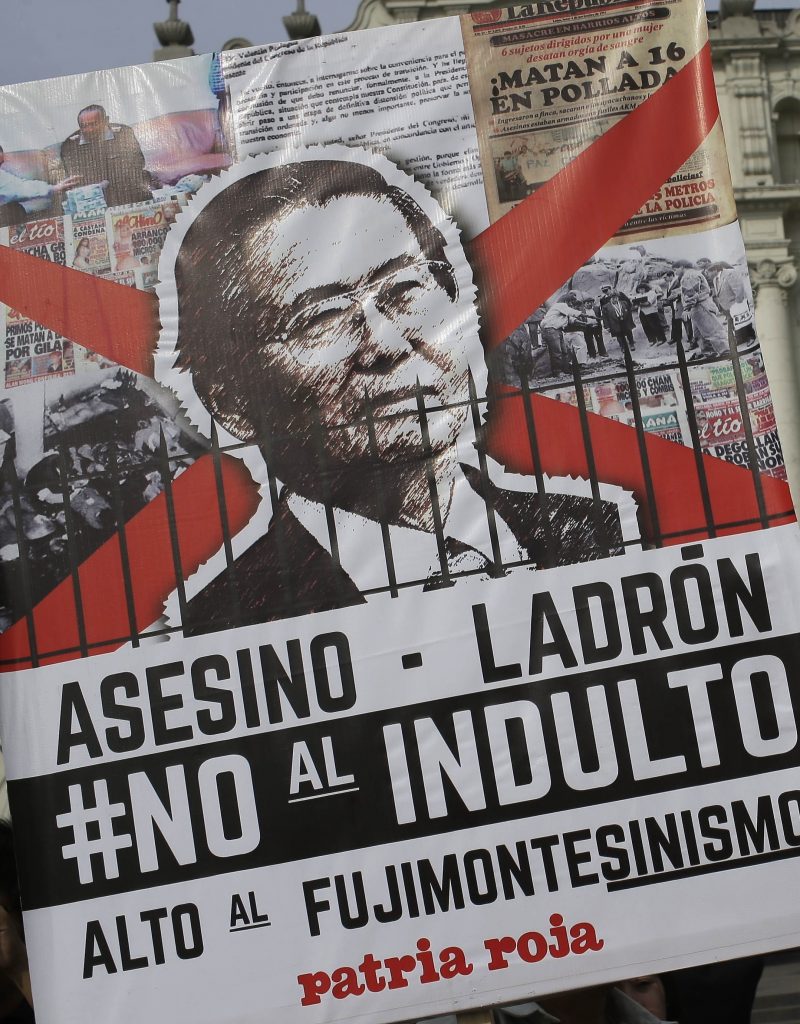 Peru’s president announced Sunday night that he granted a medical pardon to jailed former strongman Alberto Fujimori, who was serving a 25-year sentence for human rights abuses, corruption and the sanctioning of death squads.

President Pedro Pablo Kuczynski released a statement saying he decided to free Fujimori for “humanitarian reasons,” citing doctors who had determined that the ex-leader suffers from incurable and degenerative problems.

The 79-year-old Fujimori, who governed from 1990 to 2000, is a polarizing figure in Peru. Some Peruvians laud him for defeating the Maoist Shining Path guerrilla movement, while others loathe him for human rights violations carried out under his government and some human rights groups quickly criticized the pardon.

His daughter, Keiko Fujimori, narrowly lost Peru’s last presidential election to Kuczynski, and her party dominates congress. Her party mounted an attempt this month to oust Kuczynski over business ties to the Brazilian construction company Odebrecht, which is at the center of a huge Latin American corruption scandal, but the president survived the impeachment vote late Thursday.

Critics of Fujimori again raised speculation that Kuczynski agreed to pardon the former leader in return for some opposition lawmakers not supporting his impeachment.

Fujimori filed a request seeking a medical pardon more than a year ago, citing deteriorating health. He has said on his Twitter account that he suffers from arrhythmia, for which he has been hospitalized several times this year. He remained at a clinic Sunday night where he was taken from prison a day earlier after suffering a drop in blood pressure.

Keiko Fujimori and one of her brothers, Kenji, visited the clinic Sunday night. The brother later tweeted that their father would remain hospitalized a few days more.

Supporters of the former leader gathered outside the clinic to celebrate his pardon Sunday night. “He was a brave man, the best Peruvian president of all time,” said Juana Lopez.

A few dozen opponents of Fujimori demonstrated a few blocks from the presidential palace. Some protesters chanted “Kuczynski traitor” and “Killer Fujimori” while carrying posters with photographs of those slain during his decade in power.

Jose Miguel Vivanco, executive director of Human Rights Watch, said on this Twitter account that the pardon “was a vulgar political negotiation in exchange for Kuczynski’s stay in power.” Amnesty International demanded that Kuczynski “clarify the doubts about the lack of transparency and respect for due process.”

Eduardo Dargent, a political science professor at Pontifical Catholic University of Peru, predicted the president’s decision would prove to be “his worst mistake.” He said the pardon was a “mockery” for people who voted for Kuczynski in his runoff election fight with Keiko Fujimori.

Peruvian law provides that no person convicted of murder or kidnapping can receive a presidential pardon except in the case of a terminal illness. Three previous requests from Fujimori for pardons since 2013 were rejected after doctors said he did not suffer from incurable illness or severe mental disorder.

Kuczynski’s statement said a medical board had evaluated Fujimori and determined that “he suffers from a progressive, degenerative and incurable disease and that prison conditions mean a serious risk to his life, health and well-being.”

Fujimori would have been in prison until age 93 if he had served his full sentence.

He was first convicted in 2009 and sentenced to 25 years in prison for his role in the killings of 25 people, including an 8-year-old boy, during his administration. He later drew four more convictions, the most serious one charging him with knowledge of the existence of death squads financed with public money that killed civilians accused of being Shining Path members.

A former university president and mathematics professor, Fujimori was a political outsider when he emerged from obscurity to win Peru’s 1990 presidential election over writer Mario Vargas Llosa.

Peru was being ravaged by runaway inflation and guerrilla violence when he took office. He quickly rebuilt the economy with mass privatizations of state industries. Defeating the fanatical Shining Path rebels took longer but his fight won him broad-based support.

His presidency collapsed just as dramatically as his rise to power.

After briefly shutting down Congress and putting himself into a third term, Fujimori fled the country in disgrace in 2000 after leaked videotapes showed his spy chief, Vladimiro Montesinos, bribing lawmakers. Fujimori went to Japan, his parents’ homeland, and famously sent in his resignation by fax.

Five years later, he stunned supporters and enemies alike when he flew to neighboring Chile, where he was arrested and extradited to Peru. Fujimori’s goal was run for Peru’s presidency again in 2006, but instead he went to trial and was convicted of abuse of power.