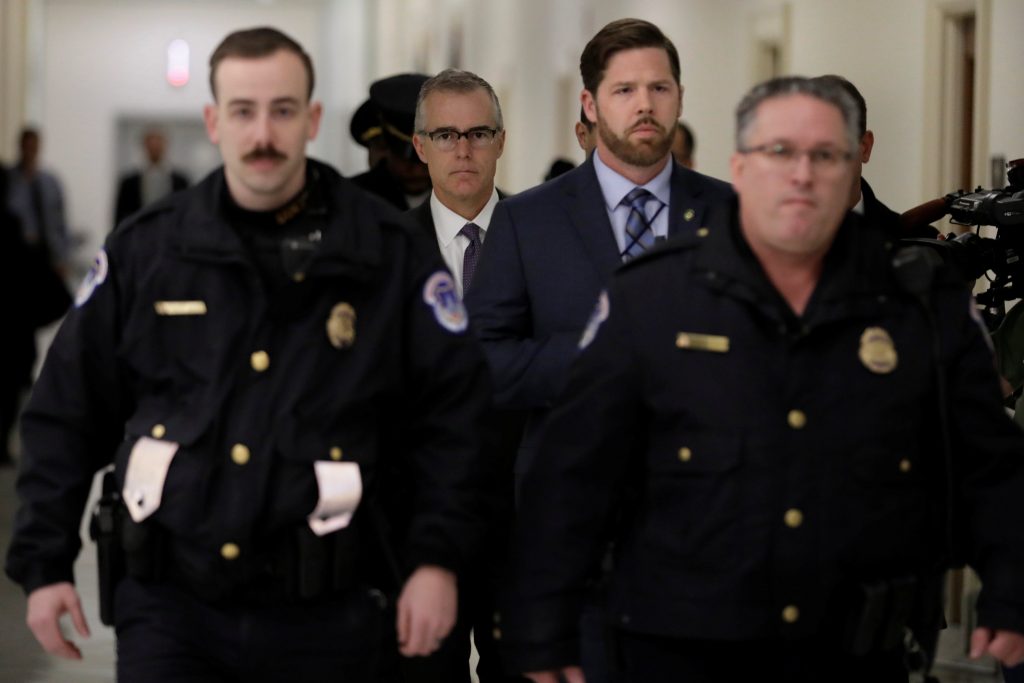 Andrew McCabe, the FBI’s deputy director who has been the target of Republican critics for more than a year, plans to retire in a few months when he becomes fully eligible for pension benefits, according to people familiar with the matter.

McCabe spent hours in Congress this past week, facing questions behind closed doors from members of three committees. Republicans said they were dissatisfied with his answers; Democrats called it a partisan hounding.

McCabe, 49, holds a unique position in the political firestorm surrounding the FBI. He was former Director James Comey’s right-hand man, a position that involved him in most of the FBI’s actions that vex President Donald Trump as well as the investigation of Hillary Clinton’s use of a private email server while secretary of state, a matter that still riles Democrats.

When Trump fired Comey in May, that meant McCabe had to stay – first to run the agency until a new director was in place and then to take the political heat for decisions made by his former boss.

Within the agency, there is praise – but also some criticism – for how McCabe has handled his role. Still, he has become a lightning rod in the political storms now buffeting the bureau. Conservatives have called for heads to roll at the FBI, and McCabe is atop many of their lists. But current and former FBI officials said it would be dangerous to appease those demands.

“It would send a terrible message to move him now, but it’s also a terrible situation he’s in,” said one law enforcement official.

Earlier this week, the FBI’s top lawyer, James Baker, told colleagues he was being reassigned, according to people familiar with the matter.

McCabe won’t become eligible for his full pension until early March. People close to him say he plans to retire as soon as he hits that mark. “He’s got about 90 days, and some of that will be holiday time. He can make it,” said one.

A spokesman for McCabe declined to comment, as did an FBI spokesman.

The pressure on McCabe has only intensified, though. He got an eight-hour grilling from the House Intelligence Committee on Tuesday and returned to Congress on Thursday to face more than nine hours of questions from the House Judiciary and Oversight committees.

Other senior FBI officials, including those who worked closely with McCabe and Comey, are expected to face similar questioning from Congress next year.

Republicans, in particular, are focusing on the FBI’s relationship with the author of a dossier containing allegations against Trump. The bureau offered to pay the author of that document after the election to keep pursuing leads and information, but the agreement was never finalized, The Washington Post reported earlier this year.

The chairman of the Senate Judiciary Committee, Sen. Charles Grassley, R-Iowa, has called for McCabe’s ouster, saying he “ought to go for reasons of being involved in some of the things that took place in the previous administration. We want to make sure that there’s not undue political influence within the FBI – the [Justice] Department and the FBI.”

Trump and his supporters have made clear they want McCabe gone, but as a civil service employee, he can’t be fired outright without some clear finding of major wrongdoing.

But within the FBI, even reassigning McCabe is viewed by many as a bad idea. It would be seen as caving to political demands and might provoke calls for additional housecleaning, according to current and former law enforcement officials.

McCabe rose quickly through the FBI’s senior ranks, only to find himself, beginning last year, the subject of intense partisan fighting about his conduct.

Republicans attacked him after reports that his wife, a Democratic candidate for a Virginia Senate seat in 2015, had received hundreds of thousands of dollars in campaign donations from the political action committee led by a close ally of the Clintons. He had also been part of discussions with Justice Department officials that critics said prevented FBI agents from more aggressively pursuing their investigation of the Clinton Foundation. Agents were trying to determine if donations to the foundation were made with an expectation of government favors from Clinton or her allies.

After reports about those issues surfaced in October 2016, then-candidate Trump singled out McCabe for criticism, and congressional Republicans demanded detailed answers from the FBI about his role in the Clinton probes – questions they insist remain unanswered.

McCabe’s role is being examined by the Justice Department’s inspector general, who has said a report on how the Clinton probe was handled should be finished by spring.

In May came Comey’s firing, which left the FBI, according to one person inside the bureau, “permanently playing defense.”

McCabe was suddenly in charge, and, according to people familiar with the matter, law enforcement officials began to investigate the president for obstruction of justice.

In early December, McCabe faced yet another controversy. The Post reported that one of his senior advisers, FBI lawyer Lisa Page, had exchanged numerous pro-Clinton and anti-Trump text messages with Peter Strzok, the top FBI agent on Mueller’s probe. Strzok was removed by Mueller when he learned of their communications; Page had left the Mueller team two weeks earlier for what officials said were unrelated reasons. In one text, Strzok texted that he thought Clinton should win “100,000,000-0.”

More problematic for McCabe is a text in which Page told Strzok, “I want to believe the path you threw out for consideration in Andy’s office that there’s no way he gets elected – but I’m afraid we can’t take that risk. It’s like an insurance policy in the unlikely event you die before you’re 40.”

Republican lawmakers have seized on that text as evidence Strzok, Page and possibly McCabe were involved in an effort to somehow ensure Trump would not win the election. But people familiar with the exchange said the officials were debating how overtly they should begin investigating Trump and that one of the factors they considered was the likelihood Trump could win the presidency – which they considered small.

Even that explanation presents a headache for McCabe because it places a conversation in his office about how the expected election outcome should or should not affect the FBI’s investigative decisions.