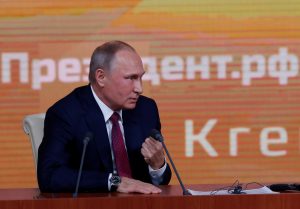 Russian President Vladimir Putin said on Thursday the United States was in the grip of a fabricated spymania whipped up by President Donald Trump’s opponents but he thought battered U.S.-Russia relations would recover one day.

Putin, who had hoped Trump’s stated desire for better ties with Russia would become reality only to see it frustrated by allegations of Russian political meddling, also praised the U.S. president for what he said were his uncontested achievements.

“I’m not the one to evaluate the [U.S.] president’s work. That needs to be done by the voters, the American people,” Putin told his annual news conference in Moscow, in answer to a question.

“[But] we are objectively seeing that there have been some major accomplishments, even in the short time he has been working. Look at how the markets have grown. This speaks to investors’ trust in the American economy.”

Trump took office in January, saying he was keen to mend ties which had fallen to a post-Cold War low. But since then, ties have soured further after U.S. officials said Russia meddled in the presidential election, something Moscow denies.

Congress is also investigating alleged contacts between the Trump election campaign and Russian officials amid fears that Moscow may have been trying to exercise improper influence.

Putin dismissed those allegations and the idea of any kind of improper Russia connection as “fabricated.”

“This is all invented by people who oppose Trump to give his work an illegitimate character. The people who do this are dealing a blow to the state of [U.S.] domestic politics,” said Putin, saying the accusations were disrespectful to U.S. voters.