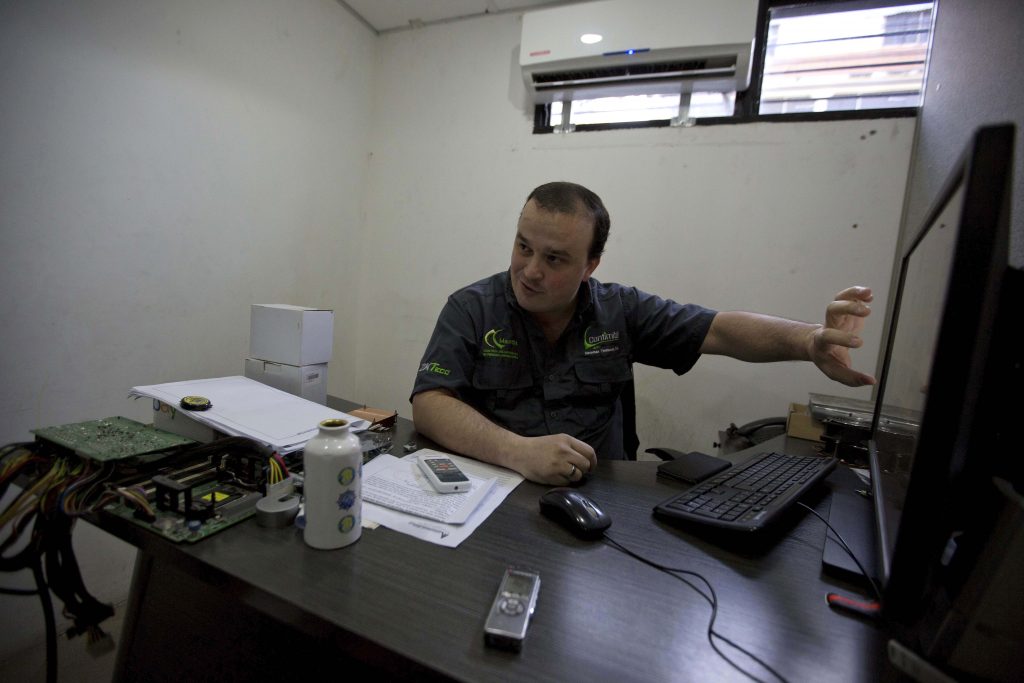 In the last month, John Villar has bought two plane tickets to Colombia, purchased his wife’s medication and paid the employees of his startup business in Venezuela — all in bitcoin.

As Venezuela’s national currency loses value at a catastrophic rate, thousands have begun turning to the world of cryptocurrency to salvage what little value remains from their increasingly worthless bolivars.

Both poor Venezuelan retirees and wealthy business leaders are converting their bolivars into bitcoins online and then using the digital currency to pay for everything from doctor appointments to motorcycles and artisanal beer. The transactions are relatively swift for anyone with a smartphone: Websites like LocalBitcoin and Colibit function as exchanges where Venezuelans can buy and sell bitcoins using a local bank account.

The shift toward cryptocurrencies in Venezuela is taking place as the price of bitcoin has climbed to a peak of more than $17,000 this month. The digital currency debuted on a major U.S. exchange with its first futures contract Sunday. But while bitcoin is a speculative venture in developed nations, in Venezuela it has become a tool to keep families afloat, with some Venezuelans purchasing a small fraction of one coin to build their savings.

The number of Venezuelans using cryptocurrencies remains unclear, but weekly bitcoin trading volume through one popular website has soared from about $225,000 earlier this year to nearly $2.1 million in the first week of December — this in a country where the monthly minimum wage fetches less than $2 on the black market. According to a data website, that’s far higher than the value of bitcoin transactions on the same website seen in more prosperous nations across the region, including Argentina, Brazil and Chile.

One of them is Jorge Ochoa, 34, who liquidated part of his bitcoin savings into dollars so that he could take his wife on a trip to New York City.

The flight toward cryptocurrencies in a nation where inflation in bolivar prices is projected to surpass 2,000 percent next year falls in line with what has happened in other countries stricken by war or economic collapse. Following the debt crisis in Greece, hyperinflation in Zimbabwe and unrest in Ukraine, rising numbers of distressed citizens utilized bitcoin.

In Venezuela, the so-called “crisis currency” is allowing desperate Venezuelans to make potentially life-saving purchases. Villar has been unable to find several of the medications needed to treat his wife’s multiple sclerosis in Venezuela for the last two years, a story not uncommon in a country whose public health system has been crippled by shortages. Instead, he purchased them abroad with bitcoin and used courier services to deliver them to Venezuela.

“Bitcoin is already, for many in Venezuela, not about a business opportunity,” he said.

The early Venezuelan bitcoin adopters consisted largely of engineers and business leaders, but these days Useche said he is surprised by the number of poor, elderly Venezuelans making small bitcoin purchases. While the price of bitcoin has been highly volatile, Venezuelans with few or no other means of converting their bolivars into another currency believe it is a safer bet than the Venezuelan bills that steadily depreciate from one day to the next.

“More than an asset that right now is rising in price, it is a reserve,” Useche said.

Cryptocurrencies have become so fashionable that even President Nicolas Maduro has proposed a government-backed version called the petro, and members of his administration have met with Venezuelan bitcoin entrepreneurs to determine how it might work. Though few details have been released, many in the bitcoin world have responded skeptically to the idea, saying Venezuelans won’t trust a digital currency issued by a government they have little faith in.

Still, bitcoin has its fair share of detractors, from Wall Street to Caracas. Critics point out that the digital currency’s lack of ties to any bank or government, allowing users to spend money anonymously, can facilitate illicit payments. That’s a big concern in a country like Venezuela, which is a major drug transit zone and is rated one of the most corrupt in the world.

Authorities have largely permitted trading of bitcoin in Venezuela, though they have heavily fined and detained people who use computers to earn bitcoins by auditing online cryptocurrency transactions. Such “mining” operations use immense amounts of electricity, which is heavily subsidized in Venezuela — meaning the state essentially winds up paying for the process.

At the bitcoin’s current value, one miner computer alone can now earn more than $10,000 in six months.

While there is no law on the books about mining cryptocurrency in Venezuela, not paying taxes on unreported earnings is illegal.

One Venezuelan bitcoin miner who spoke on condition of anonymity for fear of reprisal said authorities demanded he pay them $20,000 as a bribe but settled on taking 11 of his 20-some mining machines instead. He said the same officials now sometimes contact him seeking technical advice. Others interviewed for this story described being extorted by authorities who asked to be paid in bitcoin.

Even as the use of bitcoin becomes more prevalent, few businesses openly advertise that they accept cryptocurrency out of concern they will be extorted. It’s still difficult to make many purchases in Venezuela with bitcoin, so people have to convert it into bolivars to buy food and other items. Venezuelans with bitcoin can sell their digital currency on one of a half-dozen virtual exchanges filled with compatriots looking to buy bitcoin.

Dollars remain the go-to currency for many Venezuelans seeking to get rid of bolivars, but getting ahold of them can be difficult and generally requires a black market broker. Buying bitcoin eliminates the middleman because transactions can be done peer-to-peer. In addition, saving bitcoin does not require a foreign bank account. Venezuelans cannot hold dollars in a local account.

Mariana Leon, a crypto-economics consultant, said she has helped several companies in the sugar, chocolate and rum industries invest their bolivars in cryptocurrencies, keeping them in business even while other companies shuttered operations.

“The only reason they have survived is because they invested in cryptocurrencies,” she said.

For Villar, the stakes are especially high, and not just for his business. An engineer who once ran a biometrics enterprise, he is staking his financial future on the development of a game involving an alternative cryptocurrency called PepeCash. A dozen employees operate from a small office filled with computers in an industrial community east of the capital. All receive part of their salary in bitcoin. His wife, also an engineer, is now largely bound to a wheelchair.