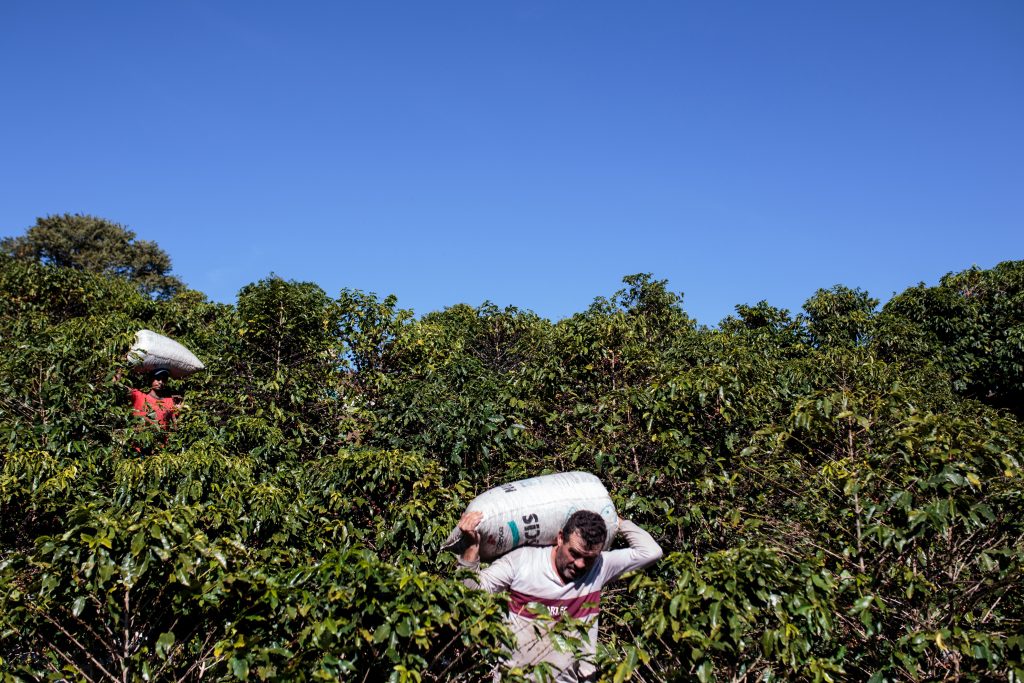 With prices for the robusta coffee she grows down 18 percent in 2017, Thom has sold just a tiny fraction of the 6 to 7 metric tons she expects to gather this season. The rest she plans to hold back until after the Tet celebrations in mid-February.

“We would suffer a big loss if we sold coffee beans at this dirt-cheap price,” said Thom, who farms in Dak Lak, Vietnam’s top growing province. “The remainder of my harvest I think I would sell in February, after Tet.”

And Thom is not alone. Eleven thousand miles away in top producer Brazil, grower Joao Luis Carneiro Vianna is holding back half of this year’s harvest, more than the usual 30 percent. The price of the milder-tasting, more-expensive arabica beans he produces is down 8 percent this year.

Such reluctance to sell too cheaply by well-capitalized farmers in Brazil and Vietnam could upset speculators’ bets that a glut will weaken the market further. Prospects of a bigger Vietnamese crop this year, a bumper Brazilian harvest in 2018 and a resulting surplus have helped drive down prices.

Export Trading Group sees a surplus of 5.5 million bags in 2018-19, said Eric Llull, a coffee research manager at the company in Switzerland.

“These are two of the countries where farmers are more sophisticated,” Jose Sette, executive director at the International Coffee Organization, said in an interview in Ho Chi Minh City. “At current prices levels, it’s not so attractive to farmers. There’s no enthusiasm for selling quickly.”

Vietnamese production is expected to rise 5 percent to 10 percent, rebounding from last year’s rain-hit harvest, according to Intimex Group, the nation’s largest exporter. In Brazil, traders expect production to expand as arabica trees enter the higher-yielding half of a two-year cycle. Some are even betting on a monster crop, with output at a record.

While increases in both countries could reverse a shortage ETG estimates at 3.1 million bags in the season that started in most countries on Oct. 1, hoarding may temporarily withdraw excess from the market. Some will also be used to replenish carry-over stockpiles that have fallen in both Brazil and Vietnam.

“What the world ignores is that the carry in this year is small, so total availability is the same” in Vietnam, Alex Gruber, a director at RCMA Commodities in the nation, said in an interview in Ho Chi Minh City. “In Brazil, the carry in is very low so the pipeline needs to be built out again.”

Coffee inventories in Brazil will fall 61 percent to 1.04 million bags by June 2018, according to Santos, Brazil-based exporter Comexim. In Vietnam, stockpiles fell 69 percent to 1.18 million bags at the end of last season, the lowest since 2011-12, the U.S. Department of Agriculture estimates.

The market is also counting on a large crop in Brazil when there’s still a lot of time before the harvest starts, said Judith Ganes, president of J. Ganes Consulting. Brazil’s crop may not be as “massive” as some traders expect, as weather conditions haven’t been ideal and there’s also pressure from disease including coffee-berry borer, she said.

“I’m not 100 percent sure that it’s going to be this massive, massive crop,” she said in an interview in Ho Chi Minh City. “This crop that everyone is talking about needed perfect conditions and we didn’t get it.”

Any unfavorable turn in the weather is also a threat as 66 percent of global production now comes from Brazil, Vietnam, Colombia and Indonesia, Nicholas Strychalski, head strategist at Cofco International, the trading unit of China’s largest food company, said at the Asia International Coffee Conference in Ho Chi Minh City. That concentration leaves the market much more vulnerable to weather shocks, according to the ICO’s Sette.

“Any weather hiccups in any of these big procures would cause a supply shortage,” Strychalski said.

While Vietnamese farmers are selling more than previously expected partly due to rising wages, that will ease as soon as they manage to cover their costs, RCMA’s Gruber said. They will continue to hold back if prices fall below $35,000 dong ($1.54) a kilogram, said Do Ha Nam, chairman of Intimex.

“We know the farmers have the coffee but obviously the market has come lower,” Jonathan Clark, general manager of Dakman, a joint venture of commodities trader ED&F Man Holdings in Vietnam, said at the conference. “Farmers don’t like the price because obviously they got higher prices last year, so it takes time for them to adjust.”

Vietnamese speculators who typically invest in assets like property have become more involved in the coffee market in the past five years, Nguyen Chi Cuong, chief executive officer at trader NC Group Ltd., said in an interview in Ho Chi Minh City Tuesday. They are able to hold large quantities of stocks to profit from rising prices later, he said.

In Brazil, many growers are organized in large cooperatives and own bigger farms, which allows them to hold back sales if prices don’t reach desired levels. The drop in the local currency also means farmers have made more money in past years.

In the country’s top arabica region of Minas Gerais, grower Vianna has gathered 1,300 bags this year but now says he only plans to sell the rest of his beans when prices reach 500 reais ($154.55) a bag, about 50 reais higher than current levels.

“I’m selling only what’s necessary to maintain cash flow,” he said. “I’m watching to see if there’s a window of better prices to sell my coffee.”