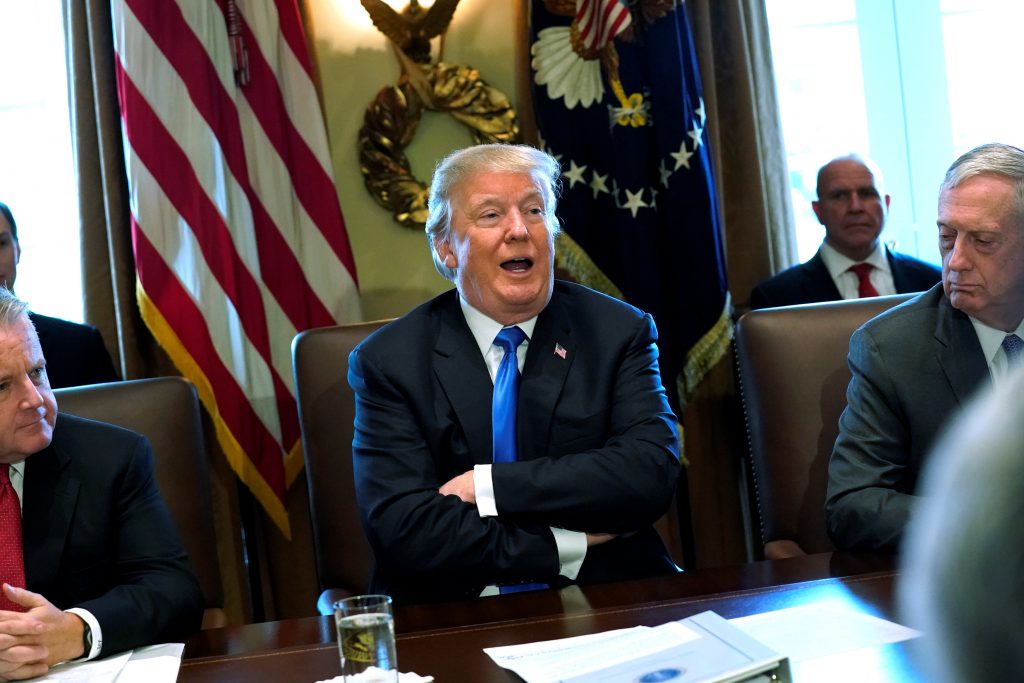 President Donald Trump raised the possibility of a government shutdown ahead of a meeting with Democrats for a second consecutive week on Wednesday, even as tensions on Capitol Hill appeared to diminish after hard-line House conservatives backed off plans to oppose a short-term stopgap.

“It could happen,” Trump said about a potential shutdown before a White House Cabinet meeting, pointing to Democratic demands on immigration policy. “The Democrats are really looking at something that is very dangerous for our country.”

“They want to have illegal immigrants pouring into our country, bringing with them crime, tremendous amounts of crime,” he added. “We don’t want to have that. We want to have a great, beautiful, crime-free country.”

Top congressional leaders from both parties are set to meet with the president Thursday at the White House as they seek a deal on lifting spending caps that would allow more funding for the military and nondefense programs. Democrats are also expected to bring up a potential deal on immigration that would include protections for at least 790,000 “dreamers,” immigrants brought illegally to the United States as children.

Plans for a meeting between the president and leading Democrats scheduled last week fell apart after Trump tweeted, “I don’t see a deal,” hours beforehand.

The issue cast then, as now, was immigration. “Problem is they want illegal immigrants flooding into our Country unchecked, are weak on Crime and want to substantially RAISE Taxes,” Trump wrote on Nov. 28.

Responding to Trump’s statement on Wednesday, House Minority Leader Nancy Pelosi (D-Calif.), in a statement did not indicate Democrats would be backing out of Thursday’s meeting.

“President Trump is the only person talking about a government shutdown,” she wrote. “Democrats are hopeful the President will be open to an agreement to address the urgent needs of the American people and keep government open.”

This week, the bigger issue for Republicans seeking to avoid a shutdown has been fellow Republicans.

Leaders of the hard-line House Freedom Caucus emerged from meetings Wednesday morning with House Speaker Paul Ryan (R-Wis.) and House Majority Leader Kevin McCarthy (R-Calif.) saying they had not yet decided whether the group’s three dozen members would back the two-week stopgap favored by the GOP leaders.

But they said they had backed off pushing for a longer-term spending bill and were instead focused on setting up a more advantageous fight with Democrats shortly before Dec. 25.

“We’re hopeful that in the next few hours we’ll be able to figure out a strategy where we don’t have to rely on any Democrats to make this work, and I think that’s what we’re all about,” said Rep. Mark Meadows (R-N.C.), the chairman of the Freedom Caucus.

Senate Majority Leader Mitch McConnell (R-Ky.), meanwhile, made a trip across the Capitol on Wednesday afternoon, meeting in McCarthy’s office with several House members. Two aides familiar with the meeting but not authorized to discuss it publicly said the lawmakers discussed the legislative agenda for weeks ahead.

After a months long detente during which they worked alongside House leaders to advance Republican health care and tax bills, the hard-liners in the Freedom Caucus have reasserted their presence this week as Friday’s shutdown deadline looms.

“They know that Republicans want to fund the military, Democrats know that,” Meadows said. “And so what they do is they hold that hostage in trying to get things that are not in the best interest of the American taxpayer, and so it is truly trying to have a real plan to break that.”

Meadows and fellow Freedom Caucus leader Rep. Jim Jordan (R-Ohio) said they are seeking to make it as difficult as possible for Democrats to oppose spending bills that hike spending on the military but not on other domestic programs.

House Republican leaders are hoping to make a show of strength this week by demonstrating they could pass an extension of funding till Dec. 22 with Republican votes alone, but the Freedom Caucus’s demands have complicated that effort. Earlier this week, the group floated a Dec. 30 expiration date, claiming it would help the GOP’s negotiating position.

Meadows backed off that proposal Wednesday: “I don’t know that the Dec. 30 deadline is as much the issue now as it is about breaking this defense and nondefense wall.”

The drama comes as House and Senate negotiators are seeking to finalize a Republican tax overhaul that would represent a crowning legislative achievement for the GOP in a year otherwise devoid of them. Different versions of the tax bill have passed the House and Senate and now must be reconciled.

Conservative leaders say they are concerned that GOP leaders may use the hoopla surrounding a final vote on the tax bill to obscure a separate vote on spending legislation that could include numerous Democratic priorities.

Earlier in the day, Meadows told reporters that conservatives were not keen on creating any “distractions” before the tax legislation becomes law.

“We’ve got to get across the finish line on tax reform, any distraction from that is a problem, and so the general consensus of most of our members is we want to talk to leadership and make sure that we’ve got tax reform on the right track, and that may allow for greater flexibility on some of the spending issues.”

Asked if a shutdown would be a distraction, he said, “Of course.”