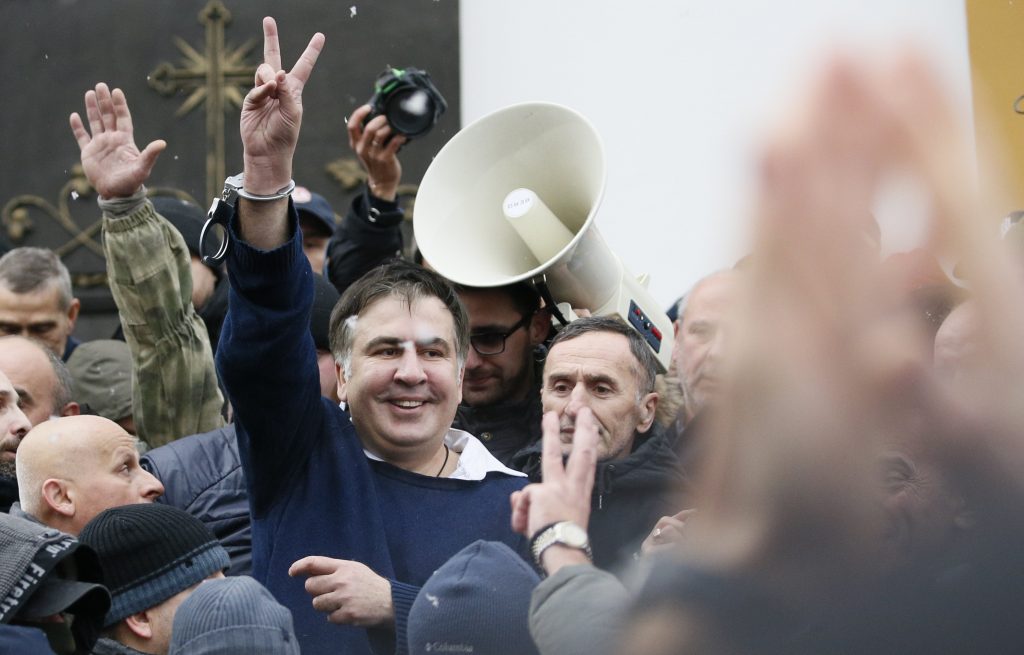 Ukrainian supporters of former Georgian President Mikheil Saakashvili freed him from a police van on Tuesday, after his detention on suspicion of assisting a criminal organization sparked clashes with police in central Kiev.

Once freed, Saakashvili, standing in a melee of supporters, called defiantly for protests to remove President Petro Poroshenko from office.

Masked officers had earlier dragged Saakashvili from an apartment in the Ukrainian capital. But his supporters prevented the police van from moving off, hemming it in and eventually freeing him by breaking its windows and back door.

Protesters also started building a barricade with tires, wood and stones – a traditional form of protest in Kiev and reminiscent of scenes from Ukraine’s 2013-14 pro-European ‘Maidan’ uprising.

“I urge you to start a peaceful protest to remove Poroshenko. You should not be afraid,” Saakashvili said through a loudspeaker to the crowd squeezed around him.

With a Ukrainian flag tied around his neck, Saakashvili led a procession of several hundred protesters toward parliament.

There was no immediate comment from police or the general prosecutor’s office on Saakashvili’s escape from custody.

His detention was the latest twist in a prolonged feud between Ukrainian authorities and Saakashvili, who was invited by Poroshenko to become a regional governor after protests in 2014 ousted a pro-Russian president.

But the two quickly fell out and Saakashvili turned on his one-time patron.

Addressing supporters earlier from the roof of the house, Saakashvili accused Poroshenko of being a traitor and a thief.

Ukraine suspects Saakashvili of receiving financing from a criminal group linked to former president Viktor Yanukovich, which planned to overthrow the current government, General Prosecutor Yuriy Lutsenko told journalists on Tuesday after he was detained.

“What next? Currently it’s not a matter of deportation or extradition [to Georgia]. It’s a matter of questioning the suspect about a particularly serious crime,” he said.

Saakashvili could face up to five years if found guilty. Georgian prosecutors said they had not been informed of Tuesday’s developments by their Ukrainian counterparts. The 49-year-old is wanted in Georgia on criminal charges which he says were trumped up for political reasons.

Saakashvili made a dramatic return to Ukraine in September, barging his way across the border from Poland despite having been stripped of Ukrainian citizenship and facing the threat of possible extradition to Georgia.

He wants to unseat Poroshenko and replace him with a new, younger politician. His supporters have camped in tents outside parliament and launched sporadic protests since his return.

“We have been waiting for it [the arrest] for months, of course, and especially in the recent weeks,” Saakashvili’s wife Sandra Roelofs told Georgian Rustavi 2 channel.

Saakashvili was made governor of the Odessa region in 2015 on the strength of the reforms he carried out in Georgia.

But he fell out with Poroshenko, accusing him of corruption, while Poroshenko’s office said Saakashvili was trying to deflect from his own shortcomings as an administrator.

Saakashvili’s supporters see him as a fearless crusader against corruption but critics say there is little substance behind his blustery rhetoric.

Back home in Georgia, where he took power after a peaceful pro-Western uprising, known as the Rose Revolution, in 2003, his time in office was tarnished by what critics said was his monopolizing power and exerting pressure on the judiciary.

He was president at the time of a disastrous five-day war with Russia in 2008, a conflict that his critics argued was the result of his own miscalculations.