New Traffic Rule: No Looking at Devices on Laps 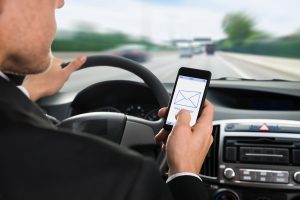 “Eyes on the road” is not just a safety measure that drivers would be wise to follow; it is now the law in Israel. As of this week, police are empowered to give out tickets to drivers they observe averting their eyes downward to glance at their personal devices. Violators can expect fines of up to NIS 500 ($145), and six points on their licenses.

According to a document outlining instructions to traffic police issued by the traffic enforcement division of the Israel Police, the rule is designed to battle “the serious phenomenon of drivers who use their devices which are resting on their laps, on the seat, or any other place that requires them to take their eyes off the road, with all the dangers that result from this.” Police who observe a driver acting this way can now pull a driver off the road and issue him a ticket.

According to police data, there is a definite connection between accidents and smart-device use, either for glancing at driving directions, making phone calls or messaging. Use of devices impedes response time and makes it difficult for drivers to recognize dangerous situations and react as needed. Police are considering seeking to pass a law that would allow them to confiscate devices from individuals who violate the law, Yisrael Hayom reported.